The trouble we expected: Dark Souls II's producer on leveling up the game

What's the key to making the Dark Souls franchise work? This interview doesn't get much closer to answering that question, but it does offering a glimpse into the thinking behind the series' development, as Bandai Namco Games prepares to release the latest edition of the title: Dark Souls II: Scholar of the First Sin.

It is both an expansion to the original title, and a new version of the core game itself for Xbox One, PlayStation 4, PC, and last-gen consoles -- with new features and new gameplay throughout the adventure.

To learn more about what makes the series tick, Gamasutra spoke to Bandai Namco's global producer on the game, Atsuo Yoshimura, who joined the franchise during development of the original game's DLC, Artorias of the Abyss.

Surprisingly, when asked about fan reaction to the title, Yoshimura opens with an acknowledgment of trouble stemming from the fact that Dark Souls II wasn't directed by series creator Hidetaka Miyazaki -- a fact that clearly haunts the team even after a successful last-generation launch.

An edited transcript of the interview, conducted in-person, follows:

People really liked the original game, and it's clear that Dark Souls II is in some ways a response to what people like about the franchise. Can you tell me how you've interpreted feedback from the fans?

Atsuo Yoshimura: We know that some fans are saying that this is not the real Dark Souls because Miyazaki-san is not involved in the actual development, blah, blah, blah. The answer is -- to me, it's no. It's sharing the same DNA. It's from the same franchise.

And although Miyazaki-san is not the director of the game, his title -- when you see it in the credits, his title is "supervisor," but I believe he's more than that. Because every time we make changes to the game, we always ask him not for his approval, but his comments, and we try to maintain the time the core element, sticking with the original idea that Miyazaki-has come up with, for Dark Souls II. 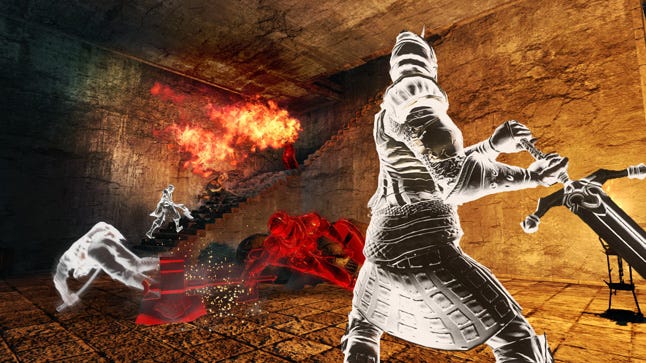 I didn't necessarily expect you to answer the question that way! Is that something that stuck out in your mind when you heard people reacting? How do you take it, when you hear these kinds of things?

AY: As expected! It always happens. It's not the case only for the Dark Souls franchise.

You put out the first version of Dark Souls II, and people seem to like it. It's been embraced. Now, you're moving into Scholar of the First Sin. How do you feel about how the community feels about the game, and how you're doing now?

AY: It's been awhile. They're enjoying it. We really keep an eye on all those online forums out there, and we keep an eye on all the suggestions and questions from the fans. I know there are certain demands about the game features, and we try to reflect all of those suggestions -- as long as they're not against our philosophy of development on the Dark Souls franchise.

The Scholar of the First Sin, we believe this is the answers to their questions and suggestions, at least at this moment. Even the team is not 100 percent satisfied with what they have created previously. That's why we've created this game from the director's cut perspective. Because in the past there were some restrictions, from the various perspectives. And this answers to all the questions and suggestions from fans.

I don't think the Dark Souls franchise would have been so successful if it hadn't had a strong vision from the developers. But as you say, people are very demanding. How do you handle that?

AY: That's a good question, a tough question! I already did mention about the indirect communication, right? That's something that makes the Dark Souls franchise so unique. That's one of the core features of Dark Souls. That's something we cannot destroy. We will basically stick on it.

[Here, Yoshimura is referring to Dark Souls mechanics such as how players can read messages left by other players, even in the single player game -- but cannot talk to co-op teammates directly, which he discussed before the interview began.]

I'm not sure if this is answering your question, but one thing I want to highlight is that people might have questions or suggestions about the difficulty level of Scholar of the First Sin, when you ask that kind of question. In terms of the difficulty level, I think Scholar of the First Sin is a little bit difficult, because of the number of enemies appearing in the certain scenes simultaneously.

However, because of the other features we have implemented, such as six-player multiplayer, and the length of the time the summoned co-op players can exist in the player's world is longer than before -- so we have implemented all these changes. 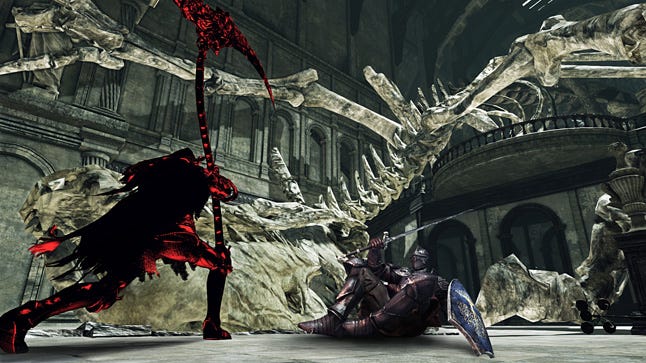 AY: The game is not just difficult; the tricky thing is that -- I don't know about the other games -- but Dark Souls is difficult but reasonable. In Dark Souls, trying again and again and again, that allows almost everybody to overcome each barrier, and at the end, everybody should be able to complete the game. That's the philosophy we have, and that's what makes Dark Souls different from other action RPGs.

One thing I've noticed is that there used to be more of a division between Japanese games and Western games. I don't think people talk that way as much anymore, and Dark Souls is part of why. It's about good games and bad games now.  Have you noticed that perception has changed?

AY: I didn't know that! I'm a little bit surprised that I've heard that kind of comment from the Western press like you. That's the first time that I got that kind of insight.

Does it make it easier to stay true to the Dark Souls franchise, because of that? Because one thing I've found is that when Japanese developers take more feedback or try to mimic Western games, it works out worse in the end.

AY: [laughs] We try to be unique, and we never try to mimic something from the features available in the Western games. So in that sense we stay to the core, yeah, of what Miyazaki-san has created for this Dark Souls franchise.