The Road to Ruinarch : Wishlist Gathering and Expectations

I discuss Ruinarch's growth in wishlist count from the initial listing on the steam store up to the day before launch.
Ryan Sumo
Blogger
August 24, 2020

Wishlist acquisition and its effects on game launches are a continuously evolving oft-argued topic among indie developers.  Which makes sense, since game launches on Steam can often make or break the long term success of a game and the livelihoods of game developers.

I'm writing this article for the purposes of tracking the wishlist acquisition process for Ruinarch and making our own contribution to pulling back the curtain and revealing more information about the business of games. I will also be making a bold and probably foolish prediction about how well we will do on Launch week.

As a quick refresher, my name is Ryan Sumo, and I am a cofounder at Squeaky Wheel, a Philippines based indie game developer currently working on Academia : School Simulator.  Last year, we signed a contract with Maccima Games to publish their Evil Overlord Simulator, Ruinarch, which is launching on August 25, 2020.  Let’s begin! 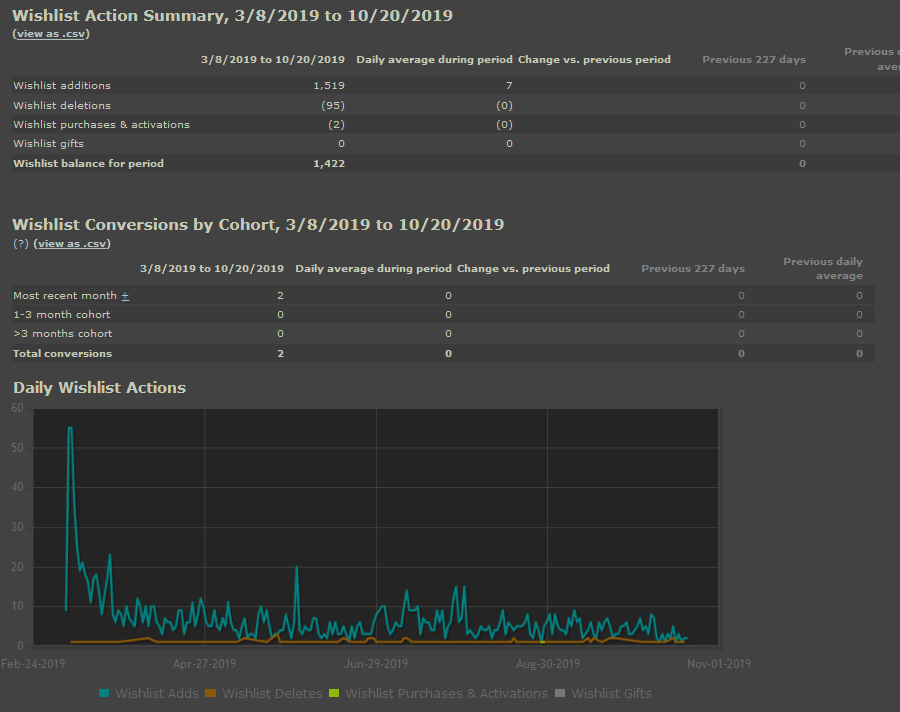 This period covers the time before Maccima and Squeaky Wheel were involved.  Starting from March 8 to October 2019, Maccima was doing its own marketing efforts for the game and netting a respectable 1422 wishlists in the process. 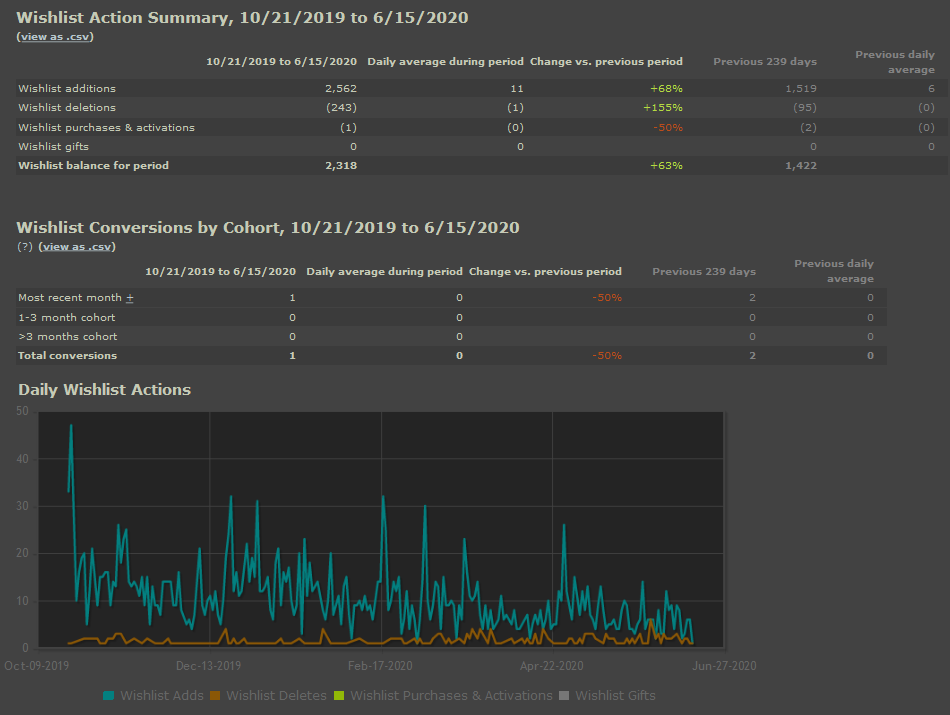 This period covers the time in which Squeaky Wheel formalized its involvement with Maccima and Ruinarch.  The initial announcement got a small burst of interest, but eventually faded away. There is a 57% increase in the daily averages from 7 to 11 wishlists a day.  Our internal target was 6000 wishlists before launch, so we were a couple thousand wishlists away.

We hired a PR company called Indie Bros to assist us with PR.  I primarily sought them out because they had worked in promoting Rimworld, and since we were talking up Ruinarch as the “anti-Rimworld” I thought they’d be a good fit.  In general they helped quite a bit with checking out our tags and store page and giving other good advice, but really I was investing in their network with streamers that had played Rimworld, which did pay off in the end. 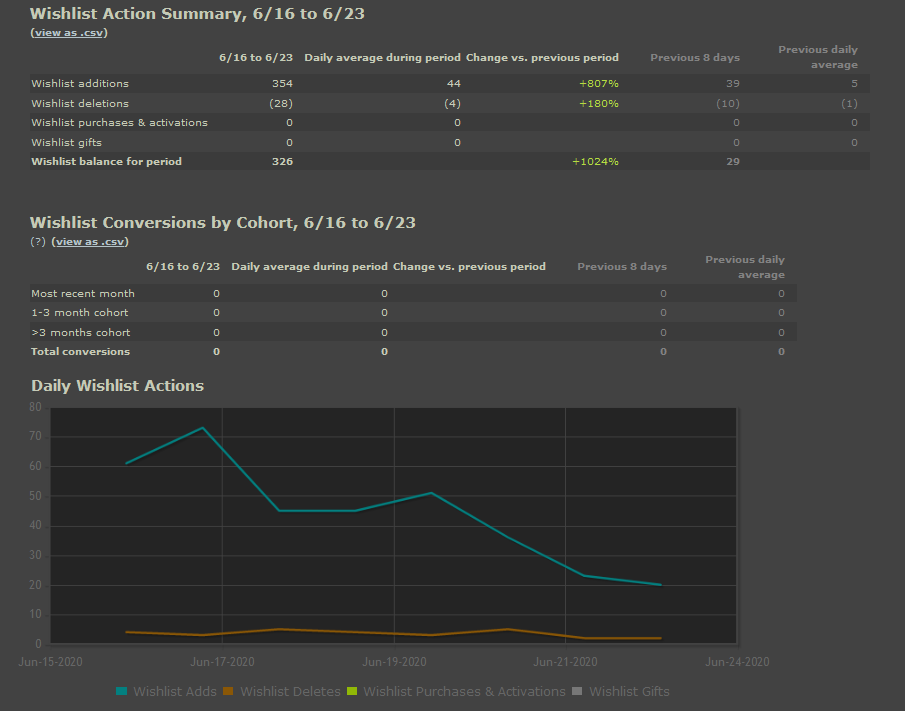 We were very excited to join the Steam Festival because we hoped this would take us to the 6000+ wishlist point. Sadly the sheer number of entries in the festival meant that we were buried in the crowd. While there was a small boost, it was hardly enough and did not really carry over into the succeeding weeks. 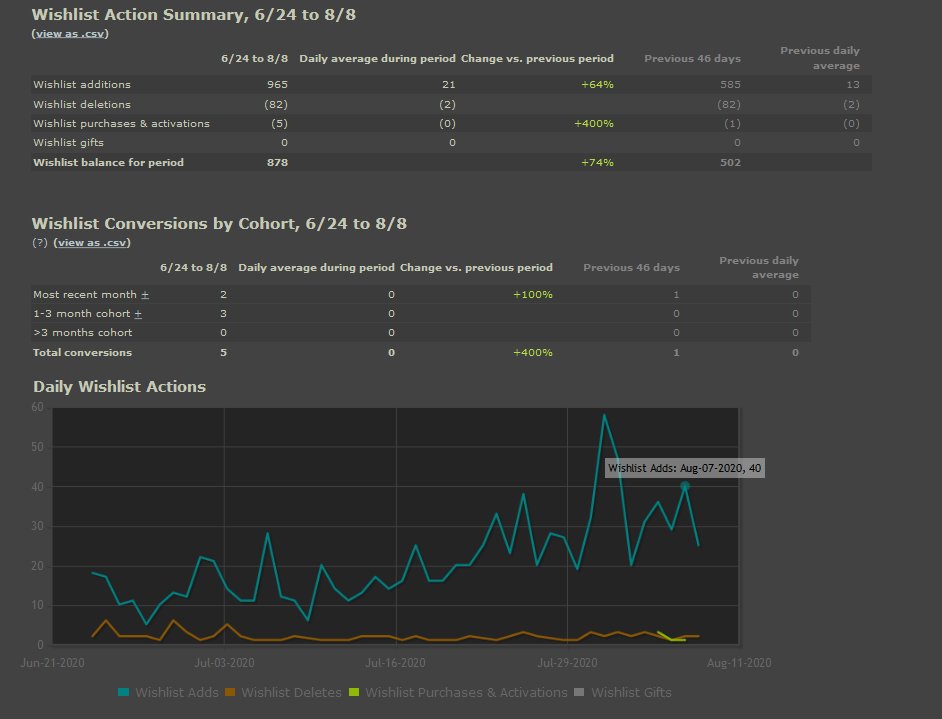 We’re quietly worried, calculating that if we maintain our progress we’ll hit 5000 wishlists but still be short of our target. I pour some more money into reddit ads (about $60 daily on selected subreddits) and it does pay off a little bit. A rough estimate would be we got 1 wishlist for every $2.50 we put in. In retrospect this seems terrible. We do get a lot of impressions this way because teh CPC is only $0.10 which may be worth it in the end?

We were also more active on Discord thanks to our new hire Shannelle, who has been doing an excellent job of managing the channels.

Leading up to launch our plans are to send out a build to select streamers 3 weeks before launch and open it up wide to all streamers 1 week before launch. We were hoping that this would have some impact. 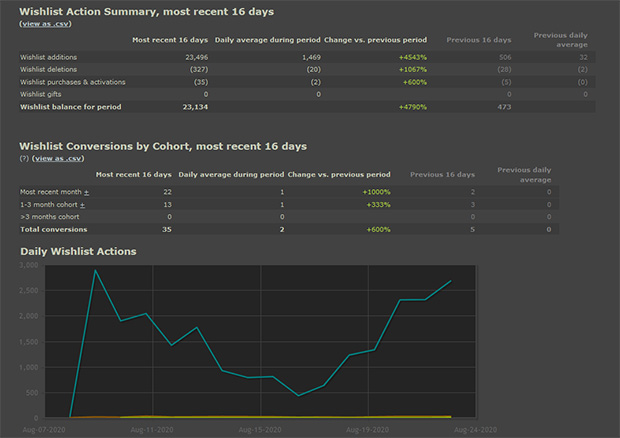 On August 9, SplatterCatGaming posted this video of Ruinarch.  On that day our wishlists shot up by 2891 (from 25 wishlists the day before), and while it decline after that, it averaged more than a 1000 wishlist per day since that point and snuck back up near launch.  This is where working with Indiebros really paid off.  While splattercat MIGHT have picked up the game on his own without us working with the Indiebros, I’m fairly certain that having them do the outreach for us helped. Other medium to large streamers like Arch and Dr Horse soon followed suit.

Separate from Indiebros we did our own outreach to folks who had played Academia : School Simulator, and every day since that first big video by Splattercat has seen me looking up new Streamers and sending them keys (I should have prepared this beforehand, but I was also busy running our company and project managing Academia).

Ruinarch was also part of the Yogscast Tiny Teams Festival, which was a great stroke of fortune. However it’s hard to tell how much of an impact it had given the event happened at the same time content creators were picking up the game.

On Friday the 21st we hit the front page of new and upcoming. I would say we were probably at around 20k wishlists at that point. Getting on the front page of new and upcoming did have a positive effect, but the effect may have been buried by other factors that seemed to be pushing our wishlists upwards, so I’m not entirely sure how much to credit it. I did notice an increase in “Home Page” visits in the Steam marketing graphs, so that might be related?

Why Names and Words Matter

One thing that I want to make clear is that I think that the guys at Maccima did a really great job with Ruinarch. They pitched the game as a story generator, knowing full well that content creation is storytelling, and they were banking that this would entice content creators and entertain their players.  I’d also like to think we did a good job with the rebranding.  Initially Ruinarch was called “World’s Bane”, which, while kinda cool in a JRR Tolkien kind of way, just doesn’t sound like a game from 2020.  We workshopped a lot of different names (My early favorite was Mendaxarch, can you imagine?!?!) and finally settled on Ruinarch as a cool and unique name, and we have to give credit to Jakub Chilaber for helping us with a really kickass logo.

The game description was also very crucial. Initially Maccima had pitched the game to people as an Evil Overlord Simulator. We all agreed that calling the game an Evil Overlord Simulator undercut the really cool art and style of the game, but it was decided that we would use that in all of our marketing material.  That means that on our Steam page, on the Ruinarch Website, and our pitches to streamers, we always led with the sentence “Ruinarch is an Evil Overlord Simulator…”.  We also dropped hints in the description and in our marketing that it’s “like Rimworld but you’re the bad guy”. Why is that important? Well for one thing it entices streamers because it’s that old advertising adage of offering something that’s similar, but different. And two, Youtubers are using those cues in their titles, which I suspect draws people’s attention.

So what does all of this mean? It seems like the combination of name, description, and cool logo are helping videos of Ruinarch outperform videos of other games by the same streamer. For example, check out these videos by Splattercat:

Notice that with the exception of “Going Medieval”, Ruinarch has more views than most of the other games within a +/- 1 week time period.

You can also see that with smaller streamers like Geek Cupboard:

Notice that most of his videos average around a thousand views, but his Ruinarch (Evil Overlord Simulator) video has 6k views.

So for whatever reason, videos of our game are generating more interest than videos from other games (even those with a much larger marketing budget for big name publishers). Taking the time to craft your name and marketing descriptions may seem like a waste of time initially, but it can pay off in very weird and unexpected ways.

After the initial flurry of activity we’re doing a soft embargo of videos until launch day, in order to maximize eyeballs at the point where players can throw money at us.  We’re also taking advantage of the fact that we now have 3 games under the Squeaky Wheel label. We’ve added Ruinarch to our complete the set Squeaky Wheel Bundle, and timed a sale and visibility boost for both Academia and Political Animals to coincide with the launch of Ruinarch.  The idea is to maximize every single opportunity to get Ruinarch in front of Steam users.

So now we’re at the end and we can do the fun part where I predict how many sales we’ll have in our first week! Jake Birkett’s original boxleiter number of 1st week sales equalling 0.5 of wishlists has been modified somewhat by Simon Carless’ updated stats. So given we have 28k wishlists as of this post, here’s my predictions for week 1 sales:

I’ll be back in a week (or a month) to let you know how it went!