Along with announcements of mid-year revenues and profits last week, on 31 October 2008, Nintendo's president, Satoru Iwata, made a presentation to investors which elaborated on Nintendo's position in the global video game market and the company's directions for the near future.

The presentation included some very interesting data. Below we have picked up on some of the more intriguing bits in Mr. Iwata's slides, and used other sources to tease a few additional figures out of the data.

Since Nintendo's presentation included graphs showing sales of the Nintendo DS and the Nintendo Wii as well as for rival platforms like the Sony PSP and Microsoft Xbox 360, we won't limit the discussion to just Nintendo and its products.

Perhaps most interestingly, Nintendo has provided somewhat detailed information that sheds some welcome light on the size of the European market.

Since the original Game Boy, Nintendo has dominated the portable game system market, a fact made crystal clear by Mr. Iwata's presentation on Friday.

The figures showed the continued rise of the Nintendo DS in the U.S. and in Europe, the decline of the Game Boy Advance, and some additional information on the health of Sony's rival PlayStation Portable (PSP).

Let us begin with this slide, comparing portable hardware sales in the United States from January through September of the last four years.

After sales of a million units in 2007, the elderly Game Boy Advance has disappeared completely from the American market. Regardless, the Nintendo DS has more than replaced the loss, nearing 5 million in sales for the year and 20% growth year-on-year.

Despite a contraction in hardware sales in 2006, Sony's PSP has sold better in 2008 than it did in 2007. Even with the modest growth of the PSP hardware market and the extraordinary growth of the Nintendo DS, the entire portable market is only modestly up in 2008 when compared to the same period in 2007.

By comparison, the entire European portable hardware market (here represented by sales figures from the U.K., Germany, France, and Spain) grew by about 20%.

Under those assumptions, Europe is now a larger market than the U.S. for portable game hardware in general and the Nintendo DS in particular.

The slide below demonstrates just how robust the Nintendo DS software market currently is in the United States.

Despite the relatively flat portable hardware market in the U.S. this year, overall software unit sales are up around 7%, from 42 million to about 45 million for the first nine months of the year.

In fact, software for the PSP was up around 18% from just under 10 million units during the first nine months of 2007, to around 11.5 million units in 2008. Regardless, the Nintendo DS remains the strongest handheld platform with 31 million software units this year, more than 2.5 times the size of the market on the PSP.

Software sales for the PSP are nearly invisible to the wider market, because few PSP titles make the top 10 or top 20 software lists released by sales trackers. However, with PSP unit sales up (as shown in the figure above), a revised hardware model on store shelves, and a newly affirmed commitment from Sony to push the platform, the PSP may make a much stronger showing in 2009.

(Regrettably, PSP software sales in 2009 may actually be harder to gauge, since Sony's focus on online distribution will make it very difficult for retail tracking firms like the NPD Group to report how much software has actually been sold through to consumers.)

There are some interesting contrasts when we shift to a view of the portable software market in Europe.

Much of the data Nintendo presented about console hardware sales in the United States has been available in the monthly media reports made by the NPD Group. For example, there is hardly anything new in the following figure showing hardware sales in the January to September period for the past four years.

Figures like the ones above are covered in the analysis of the NPD Group's monthly reports here on Gamasutra.

The most recent article, on September 2008 sales, can be found here.

The European market is mostly opaque to outside observers because relatively little hard data is released about hardware and software sales, other than software rankings.

For that reason, the following slide from Nintendo is of particular interest.

As Mr. Iwata noted in his prepared remarks, this graph retains the same scale as the corresponding graph for the United States, and therefore reveals the relative scale between the two markets. (For a direct comparison, mouse over the above image.)

Even if we figure in the extra 20% from the market outside of the U.K., Germany, France, and Spain the European market represents sales of fewer than 7.5 million consoles so far in 2008, compared to the 11 million in the United States during the same period.

Wii vs. HD Consoles in Europe

Moreover, this figure makes clear that the Wii's dominance in the United States is equally true in Europe. In both regions, Wii sales are significantly higher than the combined sales of both the Xbox 360 and PlayStation 3.

Microsoft and Sony have gone back and forth in public statements over which company's HD console is ahead in Europe. While recent price breaks on the Xbox 360 have probably changed the dynamic significantly, it is worth taking stock of the data reflected in the graph above.

(Judging from figures elsewhere in Nintendo's presentation, the figures for each console across all of Europe is roughly 40% more than the ones given for the U.K., Germany, France, and Spain subset.)

The weekly data shown in the figure below is particularly enlightening.

Except briefly at the beginning of 2008, the Wii has been outselling the PlayStation 3 and Xbox 360 in Europe. This is particularly unfortunate for the Xbox 360 which has seen two price cuts in Europe this year alone.

Even so, the PlayStation 3 has been outselling the Xbox 360 for most of the year, and only recently have the two consoles reversed fortunes.

Mr. Iwata stated elsewhere in his presentation that Wii hardware sales in Europe had reached 10.4 million units. Pulling together the weekly data shown above, sales figures from other regions, and shipment figures, we can arrive at a snapshot of Wii sales around the world at the end of 2007 and at the end of the third quarter of 2008. 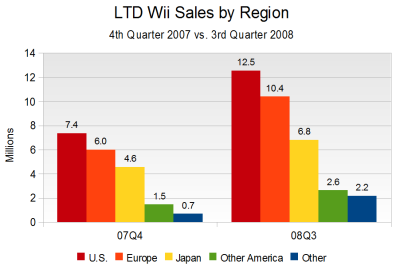 The Wii is undergoing an extraordinary period of growth in almost all regions – around 70% in the past nine months alone. Only Japan lags behind, although there the growth rate is still quite high, around 50%.

Here's one very interesting tidbit: Nintendo's European year-to-date figures are given in two different places in the presentation, once referring to all of Europe and once referring to just the U.K., Germany, France, and Spain markets.

From these figures, and data given in Nintendo's April 2008 presentation, we can estimate the following distribution of Wii sales throughout Europe as of the end of 2007. 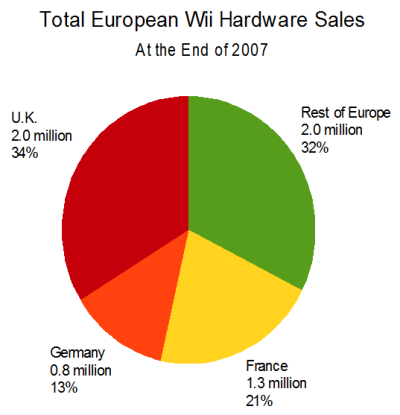 Figures for other months in which the data can be similarly analyzed appear to demonstrate an interesting rule of thumb that may be helpful in future estimates of the size of the Wii hardware market in Europe.

The rule is that the European Wii market is divided into three roughly equal submarkets: the first is the U.K., the second is Germany plus France, and the third is everyone else.

Finally, it is instructive to see where Wii hardware has ended up around the globe. 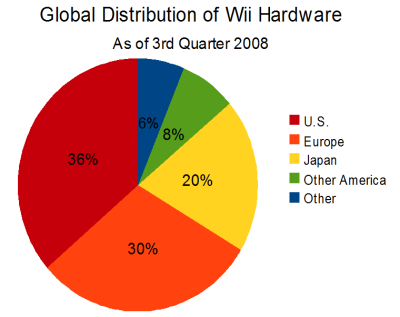 As of the end of the third quarter of 2008, around 36% of all Wii hardware has been sold to consumers in the United States.

The entire European market represents the next largest group, with 30% of all Wii hardware, followed by Japan at 20%, and the rest of the Americas with 8%. All other territories have been grouped under the heading Other and represent only 6% of all Wii consumers.

There has been an ongoing discussion about the relative strengths of first-party and third-party software sales on the Wii.

In particular, Nintendo would argue that there is plenty of room in the Wii market for both strong first-party and third-party sales.

Keep in mind that the data shown below is for the PlayStation 3, Nintendo Wii, and Xbox 360 owned after 23 months on the market, and only in the United States.

First, we have the slide shown below which gives first-party software sales.

Note that this data does not cover the entire lifespan of the Xbox 360, but it does show a dramatic increase in first-party software sales in the 23rd month.

That bump is certainly the launch of Halo 3 in September 2007. The bump in the Wii graph at month 17 is the release of Super Smash Bros. Brawl.

Perhaps the most recognizable feature on this graph is the increase in Wii third-party sales between months 12 and 13. That increase is probably due in large part to the launch of Guitar Hero III on the Wii at the end of October and through November of 2007.

On the PlayStation 3 curve there appears to be a much smaller bump in June 2008 due to the launch of Metal Gear Solid 4.

Recently Anita Frazier, analyst for the NPD Group, has commented that tie ratios "can be an indication of the health of a system", but can also be used in misleading ways.

Moreover, "as a system gets further along in its lifecycle and perhaps hardware sales start to diminish, the tie ratio tends to go up because software sales are the bigger draw. If a hardware system is doing gangbuster sales, then the tie ratio can go down even if there are lots of overall sales."

Ms. Frazier's comment that a tie ratio could go down is interesting because, while we didn't have direct evidence of it at the time, some industry-watchers suspected that the Wii's software tie ratio had been constant, or even going down, during the third quarter of 2008.

Using the above graphs and the known installed hardware bases for each system during the first 23 months on the market, we can estimate tie ratios relatively easily. 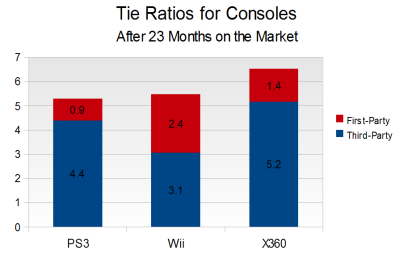 Nintendo's first-party software dominance is made manifest in the above figure, showing that Wii owners have between two and three Nintendo-published games in their libraries, on average.

By comparison, by September 2007, Xbox 360 owners had between one and two games published by Microsoft. A PlayStation 3 owner in September 2008 would have owned on average just one Sony-published game.

It is worth noting that Microsoft's current tie ratio after 35 months on the market is 8.1.

In addition to the figures above, we can examine the Wii's tie ratio during 2008 and see how it has changed. Here are the Wii's first- and third-party tie ratios graphed independently in 2008. 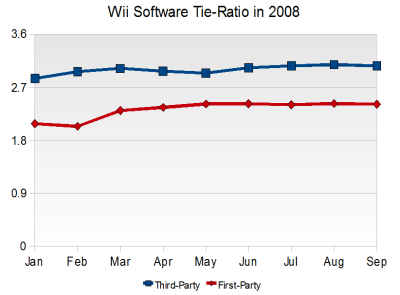 First, the effect of Super Smash Bros. Brawl, which sold 2.7 million units at release, is clearly visible in the increase of the first-party tie ratio in March 2008. Second, the tie ratio for the Nintendo Wii has been relatively constant since June.

Since Wii hardware has been selling exceptionally well from June through September, software sales must have been increasing in tandem with the hardware sales to keep the ratio constant.

Moreover, the ratio dropped just slightly from August to September, which is probably the decrease to which Anita Frazier alluded in her recent remarks on tie ratios.

The author wishes to thank Joshua J. Slone for the use of his Garaph site, which is an indispensible source for various game industry data, including the Media Create and Famitsu sales data used in this article.