In the U.S., mobile game players who spent money in game last year shelled out an average of $87 on in-app purchases: a figure that's just $5 shy of the $92 average spend of PC and console gamers.
Chris Kerr
News Editor
April 04, 2016

In the U.S., people who spent money in their mobile games last year shelled out an average of $87 on in-app purchases in free-to-play mobile games: a figure that's just $5 shy of the $92 average spend of PC and console game players.

That’s according to a new report from digital commerce analyst Slice Intelligence, which (based on data gleaned from over 4 million digital purchasers in the U.S.) also states that 10 percent of mobile users account for 90 percent of revenue from IAPs.

Slice says the above finding proves that mobile "whales" do exist, with the research firm going on to explain that the top one percent of mobile players - the elusive "white whales" - account for 58 percent of free-to-play mobile game revenue.

The company notes that such a unique spending pattern doesn’t occur in the realms of traditional gaming, where around 28 percent of the audience makes up 90 percent of game sales.

Looking at those spending patterns on a game by game basis, Slice found that the mobile game with the largest average spend was Machine Zone's Game of War: Fire Age, which has an average spend per player of $550.

Game of War was propped up by Summoners War and Big Fish Casino, which saw average spends of $272 and $232 respectively. 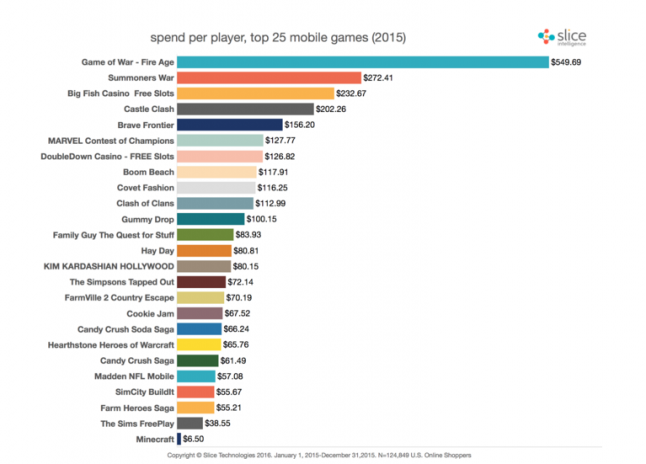