The 5 trends that defined the game industry in 2015

The game industry in 2015 had just about the usual amount of hope, despair, order, chaos, fear, courage, optimism, and pessimism as most any other year in the past four decades of video games.
Kris Graft
Publisher
December 10, 2015

Gamasutra editor-in-chief Kris Graft takes a look at the trends that shaped the video game business in 2015.
The game industry in 2015 had just about the usual amount of hope, despair, order, chaos, fear, courage, optimism, and pessimism as most any other year in the past four decades of video games. In other words, the business of games was interesting as ever.

2015 was a year that saw (another) major market shift, and new technology gaining big momentum. Here are the top five trends that defined the year.

Valve pushes for the living room PC, as industry looks on

Valve’s intention to invade living rooms with PC-based devices has been apparent for years now—it was all the way back in September 2013 when the company announced Steam Machines, which would be the solution for the living room-based PC game experiences.

But it was just over the course of 2015 that we saw the culmination of everything Valve has been talking about over the past couple of years: the vision of a standardized controller (Steam Controller), in-home streaming (Steam Link), and an overall family room-friendly experience (Steam Machine launch, significant evolution of Big Picture Mode).

There are some risks to being a trendsetter such as Valve. The Steam living room experience is mixed, and still a work in progress. It's hard to tell if Valve can expand its audience, or simply invest in an existing one. For other game companies, a push into the living room would be more of a big launch event rather than a gradual, drawn out process. But that’s the way Valve does things, and industry watchers will be keeping their eyes on the company’s efforts in 2016 and beyond.

Have you checked the top grossers on mobile storefronts lately? Looks familiar right? That’s because the top-grossing charts have been quite static over the course of 2015, when top mobile game companies and their games have dug in and, with much success, fended off competitors. That’s good for the leaders—not so good for other companies wanting to break into the top. 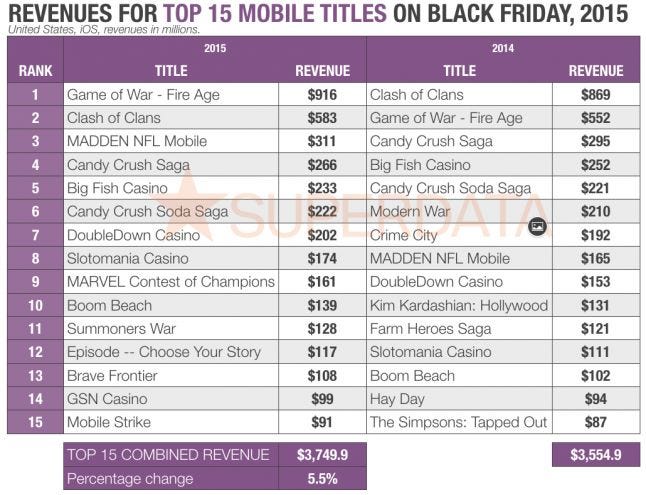 There’s a little movement there, but you get the picture: the odds are against you if you want to launch an honest-to-goodness, sustained hit in mobile games. But fortunately, as unforgiving as the market is, most game devs don’t have to make the top-grossing list for mobile game development to be worthwhile.

Streaming games and Let’s Plays have been easily identifiable trends in games for the past couple years, but in 2015, the ease of streaming and recording tech reached a turning point that democratized a movement that made players performers—and passive viewers—of games.

This ease and popularity of streaming and recording is thanks to a number of advancements in accessibility of the tech, from mobile streaming offerings like Mirrativ to the wider availability of Twitch apps. That’s not to mention an install base of tens of millions of current-gen consoles that make streaming games and uploading videos as easy as pushing a button, or the advent of Steam broadcasting.

The trend will continue to build speed for the foreseeable future. YouTube jumped into the fray with its YouTube Gaming platform, adding to the momentum, and just recently eSports company Azubu announced a major investment to help it take on Twitch and other streaming competitors. For developers, this phenomenon means new opportunities to market, develop, and design games. And more eyeballs on video games is good for the business.

The future of virtual reality firmed up in 2015, with more impressive displays of practical application in video games. This year, we saw the technology transition from last year’s “ok, that’s interesting” to more people—like me—being convinced that this is something that can truly serve video games creatively and commercially.

A few things left this impression in 2015:

-The demos at GDC for the SteamVR HTC Vive showed what VR looks like when you pair the highest-end tech with the best talent. Read my impressions of that here.

-The Samsung Gear VR is less talked about compared to its higher-end cohorts, but this mobile-based form factor has excellent potential for putting VR in front of a true mass market. Mobile VR responds to arguments against the practicality of VR (you use it in a chair, it’s portable, it’s inexpensive, and there’s already a lot of content available), and it’s also for sale right now, along with some truly standout game applications.

-PlayStation VR has a lot of support from major game companies. With 30 million-plus PlayStation 4s on the market, one has to wonder if this will be the breakout VR platform for “core” players.

What VR also is doing is creating a new marketplace; in other words, it's an open, fertile ground for refugees of the dreaded (see below)...

We all knew it was going to happen. Major marketplaces became flooded with games, revenues went down, budgets got cut. There was flash of light, then the shockwave, then the heat, which melted your face off as a final thought skipped across the wrinkles of your brain: “Welp, indiepocalypse.”

Whether or not you agree that the “indie bubble” burst in 2015 (there are arguments both ways about the true extent of the ‘pocalypse), the fact remains that this has been something on game developers' minds over the past several months.

What’s happened is that many of the things so many people desired had finally arrived—namely, more open marketplaces, more accessible development tools, and better (potential) access to a wide consumer base. The industry got its wish, and in 2015, the marketplaces matured, competition intensified, and players’ funds were split amongst many more games.

Over the year, we’ve seen the industry adjust to the ‘pocalypse: there’s a rise of “mini-publishers” that help small games break through the noise, and Steam’s discoverability algorithms have helped put games in front of potential customers, for example. But nothing has yet completely quelled the fear of failure that is at the root of the so-called indiepocalypse.

The market changed over the last year, and we have a new normal. Nothing is guaranteed, there’s no easy solution, and making a living making games remains hard--it probably got a bit harder. But hopefully the reward of making things counts for something. Welcome (once again) to game development!