Thanks to Pokemon Go, Nintendo surpasses Sony in terms of market value

The striking popularity of Niantic and The Pokemon Company's Pokemon Go mobile augmented-reality game continues to inspire investor confidence in backer Nintendo, which has now surpassed competitor Sony in terms of market value.

It's a market milestone that shows how Nintendo's fortunes have rebounded in the past week or so thanks to the (initial) success of a single game. The company set a new record on the Tokyo stock market yesterday, and today Bloomberg reports that Nintendo's market value climbed to $39.8 billion -- just a bit more than Sony's own 38.38 billion.

However, it's important to note (see chart below) just how outsized and sudden this influx of investor interest is -- and how suddenly it could slip away if Pokemon Go does.

At least one financial analyst believes that while this remarkable upswing in Nintendo's fortunes is good news for the company, it will likely be difficult for Nintendo to continue at this valuation if either its upcoming slate of mobile releases or its impending console launch, codenamed "NX", fail to be Pokemon Go-esque successes.

"Pokemon Go is a genuine phenomenon − just after little over a week, it has added US $19 billion to the value of Nintendo," Deutsche Bank analyst Han Joom Kim told Bloomberg yesterday. "We need to see further hard evidence to model in significant further upside."

Game developers, of course, have their own reasons for being excited about the design and success of Pokemon Go. 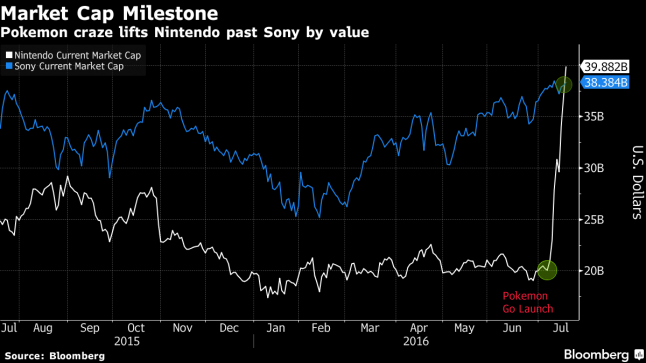