These days, it's not just about generalized farming -- you can run your own vineyard on Facebook, too. What's the pull of that kind of targeted theme -- unthinkable in recent years for games? Gamasutra investigates.
Game Developer
Staff
June 08, 2010

As the popularity of social and casual games continues to rise, differentiating yourself from your competitors via careful targeting -- and exploring themes that are nontraditional for games -- might provide an advantage.

Instead of creating games that appeal to a broader population -- for instance, one that that's highly generalized, like the wildly popular FarmVille or Diner Dash -- they seem to be targeting, say, connoisseurs of specific foods, like wine lovers in the Facebook game My Vineyard or chocolate aficionados in Chocolatier and its two sequels, the latest being Chocolatier: Decadence By Design.

What's going on here? What could possibly be the strategy behind going after such nontraditional thematic niches?

"It's all about finding the sweet spot within the target audience," says Michael Thornton Wyman, CEO of Tucson, AZ-based developer Big Splash Games.

Previously, Wyman believes he and his partners found the "sweet spot" with Chocolatier, and hopes a brand new game scheduled to be released "soon" -- Love Ahoy! -- will appeal to the rapidly growing number of vacation cruisers.

"When we came out with Chocolatier in 2007," Wyman recalls, "it seemed to us that chocolate was experiencing an explosive interest -- not just among our target gaming audience but among people who care about food in general.

"In our new game, we're coupling what we perceive to be a huge interest in vacation cruising along with a romantic angle and the allure of traveling to exotic ports that we think will appeal to our 25 to 55-year-old female audience."

Gamers will take on the role of the cruise director whose job it will be to discover the hidden interests of passengers and then match them up to create romance. In this Love Boat-like scenario, success is measured by how good you are at hooking up couples.

Similarly, Raph Koster says he applied some of what he learned from building his Facebook "island farming" sim -- Island Life -- when he created My Vineyard. Koster is founder and president of San Diego-based Metaplace.

"Both titles are still farming games -- we're not trying to reinvent social games altogether," he explains. "But we did try pushing some boundaries with My Vineyard -- after all, our company motto is 'Next-Generation Social Games' -- trying to see what kind of complexity people would accept in this space, changing up the mechanics, adding a bit of narrative, and so on."

Metaplace's goal was to focus on the entire experience of making wine, so instead of the game being all about just farming the grapes, Koster says they added steps like stomping on the grapes, choosing what sort of materials to barrel them in, and blending the different varieties.

"In order to appeal to wine lovers, we paid attention to the actual process of wine-making rather than sticking slavishly to the established farming model," he says. "And because it's a social game, players can get together for wine-tasting parties and there's a fairly significant level of user creativity in that the vineyards can be decorated and built out."

Koster likens the process of creating games like My Vineyard to what he says occurred years ago in the triple-A game market when developers pushed proven mechanics into new themes and expanded genres.

"Once you had your first perfect first-person-shooter mechanic, it became apparent that you could apply it to different time periods in history, to science fiction themes, to fantasy themes, and so on," he explains. "That's the same thing that's going on here. If you compare farming to first-person shooters, you can now take farming and add social elements and decorating elements and multi-player elements. A bit of genre hybridization is going on and the games are getting a bit broader as that happens."

The goal, he says, is to produce games that are richer, nicer-looking, and targeted at verticals that are as yet unexplored. Which, he says, was exactly the reason for creating a game about wine -- "that's an area where there are users who may not have played that sort of a game before but may be interested in doing so because it lines up perfectly with one of their hobbies."

Koster admits that his Metaplace team still considers itself to be learning the ropes on the social game space but is optimistic that they are on the right path. "We've only been in social games for about four or five months now," he says.

But not every developer subscribes to the "narrow is better" philosophy. When Chapel Hill, NC-based developer Merscom was creating casual games, it was for a very targeted audience, says co-founder Lloyd Melnick. However, prior to his company being acquired by Mountain View, CA-based developer Playdom in April, the decision was made to go in a different direction and create social games for a much wider audience. 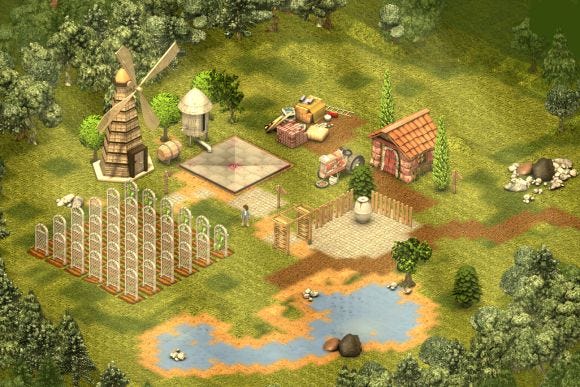 "It was a very scary time for us," admits Melnick, who is now general manager of Playdom's international operations. "We were leaving a business where we were extremely profitable -- making 'branded' casual games for not only the Lifetime Channel but for NBC Universal, National Geographic, Sea World, and Purina.

"We could have continued in that space forever, but we saw social gaming taking off and, to be perfectly frank, we saw a lot more opportunities for our company to be acquired if we moved to social. So we put a full stop on casual games in October and stepped entirely into social which was brand new to us."

While Merscom had built its casual games for the generally accepted 35-to-55 female demographics, Melnick says that social games are "much more mass market. There [were] 80 million people playing FarmVille, for example, which means it clearly doesn't have the same segmentation that exists in the casual space. It's much more like prime TV time; there are as many people playing FarmVille as watched the American Idol finale.

"You can't go after audiences like that by going after very targeted niches. Your audience is much more massive and your demographic -- which differs with each game -- will be much broader than with casual or even in the core space where everything is made for 16-25-year-old guys."

Melnick is finding social game development to be far more complex than creating casual games when his team built a game, tested it, published it, and they moved on to the next project.

"Creating the social game is just a small element of the process," he says. "You also need to create the viral hooks so that people send it to their friends and, just as importantly, their friends accept it. Not only do you want them to have a great game experience but you need to optimize it so that they'll want to spend more and more money on it.

"We've read multiple books about mass-market merchandising since what you're doing is, in effect, creating a store, which means you need the same skills as a Nordstrom or a Bloomingdale's. In fact, Playdom has a merchandising expert who comes from Abercrombie & Fitch."

He likens social games to MMOs -- they require the development team to remain onboard and constantly provide additional content to incentivize players to keep returning and reaching for their credit cards.

"You've got to create that persistence which takes quite a bit of investment in time and manpower," says Melnick. "That's why Playdom has over 400 people now and it's one of the reasons why the company is so acquisitive."

Indeed, CEO John Pleasants has been quoted as saying that one of the reasons Playdom bought Merscom was that it intends to use its "16 years of third-party branded game experience" and apply it to the social gaming space.

"We believe that brands matter and that, over time, as the social gaming industry matures, games which incorporate content from popular culture and widely respected brands will garner larger market share than those without it."

Last month, Playdom announced an agreement with ESPN to release a FarmVille-like game called "ESPNUville" as well as other branded sports games for several social networks, including Facebook, MySpace, Bebo, Tagged, and Hi5.

But while Playdom is applying mass-market merchandising theory to its games and Metaplace is appealing to niche audiences, Big Splash Games' Wyman advises developers to be more concerned with "finding that sweet spot that will raise your game above all the noise."

The casual game marketplace is so crowded that, he suggests, developers need to come up with a theme that will grab peoples' attention and convince them to take out their credit card and use it.

"When we came up with the concept for Chocolatier, he recalls, "we were looking for that hook that would enchant a large segment of the audience and prompt them to at least give us a try. There has been kind of an explosive interest in chocolate recently, not just among a small segment of the population but among people who care about food in general.

"People are passionate about chocolate. Yes, there are wine connoisseurs out there -- but I think a game about chocolate has a much broader appeal. If you're going after a segment of the gaming population, it needs to be a broad segment."

While FarmVille is currently the most popular application on Facebook, Wyman foresees what he calls "a whole new opening up of social game themes that go way beyond farming."

"I'm not even going to try to predict what they might be," he says. "But there are incredible opportunities for developers in social games. So far, I don't think many are particularly compelling, at least not the ones I've experienced. I mean, farms are interesting, but I don't know that's the theme that will prove to be the most near and dear to gamers' hearts."