Sympathy for the day job: Why one indie dev will never go full time

We often hear about indie developers who walk away from their desk job to devote all of their attention to their dream project.

But we rarely hear about the game makers who treat their day jobs as a necessary or even desirable part of their process, even though it's the more common experience. John Kane is one developer who continues to prioritize his day job, and he's happy to explain why.

Kane, also known as Gritfish, recently released his first Steam title, Killing Time at Lightspeed. Described as a “science-fiction social media simulator,” the game is about whizzing through space at the speed of light, with only a fictional social media site Friendpage to link you to your old life. Your high speed travel effects the passage of time, Interstellar-style, and as you refresh Friendpage, years pass by. You will witness the ups and downs that happen to your friends in moments. Your only option is to react--you will have no agency in their lives.

This rather unique concept was developed over the course of a month-long game jam, with Kane putting in three to four hours a day on the jam while continuing at his day job as a web developer. 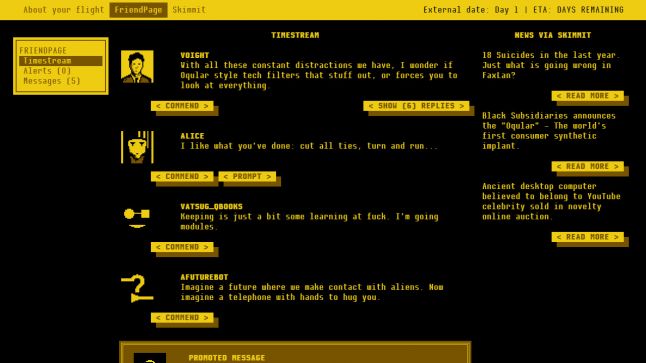 Killing Time at Lightspeed has garnered some great buzz, but at the time of interviewing it had only made back approximately 65 percent of its relatively modest costs (which include art, Steam, and publisher fees). While Kane does say the response to the game is enough to justify a sequel, he won’t be quitting his day job yet. Killing Time is something I really wanted to make, but I it's a really niche game. It was never going to be a million dollar success story, and I knew that from the start.”

“There's definitely been a few late nights to get things ready for conventions," he says. "But if things came down to it, I've always cut features or delayed rather than try and maintain crunch, because that'll start affecting my ability to do my job. Crunching is just something I'm not in a position to do.”

“I love my career as a web developer, and I'm fairly successful at it,” he says. “Barring any kind of runaway Flappy Bird-style success, I'll always be able to earn more money by making websites than by making games. That doesn't stop me from wanting to make games.”

“The challenges all come down to time management," he adds. "I played very few games this last year. I won't pretend I balanced things perfectly. I certainly exercised less than I'd like, and went out less than I'd like. I have put on a bit of weight over the last year.”

There was a temptation to take time to focus just on his own projects, but between the obvious risks of losing reliable income, as well as the difficulty of finding an audience for a game, he chose to continue his day job. “You have to do a lot of shouting before someone will hear you," he explains. "You have to shout even louder to be heard all the way from Australia. I've seen games that had the entire Aussie industry singing their praise fail to find their footing overseas."

His next release seems like it could have a wider appeal. "Mallow Drops, which I'm working on now, has been voted the best-designed game in Australia and I still don't feel comfortable gambling six months salary on it," he says. I’d rather plan to go into full-time development after having a financial success than quit my job to chase one.”

“It came down to a choice -- I could stop work and go full-time on games, but that would mean doing everything myself to save money. It would mean making the type of games that made money, which limits the risks you can take. It would mean a six-month gamble. It would have meant moving back in with my parents, or to somewhere far outside the city in order to make my savings last.”

“On the other hand, I could work full time and focus on the parts of game making I enjoy the most, collaborate with people (and pay them fairly!) to get the best work on all the parts I don't enjoy as much. It would mean taking things at a comfortable pace."

To Kane's mind, the choice to maintain employment while he works on the game is easy. "If it came out, and failed, I'd be fine. I'd still have a job and a home.”

He says he's learned as much in the last year as I've learned in the last five. "Working full-time and making games with talented people just felt like the best way forward for me," he says. "After Mallow Drops, I'll work designing smaller, more focused games like Killing Time. I'll never be able to make an 80-hour epic working this way, but that's not the kind of game I want to make right now.”