Survey: 31% of VR/AR devs are working on a platform exclusive

31 percent of the 600+ VR/AR professionals surveyed in this year's VR/AR Innovation Report say they're working on platform-exclusive projects. You can learn more in the full (free) report!
Alex Wawro
Blogger
June 26, 2017

If you're working in VR or thinking about making the jump, this report offers you some useful perspective on the rapidly-expanding, diverse and hard-to-measure VR/AR/MR industry - from sustainability of the market, to practical challenges, platform popularity, funding and more!

This year's report comes in advance of the next highly anticipated standalone VRDC event, VRDC Fall 2017, which will take place in San Francisco from September 21-22, 2017 and will bring together creators of immersive experiences of all kinds—including games, entertainment, brand experience, healthcare, training, design, and more.

As an example of what you'll get in the full report, today we'd like to highlight a particularly notable finding regarding how many developers are working on platform-exclusive VR or AR projects.

The answer, according to our results, is about a third -- roughly 31 percent of survey respondents said their next project would be released exclusively on a single VR/AR/MR platform.

That’s up 10 percent from last year, when we asked the same question and got a “Yes” from just 21 percent of respondents. This suggests rising interest in developing an experience for one platform first, perhaps because that’s where they see their greatest chance of success -- or simply because they intend to port their work to other platforms at a later date.

When we followed up with devs who answered in the affirmative to find out which platform, exactly, their next project would be exclusively released on, the most popular response proved to be HTC’s Vive headset. 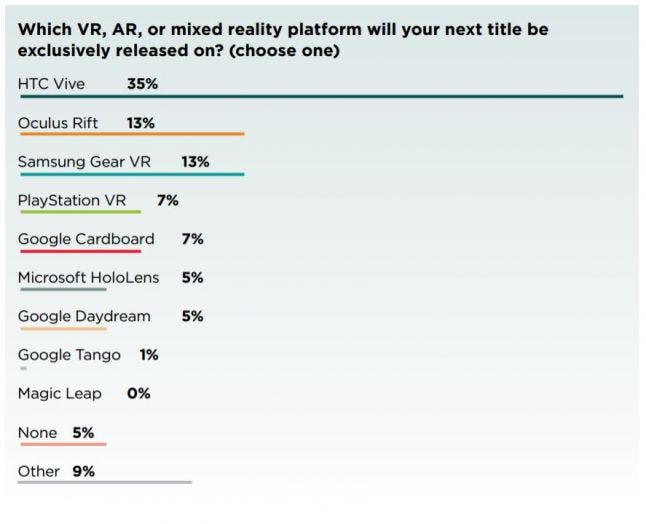 More details about what VR/AR devs are up to, including which headsets they're developing for and where their funding is coming from, is freely available within the full report.