Over the course of the last 12 years of running his studio, Schell Games, Jesse Schell has learned a few things about management: Here's a collection of his insight, shared today at GDC.
Christian Nutt
Blogger
March 06, 2015

Over the course of the last 12 years of running his studio, Schell Games, Jesse Schell has learned a few things about management.

"I don't come from the place where I had some super amazing management education or anything," Schell said today at GDC. In fact, it's more like this: "People are not excited about management all the time, but they're excited about making great games. But the management has to get done."

After careful and thorough consideration, he determined that the way information travels through the studio is what gets in the way of effectiveness.

"You can see everybody working and you can see their emails but what you can't see are their relationships, but the relationships are invisible and define everything at the company," Schell said.

In his observation, there are three kinds of information: Facts, opinions, and emotions.

"Emotions are more facts than opinions, but they are very personal facts," he noted.

There are also three significant topics: Projects, processes, and people. 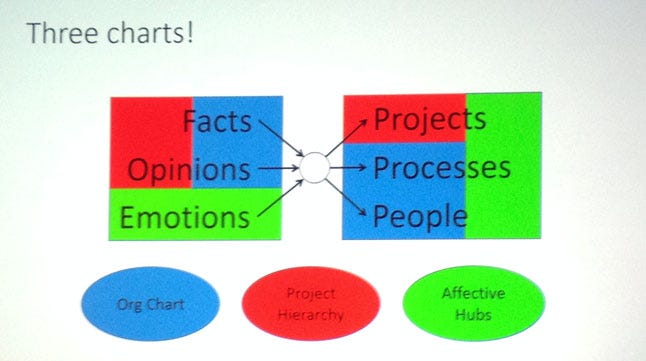 The color coding shows which factor affects which aspect.
"Affective hubs" are people who facilitate comminication.

The important thing is to ensure that the information flows between people -- and, he says, there are a number of tactics you can take to ensure this.

Schell Games uses Matrix Management, a common process in which teams have leads, but disciplines also have leads: That way, someone has a direct boss on the project but also an over-arching boss who they can go to with concerns about their career development. To unblock communication, anyone can go to whichever superior they wish. "If you've got a problem with one of them you can go to the other," said Schell.

Plus, each project has both a producer and a director. The producer is in charge of getting the project done on time; the director holds the creative vision. "It's good, it's like having two parents," said Schell. "They're in charge of different things." For "longer-term issues," staff can speak to the head of their discipline.

"The reason Matrix Management seems to be a good idea, is because it allows two different channels of information."

Schell pointed out the favorite example of Pixar's office: There's a big atrium in the middle, bathrooms and meeting rooms are centralized, and people congregate there -- forcing a lot of random interactions.

Schell doesn't have the size of staff or resources of Pixar, but he's done his best to create an open environment, and he shared a photo. 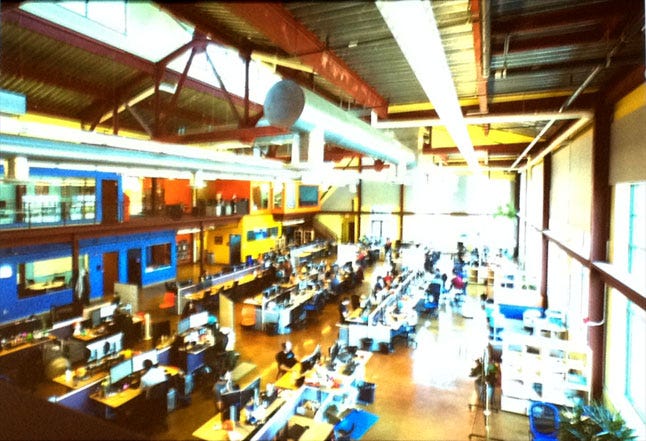 "Any time there is a project we move people around," he noted. And it's not just important to put people on the same project in close proximity; they also need to be in the correct formation. Even a small wall, or the need to walk a short distance, can block communication.

People who sit "back-to-back are working on projects together," he said. The desks that face each other, in contrast, are different projects because that's actually a barrier to communciation: "It's much different than, 'Can you walk around and come see this?'"

Like many studios, Schell uses Agile. "Agile is really just a system of coordinating and organizing information flow," he said, "So you can continue optimizing the project."

Another ritual at Schell games is a week-long game jam every year.

"Let's have people work on projects they are excited about," he said. "People have ideas for things they would like to do, and it's blocked because it's not part of their reguilar daily project." It is also an important signal from management: "We're making time. It's important to us."

Schell told the story of another company that had "coffee time" where employees gathered when a fresh pot of coffee was ready; when the company installed a Kuerig machine, coffee time ended and communication slowed. The ritual was destroyed.

"Food is super important to us as humans," Schell also noted. Rather than regularly catering, Schell Games only does it sparingly: "you want people to get together and go out of the studio, and you want them to bond up in social situations," Schell said. "The hunting party is an old, fundamental notion ... When you give out free food at a studio, you're often blocking really useful information flow." 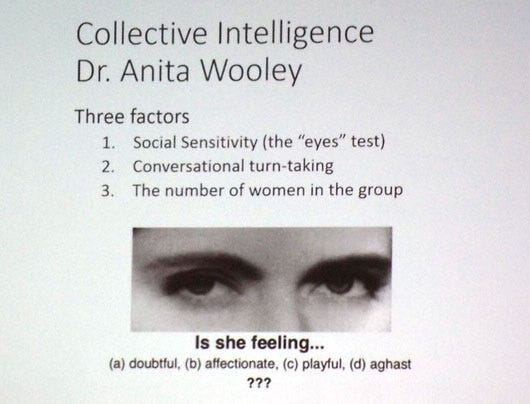 Schell pointed to the research of Dr. Anita Woolley, who has studied group intelligence. She's determined several factors that govern the intelligence of groups.

The first is social sensitivity: It's a skill that some are good at and some are bad at, but a group can compensate for members that aren't as skilled here.

The second is that "groups that interrupted each other a lot behaved really stupidly," and those that listened to each other did much better.

Finally, groups that include a mixture of men and women do better. "It's that everyone behaves a little differently," Schell said. Even all-female groups don't do as well as mixed groups -- the mix is the important thing. Group dynamics change for the better, in other words, when you have a mix of genders.

Noise blocks information flow: Literal (ambient) noise, but also the noise we all have going on in our heads (self-doubt, distractions). Interruptions and lies also count as "noise" to Schell.

And publishers create noise in the form of meddling. It's highly incentivized by the realities of the publisher/developer relationship, as this chart illustrates: 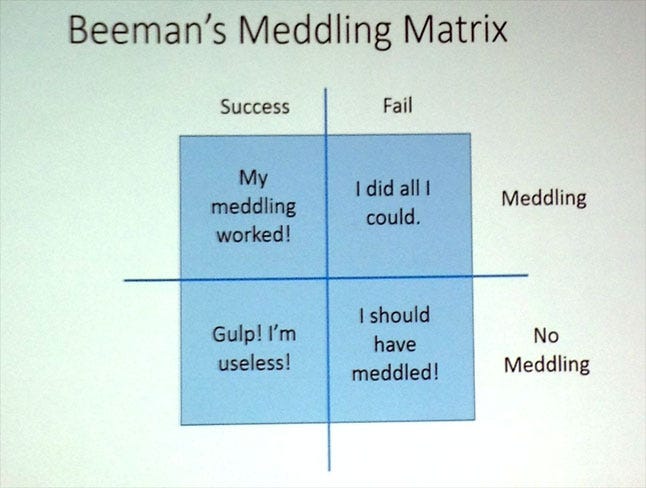 "It makes it super important to design the information flow so that they know what they need -- so they feel they are doing the best they can to make it excellent," Schell said.

With the lovable fool, on the other hand, "all this blocked up emotional information flows through them," and since "everybody loves them," he said, people help them out -- and they learn. "They often get better and better and better, and they move up." Now they're competent!