Valve has tweakedÂ how the user review system works on Steam in an effort to combat review bombing, which has been an area of concern for some developers for quite some time.Â
Game Developer
Staff
March 15, 2019

Valve has tweaked how the user review system works on Steam in an effort to combat review bombing, which has been an area of concern for some developers for quite some time.

While it's not currently clear how effective Valve will be in identifying off-topic reviews (or whether it will help in solving the issue), this is good news for developers who may have been worried about their own titles.

Review bombing has been a serious issue for devs, with Devotion being the latest game to be hit. Valve had previously made changes to its user review system back in 2017 to tackle spamming.

As explained in a blog post, Steam will try to minimize the number of “off-topic review bombs” on the user score displayed at the top of a game’s store page by letting users opt-in through their account preferences to see all reviews counted.

How does Valve identify off-topic reviews? By using a tool they built, the goal is to "identify any anomalous review activity on all games on Steam in as close to real-time as possible," and then notify "a team of people at Valve, who'll then go and investigate."

"Once our team has identified that the anomalous activity is an off-topic review bomb, we'll mark the time period it encompasses and notify the developer. The reviews within that time period will then be removed from the Review Score calculation."

But Steam users can still choose to have off-topic review bombs included in all the Review Scores they see, it just needs to be enabled with checkbox under their Steam Store options. 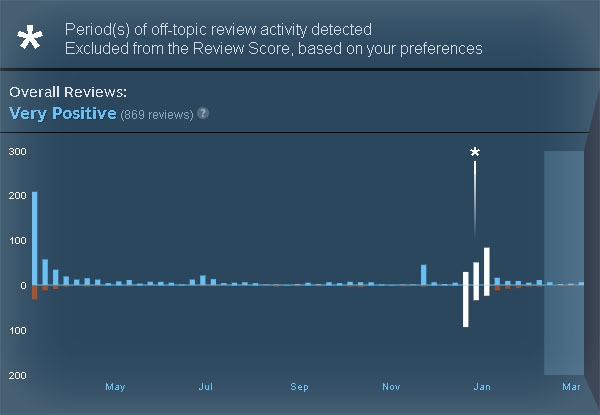 According to the post, the “off-topic” criteria refers to reviews “where the focus of those reviews is on a topic that we consider unrelated to the likelihood that future purchasers will be happy if they buy the game.”

Complaints about DRM and EULA changes are considered off-topic under this rule, with Valve defending its reasoning that "the ‘general’ Steam player doesn’t care as much about them, so the Review Score is more accurate if it doesn’t contain them."