Steam's latest game festival takes a break from the seasonal branding, and brings over 500 game demos to Steam for a limited time.
Alissa McAloon
Editor-in-Chief
June 16, 2021

Next Fest, Steam's latest stab at an online demo event, is officially live on Steam with 500+ game demos now playable for the entirety of the week-long event, which runs June 16 to June 22.

Over 500 demos make for a lot of different games competing for player attention, but Next Fest looks to address those knee-jerk discoverability concerns by offering a bevy of tools designed to help players quickly gravitate toward games that align with their interests.

Right away, mousing over any game listing on either the home page or genre-specific pages pops up a short trailer to very quickly inform players of the game's look and feel. That quick preview offers a short list of the game's tags alongside its name, release date, and a button to download the demo.

The event's homepage meanwhile offers several different ways to sift through the 500+ games included in the Next Fest lineup outside of the usual standard genre descriptions. 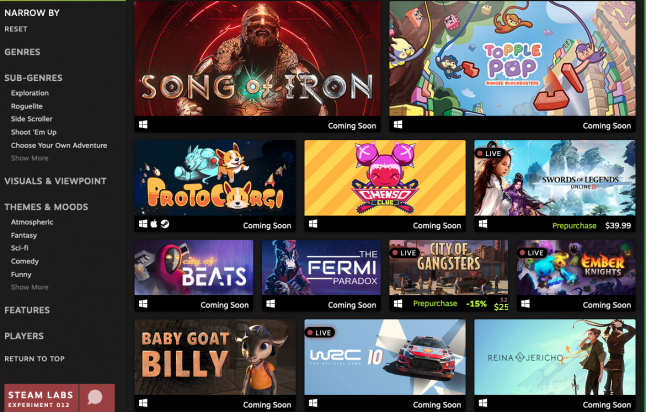 On a higher level, players are able to sort by traditional genres like Action, Adventure, Strategy, RPG, and others to narrow down Next Fest's offerings a smidge right off the bat. Each genre page offers its own sub-category listing that, in the case of the Adventure tab, sorts each demo of that category into more specific pockets like Open World, FPS, and Arcade, to again name only some of the subcategories included.

Throughout the week-long event, the Steam team has also worked with the developers behind many of the games featured in the Next Fest lineup to organize live streams that aim to help devs reach new players, and open a dialogue between dev teams and the players checking out their demos in real-time.

Developers interested in checking out the live event can see what other game makers are bringing to the table here.

Steam, meanwhile, has made a habit out of regular game showcase events like this since in-person game expos went on hiatus during the pandemic. Those interested in participating next time around should keep their eyes on Steamworks in the meantime. The next Next Fest is currently scheduled for October 2021 and Steam will likely have news on the participation requirements in the coming months.