Steam has set a new record for concurrent players, with the platform playing host to over 14 million users around 20 hours ago.
Chris Kerr
News Editor
January 09, 2017

Steam has set a new record for concurrent players, with the platform playing host to exactly 14,370,167 million users around 20 hours ago.

The new figure surpasses the previously reported record of 12.3 million, which was registered on January 4, 2016.

Although this isn't the first time that record has been broken, it's the first significant increase since last January, and the first instance of the platform registering over 14 million concurrent users.

Back then, the most played games were DOTA 2, Counter-Strike: Global Offensive (CS:GO), and GTA V, and a quick glance at the official Steam stats page shows little has changed in 12 months.

Those titles are still dominating the most played charts, although as the image below shows, DOTA 2 and CS:GO are someway ahead of Rockstar's open world shooter. 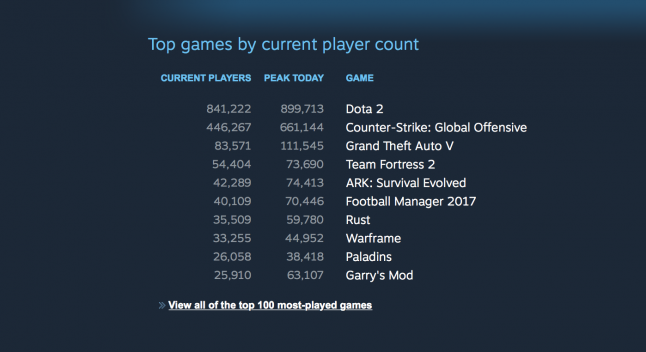