Valve has launched a new (but experimental) feature for Steam that builds a layer of interactivity onto the storefront’s existing recommendation system.
Alissa McAloon
Editor-in-Chief
July 11, 2019

Valve has launched a new (but experimental!) feature for Steam that builds a layer of machine learning-powered interactivity into the storefront’s recommendation system.

The Interactive Recommender takes a peek at Steam users’ play history and uses machine learning to curate a list of recommended titles that they’re likely to be interested in. While that’s similar in theory to Valve's previous recommendation algorithms, the Interactive Recommender, as the name would suggest, lets Steam users tweak the parameters of the results on the fly and see their game recommendations adjust in real time.

The new feature itself looks at previous play history and patterns to churn out a list of recommendations right away, but Steam users have the option to apply filters based on tags, display only new or old releases, and weigh recommended titles according to how popular or niche Steam considers them.

The tool is mostly geared towards players, but Valve notes the experimental feature will likely benefit developers as well. For one, introducing recommendation changes as an interactive, optional tool gives Valve access to better usage data without any of the frustrating shifts that game developers might remember from previous sudden changes to Steam's recommendation algorithm.

Valve also notes that, by design, the machine learning-driven tool doesn't require any optimization for developers since everything is driven by player behavior, rather than manually assigned tags or incoming reviews.

"While it's important to supply users with useful information about your game on its store page, you shouldn't agonize about whether tags or other metadata will affect how a recommendations model sees your game," explains Valve.

Ideally, the company says that the recommender will help developers in the long-run too, and devs can see data on Interactive Recommender-driven traffic on a game's existing Traffic Breakdown page. 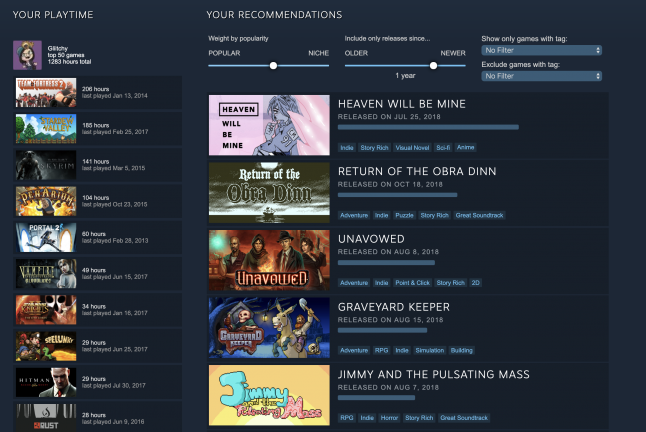 Valve describes it as "a neural network informed by the Steam Community of players" and says that, while other recommendation methods make educated guesses to suggest games similar to what a player has already played, the machine learning-driven Interactive Recommender takes a different approach.

"It disregards most of the usual data about a game, like genre or price point. Instead, it looks at what games you play and what games other people play, then makes informed suggestions based on the decisions of other people playing games on Steam," says Valve. "The idea is that if players with broadly similar play habits to you also tend to play another game you haven't tried yet, then that game is likely to be a good recommendation for you."

The new feature is already up in Valve’s new experimental section, giving developers and players a like a chance to see the tool’s recommendations in action. The feature is one of a handful of experimental tools announced today as part of Valve's Steam Labs initiative.