How Alphabear braved the dark waters of the free-to-play ocean with irresistible viral sharing and a sensible business model -- and made it through the journey 1 million downloads strong.
Kris Graft
Publisher
August 04, 2015

Spry Fox’s latest mobile game Alphabear skillfully blends challenging word puzzles with an array of adorable bears in silly costumes. Each bear functions as a sort of power-up that grants special bonuses, and players can deploy them in future word puzzles.

This latest effort from the developers who created the beloved (and widely imitated) hit Triple Town (who also co-created Realm of the Mad God) is earning raves from critics. More importantly, Spry Fox may have cracked the ultimate puzzle -- how to break into a very crowded mobile game genre.

Alphabear has reached one million downloads, according to Spry Fox. The developers credit the game’s success to a certain word that begins with a “V” ands with an “L.”

“I think that in the modern mobile F2P market, you are essentially hosed if your game is not highly viral in some way,” says Spry Fox co-founder and CEO Dave Edery. “And even WITH a highly viral game, your odds of success are terribly luck-dependent.” 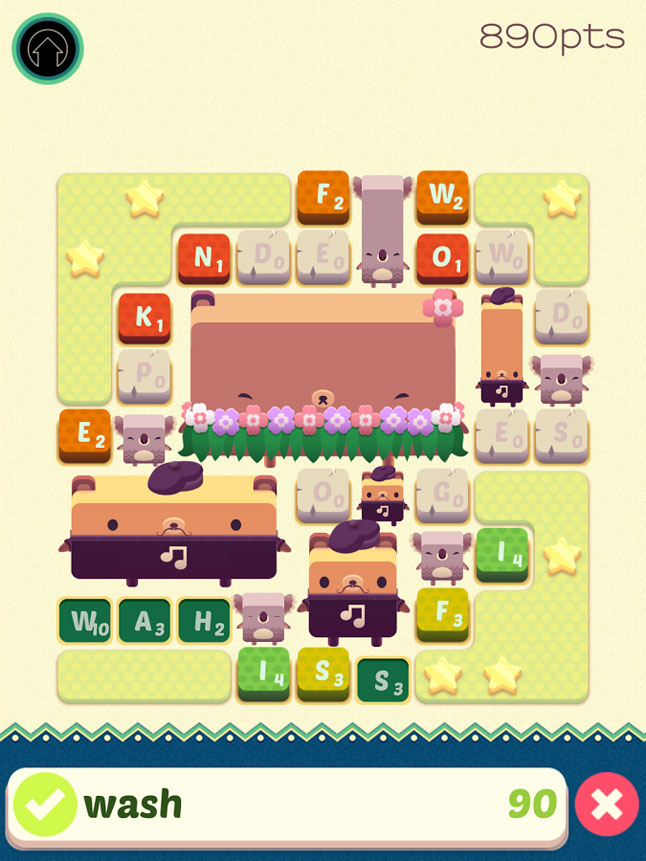 Edery says that he sees the mobile market as largely locked down, with even less movement in the top grossing charts than there was a few years ago. He's not alone in this view. “The top game developers are (wisely) trying to make their games into lifetime hobbies; they have become so good at tuning, updating and acquiring users that they have effectively walled out most other developers,” says Edery.

“That means that there's just fewer players to go around, even though the market is technically growing. Relatedly, the average mobile game development budget has risen quite a bit in the past few years as well.”

Edery says that his personal measure for whether to pursue a mobile game in the face of such stiff headwinds is to either create something that can be built and shipped in three months maximum, or create something that’s likely to be highly viral. The former wasn’t an option for Alphabear -- Spry Fox’s initial pre-launch dev budget was three to five times that of Triple Town. The team went for the latter, and it worked.

What feature does Edery credit with the breakout success of Alphabear? “The 'bear speech' at the end of every event delights players and makes them want to share with their friends,” he says. “That, I'm pretty sure, is the only reason we've already broken a million downloads, or come anywhere close, really.” 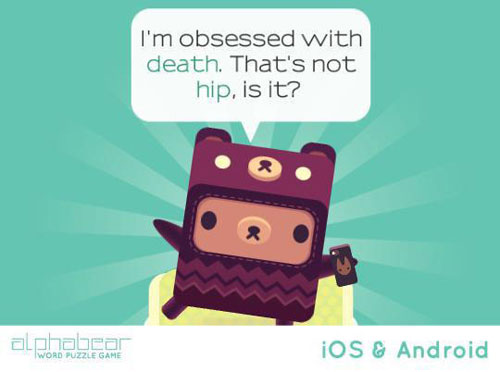 The “bear speech” is a speech balloon that appears above the head of one of the aforementioned adorable costumed bears, as seen above. It contains a sentence that incorporates several of the words that the players themselves came up with in the last round.

So for instance, a bear wearing a dog costume might say, “So COY. Always REDACT. Much BOAT. Wow!”

Or a bear wearing a panda costume might say “MUMPS: It’s what’s for dinner!”

Or a bear wearing a top hat might say “Y U NO STANK, DINGHY?!”

Or a bear that for some reason is wearing a bear costume might say, “Don’t mess with my ITCHY PIANIST if you don’t want to be IMBUED.”

There's a button that allows players to share their bear speech on social media or send it to friends. They're often funnier than those examples -- thanks, in part, to a a button that allows them to re-roll, and make their bears produce an alternate speech balloon if the original doesn’t seem sufficiently hilarious or otherworldly.

The longer and more sophisticated the words you spell are, the more delightfully absurd the bear speech is. (And as some have noted, sharing bear speech also serves as a nicely oblique way to brag to your friends about your ability to devise long and sophisticated words in Alphabear.) 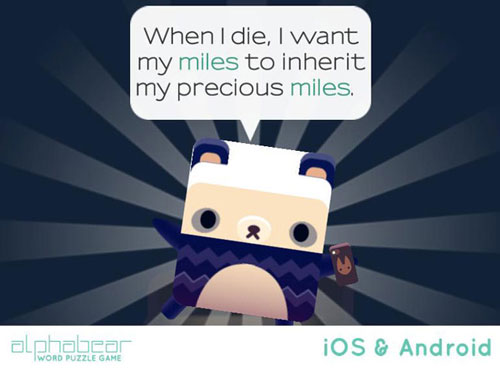 Despite bear speech’s role in guaranteeing the viral victory of Alphabear, the origin story of this feature is shrouded in mystery. The identity of the person at Spry Fox who actually had the eureka moment is lost to history. “No one on the team can remember who first came up with it,” says Edery. “Someone suggested it and we stuck it into a card in Trello, and then we ignored it for months.”

Once the devs took it up, they found that it was deceptively difficult to actually implement this feature in a satisfying way. “It was many weeks of effort between the engineering, the art, and editing the dictionaries and coming up with templates that worked even 5 percent of the time,” he says. “Some people look at it and say, ‘Oh, it's just Mad Libs.’ But templates that work even when the person filling them out is doing so completely randomly... that’s easier said than done.”

Bearing the challenges of free-to-play

The fact that players themselves are spreading the word about Alphabear helps free up Spry Fox to tackle an even thornier issue: How to incorporate free-to-play elements in a way that doesn’t alienate anyone. ”People are much more comfortable with F2P than they were a few years ago, though they've also come to expect certain common F2P conventions and become confused or upset when you don't follow those,” says Edery.

“For example, if you use an energy system, players expect it to work the way it generally does in other games; we tried a few experiments in this area and they fell completely flat. Once we switched to a more conventional energy system, the complaints mostly evaporated. It seems your best option today is ‘no energy system’ or ‘an energy system like everybody else's.” 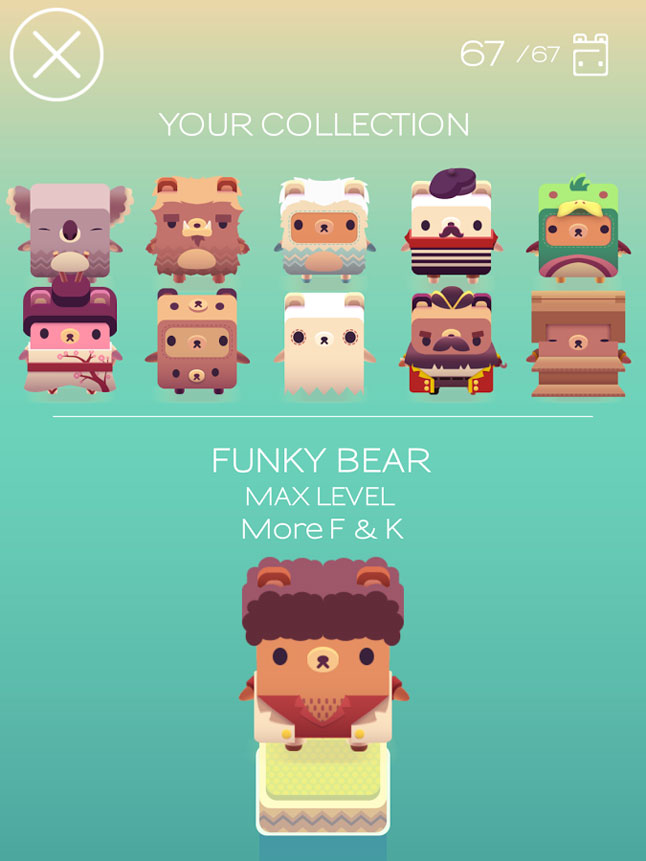 Alphabear allows players to purchase purchase honey and bypass cooldown time for their bears to grant them access to the next puzzle for a one-time payment of $4.99. That’s less than Spry Fox initially sought with its first big mobile game. “Back when we released Triple Town, nobody who had an energy system in their game offered unlimited energy for a flat fee,” he says. “We were one of the first to do that, if not THE first. We charged $7 for it, which as far as we were concerned was ‘buying the game.’ Casual games cost $20 to buy not TOO long ago... so it seemed fair to us.”

He says that many players were outraged because they were used to buying mobile casual games for 99¢ or $1.99. “We were being compared to that price point, not to other free-to-play games that didn't even offer the option, and not PC casual games of yore. So we dropped to $3.99 in Triple Town, and most of the complaints disappeared.”

But Edery insists that bending but not completely capitulating on Triple Town’s pricing helped reset player demands. “Today, thanks in part to Triple Town, I think, selling unlimited energy for a flat fee of greater than $1.99 is no longer seen as crazy town,” he says. “We've gotten relatively few complaints even though unlimited energy in Alphabear is actually a dollar more than it is in Triple Town. We've had multiple developer friends tell us that we priced it too low.”

The lessons of Spry Fox’s F2P experiences might be that going with the flow of what players are used to would seem to have its benefits, but occasionally risking disgruntlement in order to shift expectations may also pay off in the long run.

Or as an Alphabear might put it, “So expectations. Always experimentation. Much phrenology. Wow!”