Spectators and players need the same thing from your game design

Adam Saltsman and Rami Ismail take a break from their latest games to ruminate on the surprising and positive similarities of developing a game that streams well and a game that plays well.
Phill Cameron
Blogger
October 20, 2015

Sometimes, we hear about a conversation between two game developers that sounds so interesting that we wish we could have been privy to it. So we ask the devs to share the insights from that conversation with us.

Case in point--a recent tweet by Adam "Adam Atomic" Saltsman, the creator of Canabalt who's now working on a new game, Overland:

Saltsman had told Rami Ismail of Vlambeer that he had been spending a lot of time thinking about how the pressures of developing a game that will be accessible and interesting to a live, streaming audience are the same pressures that push you into making a better game in general.

That sounded counterintuitive. Streaming games on sites like Twitch is now a major part of the game landscape, and a great way to boost your game's visibility. But it can also represent a potential pitfall for independent development, as making sure that your game is streamer-friendly spreads the developer even thinner as they worry about marketing, community engagement, bug fixing and the actual creation of the game.

But Saltsman was suggesting that time spent making a game more inviting and accessible for streamers might in fact make for a better overall game experience.

Ismail has a lot of experience developing for a live audience with Vlambeer's Nuclear Throne, a game that has been both developed and played out in public for over two years now. Streaming has been an integral part of that game since the beginning, and something that has directly shaped the development.

Both developers say the pressures to please the player and a livestreaming audience aren't necessarily antagonistic. They can be complementary.

"The underlying theory, for me, is the idea that people watching a stream and people playing a game for the first time have a lot of the same needs," says Saltsman. "The most obvious thing here is a need for clarity and comprehension; the ability to tell what is even happening. What's the situation? Is the player in danger? Are they performing well? What's going to happen next? What just happened?'" 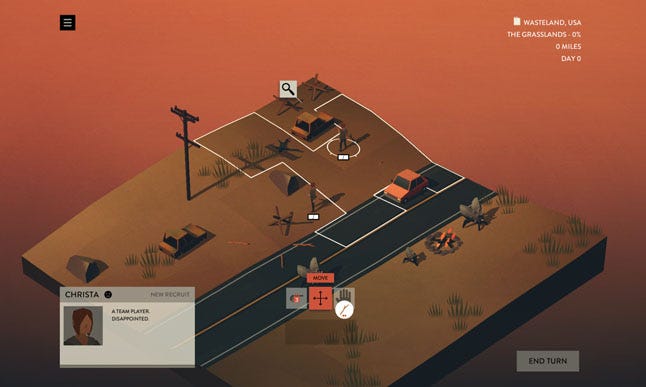 "The most obvious thing here is a need for clarity and comprehension; the ability to tell what is even happening"

Ismail agrees. "I think in the past few years, especially with the rise of local multiplayer games and livestreaming, we've seen a new specialization in game design - designing for spectatorship. Where traditionally, the focus has been on the player and their interaction with the game, nowadays a designer also has to focus on how people that are watching along interpret the game. It requires critical information to be accessible always, not just the first time it's introduced, it requires clear and communicative UI - sometimes it even requires pacing modifications to allow people to take in information better."

"Games in established genres, especially genres with arcade roots, or games from companies with a real focus on UX already do a great job of this a lot of the time." observes Saltsman. "If you look at Street Fighter, a game that was designed to be easily noticed in an arcade setting, and then designed to be grokkable by a crowd around the cabinet, you can see all the affordances that enable this: big obvious health bars, big obvious super meter, big obvious level timer, obvious spatial metaphor for whether one player is cornered and pressing their advantage or not. You can read the whole game state and a lot of the past and future of the game in a single screenshot. You need a bit of game grammar to do this, but not a lot.'

"And I think the big EVO tournament each summer shows that Street Fighter is a game that streams really well, and the game's huge audience and complete lack of in-game tutorials are all good indicators that generally in-game clarity/comprehension for that franchise is quite good. The growing playerbase for competitive fighting games over the last few years is a testament to streams, but also to the game state being so easy to read." 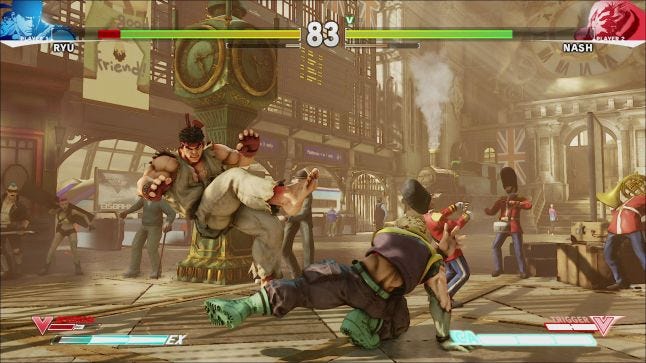 "An illustrative counter-example is that the procedural game to end all procedural games, Dwarf Fortress, has maybe 0.01% of the streaming audience of something like Minecraft, which despite some obfuscated crafting has an almost obsessively 1:1 clarity and presentation of the world + inventory. Minecraft screenshots present a lot of past/present/future gamestate at a glance (features pioneered by Zach Barth's Infiniminer, in all fairness). Again, good for streaming, but also good for new players. Dwarf Fortress screenshots only show you a small slice of the world, and none of what you're seeing makes sense to 99.9% of humans.'

"These things probably seem obvious in retrospect but that's because they're big existing examples." Saltsman explains. "The problems get way way weirder when you're doing what you might call experimental game design or forward game design, where you're making up a new game or new game rules or sometimes even a new genre. There aren't 20 years of examples to rely on, and suddenly you have to kind of ... cross-remember or independently figure out how to reintroduce this kind of... legibility, is what we've been calling it on Overland, I think I owe that term to Patrick Curry. Legibility."

"It sounds trivial--just show all the most important stuff. But when you're when you're exploring new territory, not even the game designer knows what's important."

"The thing about legibility is if you have 20 years to think about the problem, it's trivial in some ways. Just show all the most important stuff. But when you're making a new game, when you're exploring new territory, for a lot of the development not even the game designer knows what's important. This is such a weird idea but I know this is the case for a lot of designers, including myself. How can you possibly design a legible game when you don't even know what is important?'

"This is the crux of the problem, and the place where I think the pressures of streaming dynamics are actually good for a lot of games. I think in general legible games stream better, and if you're thinking about the marketing future of your commercial game project, you're probably thinking about streaming. You're probably going on Steamspy and reading tea leaves and trying to match up graph spikes to big YouTube broadcasts of indie games that are somehow tangentially related to your own project etc. I think the notion that streaming matters is pretty well accepted by now."

The audience as a player

"When a player directly interacts with a game, they have already created a mental model of their intent, and their movement correlates with that intent." Ismail explains. "They don't need additional communication from the game. But how do you communicate that intent -- something that the game can't infer from the player -- to people watching? How do you minimize the amount of explaining streamers have to do, and instead make the game communicate to their spectators in such a way that they can talk about their choices, their intent and the results?' 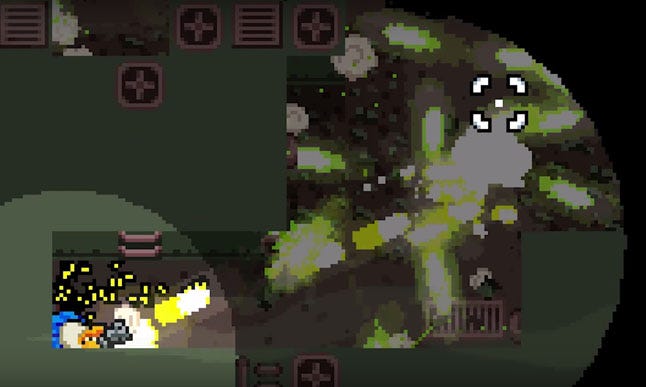 "In Nuclear Throne, we have a mutation screen where players can pick one of four randomly selected mutations to empower their character with new abilities." Ismail continues. "It's a screen that comes up five to ten times in a twenty-minute playthrough, and is central to the choice elements in the game. Originally, when the game first reached Early Access, streamers would stare at the screen, ponder their options, hover their mouse over the mutations as to read their descriptions, and weigh their choices together audiences. It was a nice moment for streamers to talk with their spectators amidst a game that's generally too high-intensity to talk beyond the occasional swearing and cursing. But as the game continued to grow, and the streamers got better at the game, the time they spent on the mutation screen decreased and decreased until they would spend only the amount of frames needed to identify the four images, move the mouse to the best one, and click.'

"Spectators suddenly lost their inherent ability to learn about mutations, or even what their names were to look them up on the Nuclear Throne wiki. We decided to combat that by showing the name of the mutations for a few seconds after selecting them, sometimes even for a second during gameplay. It ended up not only fixing our issue, allowing people a bit more time to talk mutations, but it also fixed the issue of people forgetting what mutation they picked because it is such an automated thing for people that have developed preferences."

While this change wasn't made to directly benefit the player, foregrounding information proved to be of benefit to the,. This recalls Saltsman's ideas of legibility; that keeping information in the open and clearly discernable is a benefit to both player and audience. Saltsman tells me how this has influenced the development of his new game, Overland. 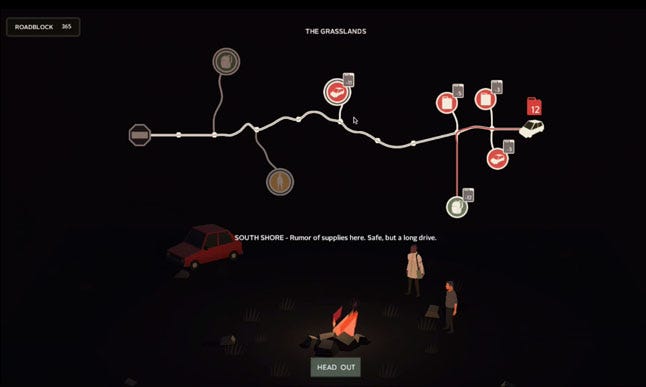 The en-route screen from Saltsman's Overland

"Regardless of your opinions of streaming, and what it means for games with fixed/spoiler content, etc, I think there's a bit of a silver lining in this added pressure for legibility in your game. It's been a huge influence on Overland - we've been putting a huge amount of effort into making as much of the past/present/future of the gamestate really obvious and visible in a single screenshot. You can always see how many creatures there are, how many people there are, what condition they're in, what inventory they have, etc. Each screenshot is supposed to be able to tell a story even if you don't know anything about strategy games or ... stats, or whatever.'

"Some of the initial motivation for this was to make something that would be amenable to streaming." Saltsman continues. "[It's] one of the main ways of marketing games now, but we also just want to make legible games because it means they're easier to learn how to play and easier to understand, even if the gameplay itself is deep and challenging. Easy to learn, difficult to master, etc. These are things that we've valued for a long time, at least in our commercial work, and I think it's neat that it dovetails so neatly with legibility as a strength/design concern."

Ismail shares a similar sentiment. "The biggest overlap you'll find in traditional game design thinking is tutorial design or local multiplayer design, but for games made with Twitch audiences in mind, you'll have to create a continuous tutorial, one that is always running, drop-in and drop-out. That just happens to make a game more accessible, easier to pick up in the future, and generally more pleasant to play."