That's according to new documents and comments from Epic chief exec Tim Sweeney that have surfaced during the ongoing Epic vs Apple trial (via The Verge), which reveal how Epic initially worked to persuade the PlayStation maker to support cross-play back in 2018.

As was widely reported at the time, Sony initially shunned cross-platform play before eventually relenting (starting with the Fortnite beta), and now we know a bit more about how that back-and-forth between two of the industry's biggest players went down.

One email penned by Epic Games' vice president of business development, Joe Kreiner, shows how Epic offered Sony a number of unique incentives to support cross-play. They included bumper E3 branding, unique PS Plus characters in Fortnite designed to "drive PS Plus adoption even more," an extension of the Sony company-wide Unreal Engine 4 license that would preserve "some of the best terms we've ever offered for UE4," and an announcement that makes "Sony look like heroes."

"Let's make this a huge win for us all. Epic's not changing its mind on the issue, so lets just agree on it now," wrote Kreiner. "We love working with PlayStation, and we want this to be a win/win. The longer this drags out, it will be less so. I can't think of a scenario where Epic doesn't get what we want -- that possibly went out of the door when Fortnite because the biggest game on PlayStation."

Sony, however, wasn't convinced. The company's senior director of developer relations pushed back against Epic, and said "cross-play is not a slam dunk no matter the size of the title. As you know, many companies are exploring this idea and not a single one can explain how cross-console play improves the PlayStation business."

Clearly, Sony eventually did find a way to make cross-play work in its favor, and another document along with comments from Epic chief exec Tim Sweeney show precisely how. As the slide below shows, the Japanese company decided to introduce "cross-platform revenue share" that would offset the reduction in revenue lost through cross-play. 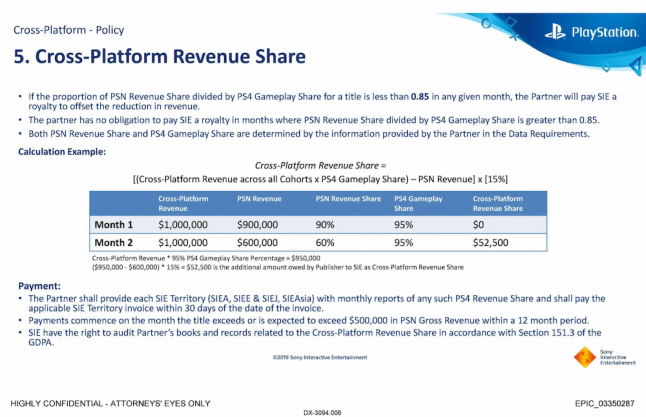 "If the proportion of PSN Revenue Share divided by PS4 Gameplay Share for a title is less than 0.85 in any given month, the Partner will pay SIE a royalty to offset the reduction in revenue," reads the internal document.

As explained by Sweeney at the trial, that charge is essentially a form of cross-play compensation. "In certain circumstances Epic will have to pay additional revenue to Sony," he commented, confirming that Epic had agreed to pay the additional fees when required. "If somebody were primarily playing on PlayStation, but paying on iPhone then this might trigger compensation."

Sony also insisted that companies offering cross-play support include a way for players to disable all cross-platform interactions and prevented virtual currency being transferred to and from PlayStation platforms.

It's unclear if this policy is still in use or how many other companies were affected by it. You can see the full set of documents over on The Verge.