Sony has unveiled a new video series called State of Play that will keep fans in the loop with "updates and announcements from the world of PlayStation."
Chris Kerr
News Editor
March 22, 2019

Sony has unveiled a new video series called State of Play that will keep fans in the loop with "updates and announcements from the world of PlayStation."

The first episode will air on March 25 across Twitch, YouTube, Twitter, and Facebook, and will showcase a variety of upcoming PS4 and PS VR titles with new trailers, new game announcements, and new gameplay footage.

If you're thinking the format sounds awfully like a Nintendo Direct or Inside Xbox presentation, that's because it is, and it's a development that means all three main players in the console space are now content to drip-feed fairly major announcements and news all year round.

It perhaps also explains why Sony won't be present at E3 2019, with the company last year revealing it was pulling out of the annual trade show to search for "inventive opportunities to engage the community."

Microsoft, however, will still be in attendance, and Nintendo will continue its recent tradition of hosting a flagship Nintendo Direct stream as opposed to a full-scale press conference.

With regards to future State of Play episodes, Sony hasn't announced any concrete dates, but promised the show will return throughout the year. 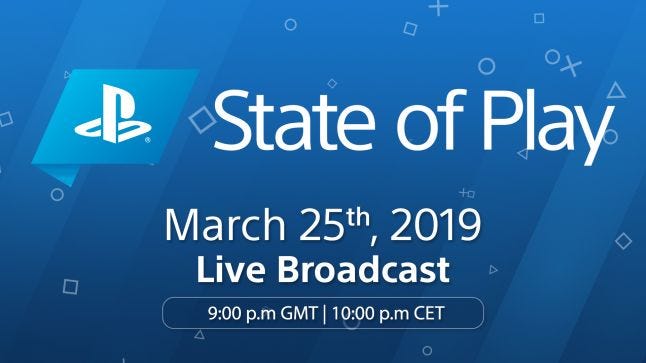