Sony has unveiled what sort of tech will be powering the PlayStation 5 in a 'deep dive' reveal hosted by system architect Mark Cerny.
Chris Kerr
News Editor
March 18, 2020

Sony has unveiled what sort of tech will be powering the PlayStation 5. In an extensive 'deep dive' reveal hosted by system architect Mark Cerny, the company revealed the next-gen console will pack an eight-core 3.5GHz AMD Zen 2 CPU, a custom AMD RDNA 2 GPU that features 36 units at 2.23GHz, and a custom 825GB SSD.

During the hour-long stream, Cerny was particularly keen to talk up the development possibilities presented by the SSD, calling the solid state drive the "key to the next generation." For instance, he explained the super-quick SSD will allow the PS5 to load 2GB of data in around one quarter of a second, which is roughly 100 times faster than the PS4's hard drive.

"It'd means the game boots in a second. There are no load screens. The game just fades down while loading a half dozen gigabytes, and then fades back up again. The same for your reload: you're immediately back in the action after you die. While fast travel becomes so fast it's blink-and-you-miss it." 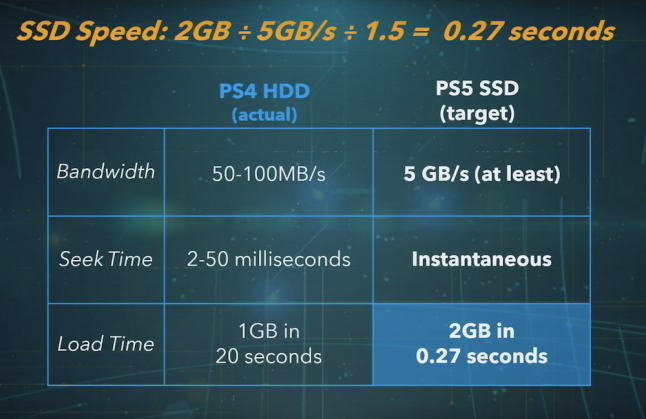 Notably, owners will be able to expand the amount of storage using an NVMe SSD Slot, which will support non-propriety expansions, although there will be some caveats when choosing an expansion. External USB hard drives will also be supported, so don't toss them out just yet.

For Cerny, the other game-changing addition is the console's new Tempest 3D audio engine, which promises to deliver "unprecedented 3D audio fidelity." Again, Cerny talked at length about the improvements made here, and said the system has been built to deliver rich audio with presence and locality.

"The first goal was to create audio for everyone -- not just VR users, or soundbar users, or headphone users. That means audio had to be part of the console. The second goal was to support hundreds of sound sources. We didn't want developers to have to pick and choose what sounds would get 3D effects and which wouldn't. We wanted every sound in the game to have dimensionality," added Cerny.

"Finally, we wanted to really take on the challenges of presence and locality. When we say presence, we mean the felling that you're actually there -- you've entered the matrix. It's not something we thought we could perfectly achieve, but the ideal is that if we stopped using just a rain sound, and inserted used lots of 3D audio sources for raindrops hitting the ground at lots of locations around you, at some point your brain would take a leap and you'd begin to have this feeling -- this feeling of real presence in the game." 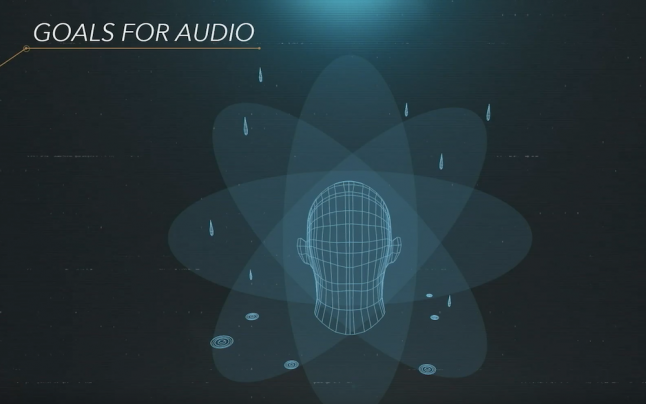 Backwards compatibility was also touted, with Cerny explaining the PS5 will be capable of running PS4 titles "at boosted frequencies," and said that he expects almost all PlayStation 4 titles to be available at launch.

While those are some the biggest talking points, there are plenty more in the full video reveal at the top of the article. For anyone who just wants to peruse some raw tech specs, you can find those below courtesy of Eurogamer. 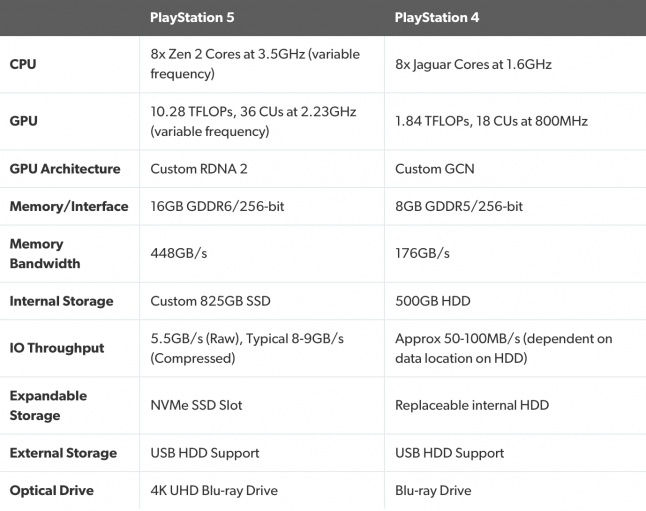