At GDC, Corey Davis, design director of Psyonix, talked about the many factors that went into making Rocket League the biggest surprise hit of 2015.
Game Developer
Staff
March 25, 2016

Corey Davis, design director of Psyonix, began his GDC talk about the making of the massively successful game Rocket League by showing a clip of the game in action.

But...the footage looked a little off. The frantic sportscar-soccer gameplay was there, but the frame rate and the detail looked wrong.

"That's not a clip from our Nintendo 64 port of Rocket League, that's our other game," Davis quipped.

"It was basically the same game as Rocket League," says Davis. "It was our first independent game, and we weren’t sure what went wrong."

The topic of his talk--which many consider to be a highlight of the conference--was how Psyonix's slightly reworked version of Supersonic Acrobatic Rocket-Powered Battle-Cars became one of the biggest breakout hits of 2015 through a mix of smart design decisions, perfect timing, extreme budget limitations, and luck.

Davis freely concedes that Supersonic Acrobatic Rocket-Powered Battle-Cars is "the worst game name of all time." But that was just one of the reasons he identifies for why the initial iteration of the sportscar-soccer concept only found a small audience of dedicated players. There was no marketing. There was no time to polish. The frenetic gameplay looked choppy at 30 fps. And PS3's online play was not as robust as what the developers had experienced when they LAN tested it on their PCs.

The 2008 game did not sell well or review well, but there were signs that it had the germ of something terrific. "The people who got it loved it," he says. "It had a very sticky effect. There were endless community montages and vid clips--we supported Youtube exports way back in 2008." 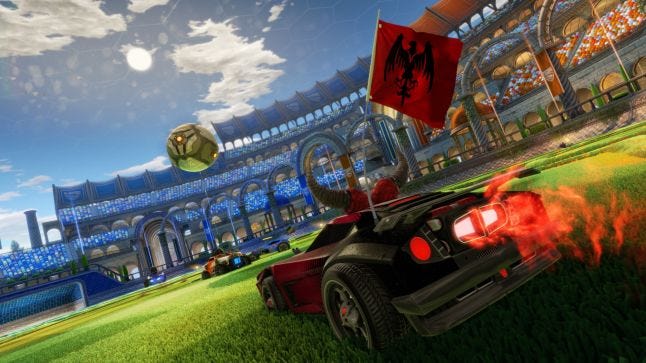 While they worked on new iterations, Psyonix paid the bills with contract work on games like Mass Effect 3, Bulletstorm, and Xcom: Enemy Unknown. At first, they aimed for a grittier take on car-soccer, like an automotive version of Monday Night Combat. Davis says that the concept was edging towards what would become eSports, but they never hit on a fun playtestable build.

"We spent--no, wasted--a lot of time concepting and experimenting with scale," says Davis. "We struggled to move away from perception of these being little RC cars."

They also experimented with expanding their car-soccer concept into an open world game. "If you wanted to drive to a stadium and play soccer, you can," he says. "But the physics that make soccer fun aren’t great for other activities, and it was insanely out of scope." Davis says that this was one of many times that budget limitations saved Psyonix from making sweeping changes to the formula that seem obtuse in retrospect. 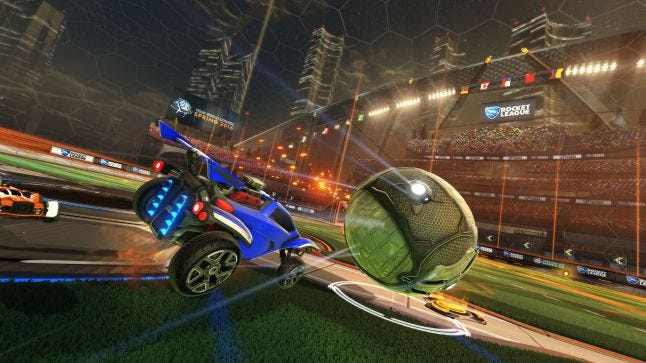 Eventually, they narrowed focus back to car soccer and settled on what became Rocket League. What were the key changes that made it a massive success where Supersonic Acrobatic Rocket-Powered Battle-Cars had failed? According to Davis, it was because of:

Davis stresses that minor overlooked mechanics and features can have huge effects on the popularity of a game. For instance, Psyonix's decision to end Rocket League matches not at the buzzer, but when the ball finally hit the ground after the buzzer, led to amazing moments of "zero second magic."

Ultimately, Davis is reluctant to credit the game's smashing success to a series of conscious, well-considered decisions by Psyonix. "We think hits are replicable, when it's probably down to timing and luck," he says. "Random luck can look like genius in retrospect. But I will say that we maximized our odds."