SEARCH
A minimum of 3 characters are required to be typed in the search bar in order to perform a search.
Business
7 min read
News

Shipping your first game while you're still in school: A Story About My Uncle

These Swedish game design students founded a company and cut a deal with Coffee Stain Studios to publish their first game, Story About My Uncle, to positive buzz a week before graduation.
Alex Wawro
Contributor
June 03, 2014
Some developers cringe at the prospect of shipping a first-person platformer. Sebastian Zethraeus co-founded a company to make it happen. “It’s been a really fun challenge to take on, because everybody who hears ‘first-person platforming’ gets a frowny face,” says Zethraeus. Back in 2012 he was part of a group of game design students at Sweden’s Sodertorns University who were tasked with building a non-violent first-person game in the Unreal Engine. They had less than three months to do it, and zero experience with the Unreal Development Kit. The rough prototype they built, a puzzle-platformer called A Story About My Uncle, wound up winning a Game of the Year nomination at the student-focused Swedish Game Awards that year. The team published their prototype online as a free game and left it there for over a year while they took a break to focus on their education. Now some of those students have gone on to form their own studio, Gone North Games, and cut a deal with Goat Simulator developer-cum-publisher Coffee Stain Studios to polish and release that prototype as a full game while they’re still in school. A Story About My Uncle has been on sale for less than a week, but it's already garnered a remarkable number of positive Steam recommendations based on its high-flying movement and vibrant art design. "In ten weeks we actually learned the entire engine and made a prototype,” says Zethraeus, who now serves as a designer and project manager at Gone North Games. “We were proud of it at the time, but our eyes bleed now when we look at it.”

Taking a leap and latching onto what works

A Story About My Uncle outfits players with a preposterously useful plasma grappling beam and challenges them to traverse sprawling fields of rocky islands floating above an endless, deadly abyss. The cartoonish copper-and-cobalt aesthetic was inspired by Disney’s animated sci-fi adventure films Atlantis: The Last Empire

and Treasure Planet, but the act of leaping and swinging from rock to rock evokes muscle memories of games like Portal 2 and Quantum Conundrum. Gone North’s debut title can’t quite match the technical complexity of those games, despite the best intentions of its creators. “We had some initial ideas that were basically playing with gravity in the world -- you would turn it upside down, and stuff like that -- and then we realized this was basically impossible to do, with our knowledge of this engine,” says Sebastian Eriksson, a fellow designer who serves as CEO of Gone North. “But one of our programmers had been playing around with a mechanic to proper yourself within this gravity-bending game which we noticed was simply fun to play with. So that ended up being the main mechanic, and we took it forward and built a game around that.”

"When we noticed that players could ‘cheat’ our levels we kept it that way, because it’s a fun and interesting way to see how people utilize your game."

“It’s been a real headache that’s made us scratch our heads for hours,” says Zethraeus. “I wouldn’t recommend doing anything like it, basically.” Both Sebastians recommend that developers in similar situations err on the side of too much player freedom when designing a first-person platformer. “We know the player can bypass our level design very easily, so when we noticed that players could ‘cheat’ our levels we kept it that way, because it’s a fun and interesting way to see how people utilize your game,” says Eriksson. “We stopped trying to constrain the players so much, and that’s why there are some amazing ways to speedrun our levels.” In addition to their own inexperience, the progenitors of Gone North had to find a creative way to circumvent the limits of their own education. “We’re actually the first class this program has had,” says Zethraeus. “We’re like the testing course…” “The guinea pigs!” interjects Eriksson, with a laugh. “We’re the guinea pig class,” continues Zethraeus.”The teachers knew there was going to be problems creating this education, too; it’s a difficult subject, making games.” Difficult enough, in fact, that the students who worked on A Story About My Uncle often had to teach themselves how to use game development software because their teachers didn’t have much practical experience in the game industry. Both Sebastians seem sanguine about this shortcoming. “I think that the lack of some of that education made us have to adapt and learn from other ways -- from forums, books, and the Internet, basically,” says Zethraeus. “Just try stuff out, fail hard, and be very open-minded about how we make games.” “Yeah, it’s not the right education if you want to end up working at DICE, because then you have to be really, really good at one specific thing,” says Eriksson. “In this education, everyone has to become like generalists basically -- we know a little bit about everything, and that’s really good if you’re a small team.” 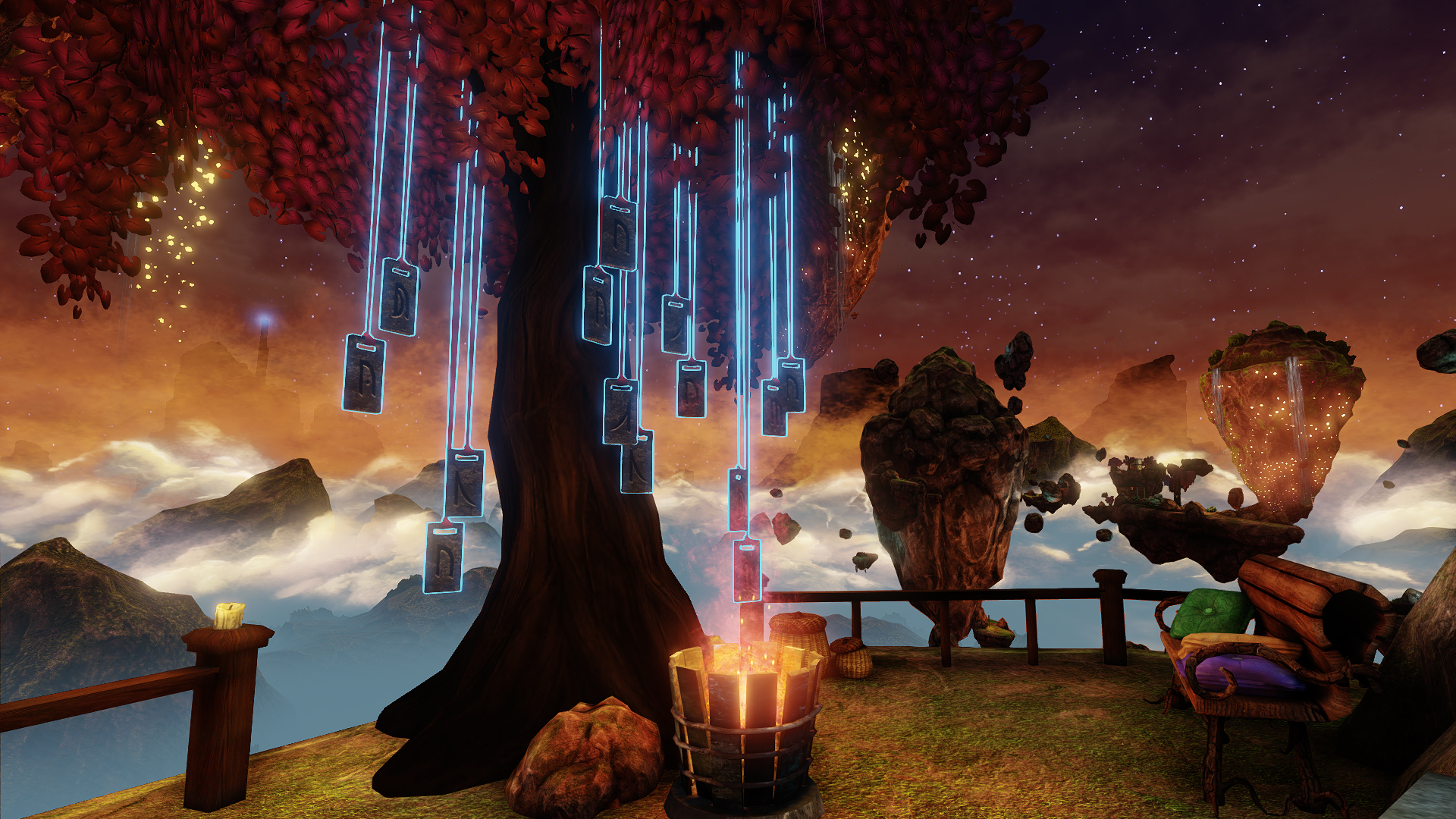 Specifically, 9-10 people -- small, but still big enough that when the students were assigned to work in UDK, they could afford to devote at least one person to every major aspect of the engine, from level design to the Kismet visual scripting system. By cramming that small team into an even smaller room -- Eriksson claims all nine Gone North employees and one intern work out of an office built for two -- Gone North has effectively developed its debut game by committee, with a little help from Goat Simulator developer Coffee Stain Studios.

Working with your publisher for college credit

“Somehow I ended up in a Skype call with [Coffee Stain Studios’ Oscar Jilsen],” says Zethraeus. “And I said ‘hey, we’re thinking about maybe doing this game that might need a publisher,’ and he said ‘well, we’re thinking about maybe being a publisher.” So the developers of A Story About My Uncle went back to their entrepreneurship class and worked up a fictitious pitch to Coffee Stain Studios as part of their coursework, then turned around and made the pitch for real. Coffee Stain agreed, making this the first game the studio will take publisher credit for. “I think that they saw a bit of themselves in us, because a few years prior they had gone through basically the same thing,” says Eriksson, who points out that Coffee Stain Studios is also a Swedish studio founded by students whose debut game, Sanctum, won acclaim at the 2010 Swedish Game Awards. To hear the Sebastians tell it, the folks at Coffee Stain have helped them get A Story About My Uncle listed on digital distribution platforms like Steam and Gog.com, offered feedback on the game’s design and answered technical questions about Unreal Engine 3 itself, but have otherwise kept their hands off the game’s development. The work of polishing that 2012 prototype into a 2014 release -- including remaking

"We’re doing our internship for our publisher, but we're also making one of the games they're publishing."

everything from the meshes to the voice acting to the code itself -- has been done by Gone North’s student developers, many of whom are actually completing a university-mandated internship with Coffee Stain Studios in the process. “We’re doing our internship for our publisher,” says Zethraeus. “But we’re also making one of the games they’re publishing.” “Yeah, we’re not done yet,” says Eriksson, with a laugh. “We get our bachelor’s next week, actually.” They’ll graduate with game design degrees the week after they’ve shipped their first game. To the best of my knowledge, A Story About My Uncle is the only prototype from that 2012 class that has ever made it to market. Both Sebastians concur; when asked about inspired them to stick with the project and put the work in to release it digitally, Eriksson suggests that both the Game of the Year award nomination and the feedback from players drove them to finish the game, found a company and hash out a publishing deal.. “Seeing the joy in people’s eyes when they played it, that cheered us on to make it bigger and better,” says Eriksson. “It made us want to get back to it, and make it a proper game.”
ConsoleProductionDesign
Get daily news, dev blogs, and stories from Game Developer straight to your inbox
Subscribe