Developers should note that while Sega is laying some of the blame on weak sales of the pachinko and pachislot machines which make up its primary income source, the lion's share of the cutback in expected profits fell on its video game business (e.g. the Entertainment Contents division, encompassing everything from Total War: Warhammer to mobile F2P earner Chain Chronicle.)

Sega slashed the full-year operating income expectations for its video game division down to 2 billion yen (~$16.2 million USD) from 11.5 billion yen (~$93.3 million USD), noting that "competition in the Japanese market is intensifying" around digital game software and that Sega's lineup this fiscal year includes games that were delayed (like Persona 5) or failed to meet sales expectations.

These cutbacks come after a hard year for Sega, which shuttered offices and laid off hundreds of staff multiple times in an effort to staunch its losses and focus on mobile and digitally-distributed games through its Sega Networks division.

To that end the firm opened its wallet to acquire multiple mobile studios throughout the year, and has most recently made a multi-million dollar investment in F2P mobile game publisher GoGame. 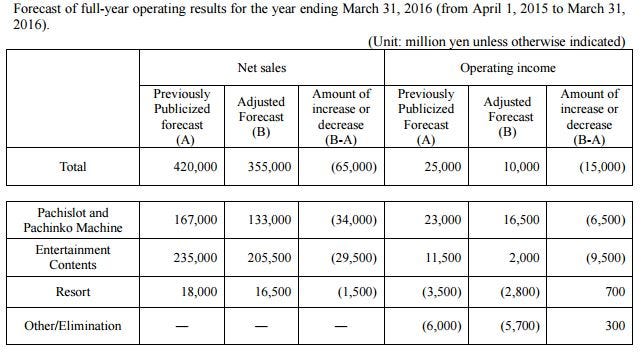