Sales up by 5.4 percent in Sony's games division

Earlier this morning Sony released its financials for the three months ended June 30, and both sales and profits are up across the board.
Chris Kerr
News Editor
August 01, 2017

Sony has released its financials for the three months ended June 30, and both sales and profits are up across the board.

Within the Game & Network Services division, which houses Sony's video game operations, sales increased by 5.4 percent to 348.1 billion yen ($3.15 billion) thanks to a rise in physical and digital PlayStation 4 software sales.

PlayStation VR also did its bit to boost sales, with Sony having shifted over 1 million units since the device launched last October.

Despite that surge in sales, operating income in the division fell by 59.7 percent to 17.7 billion yen ($160.6 million). Sony says that drop off can be blamed on the lack of a highly profitable first-party release during the first quarter.

Last year, of course, the company was bolstered by the release of Uncharted 4, which went on to sell roughly 9 million copies worldwide.

Still, that dip hasn't tempered company expectations. In fact, the console maker has upwardly revised its full year forecast, and now expects to see sales and operating income reach 1.98 trillion yen ($17.9 billion) and 180 billion yen ($1.63 billion) by the end of this fiscal year.

The firm also believes its on track to sell 18 million PS4 consoles by the year's end, having already sold 3.3 million units during the first quarter. 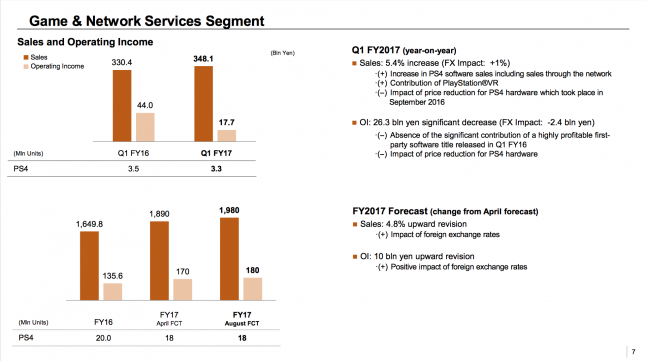