Rovio is suing a restaurant in California for allegedly violating its Angry Birds trademark.

As spotted by GamesIndustry.biz, the Finnish studio filed the lawsuit in the Central District Court of California last week, and claims 'Angry Birdz' Nashville Hot Chicken has diluted the Angry Birds trademark and logo in its signage.

The developer apparently sent a cease and desist order to the owners of the restaurant back in February, but despite communicating with them since has been unable to resolve the issue outside of the courts.

An IP lawyer who spoke to GamesIndustry.biz claims Rovio has a strong cause because of the similarity between the fonts used in the original Angry Birds logo and the Angry Birdz sign above the chicken shop. That in conjunction with the name itself apparently shows a "wilfulness and the intent to confuse" consumers.

"The fact that they use the same font as the game is actually a huge problem for them," commented IP attorney Stephen McArthur. "Also, the fact that Angry Birds is licensed out on every product imaginable, from plush toys, to lunchboxes, to film, etc. increases the chance of consumer confusion.

"It's not entirely unlikely that, given how famous and successful the game is and how prolific its licensing is, they would have licensed their brand to a restaurant in Los Angeles."

Rovio is attempting to prevent the restaurant from using the name or logo moving forward, and is also seeking damages. You can compare the two logos for yourself using the image below. 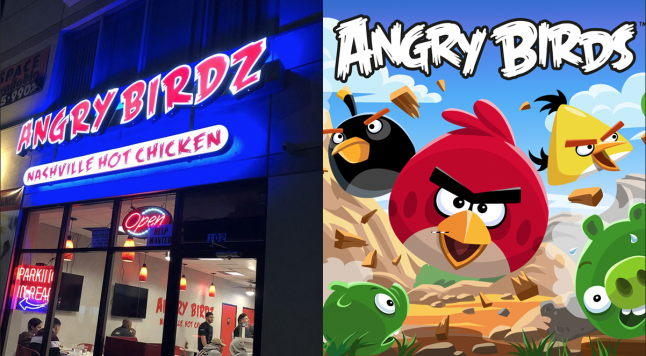