Rewarded Surveys: The Answer To An App Publisher’s Revenue Prayers?

Finding ways to monetize a mobile app is the Holy Grail of app publishers. Ad networks and mobile publishers are constantly defining new and creative ways to maximize monetization. Rewarded videos are at the forefront of the latest creative shift, designe
Andreas Vourkos
Blogger
May 23, 2016

Finding ways to monetize a mobile app is the Holy Grail of app publishers. Ad networks and mobile publishers are constantly defining new and creative ways to maximize monetization. Rewarded videos are at the forefront of the latest creative shift, designed around an in-app economy. But the new kid on the block, Rewarded surveys, might cut their reign on the app monetization kingdom short.

Rewarded videos are a great way to offer users an incentive to stay engaged in-app, while publishers are earning more ad revenue. The reward generally comes in the form of in-game currency (gold, coins, power-ups) or any form of premium content, and is distributed to the user after a successful video completion. A recent study reveals that rewarded videos are the hottest revenue generator chosen by app publishers at the moment, as well as one of the most widely accepted formats from app users.

But simply showing a video that leads to an app install campaign can get quite predictable. The point is to find a way to present to users something more interactive, with full opt-in control, thus maintaining a balance between desired ad engagement and user experience. Here is where Rewarded Surveys come into play, cutting short the reign of rewarded videos in the app monetization kingdom.

Rewarded surveys are modified short market research surveys designed for mobile, that users opt-in to participate in order to be granted premium content such as coins or credits. Users, upon successful completion of the survey, are rewarded in various ways, similarly to rewarded videos. Market research surveys are the stock in trade for gathering any sort of market information. The aim is to gather information from a small sample of a market in order to predict what the whole market wants. Rewarded surveys are a great tool for a variety of businesses, helping them understand their customer’s habits and likes & dislikes, get product feedback, measure brand awareness, gather consumer insights. Any business, be it large corporations or SMEs, needs data about their target customer, so they don’t have to rely on guesswork and gut instinct. 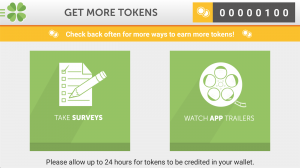 Rewarded videos can be a high converting solution for publishers, with rewarded surveys working alongside them, to add an extra revenue stream to a mobile app. The two formats can be used in sync, working hand in hand to achieve the end target, i.e. increased revenue. There is no need for the app developer to chose which one to use, giving two solutions to one problem. The end result is maximum coverage in any gaps in fill rates that may be present.

Rewarding users to complete tasks can be really beneficial for app publishers for a number of reasons: it is a great way to monetize non-payers - the vast majority of users in a mobile app; and it encourages users to stay engaged in the parent app.

A recent study by FusePowered, carried out in over 6M players in their network aimed to conclude whether or not engagement with rewarded ads has a positive or negative effect on conversion and revenue. The study indicates that any preconceptions one might have about losing IAP revenue from users stocking up on premium currency through rewarded video have no basis. In fact, six times more players made an IAP after watching a reward video than those who did not.

Sounds perfect right? But who said you cannot improve on perfection?

Rewarded surveys are climbing on the list of preferred ad formats available to users. A recently conducted survey by Pollfish was carried out on approximately 1200 mobile app users in the USA, asking them their opinion on why they prefer surveys to traditional ads, revealing several interesting answers: 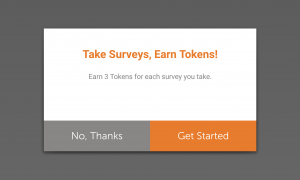 7 reasons you should switch to rewarded surveys today

Surveys are an interactive format of monetization, requiring user input. This process brings engagement and is fun after all! All users can do with rewarded videos, is watch, or “pretend to watch” until the end.

Surveys require every user’s personal and unique opinion on a number of topics, making them user-centric. Survey results, when collected, are forwarded to marketers and companies looking to gather consumer insights and improve or form future or existing products and services. Users like the idea of contributing and having their voice being heard. As stated in one of the answers:

There are times when it pays to be spontaneous. Users are not aware of the topic of the survey beforehand, nor do they get presented the same survey twice once completed! This sees high traction as users are not forced to aimlessly watch endless videos resulting to an app install prompt. Curiosity on what comes up next and what others have replied brings excitement and drives conversions and in-app engagement.

While rewarded videos have a higher payout than traditional ad formats, rewarded surveys pay even more, making them the number one choice in terms of payout both for the user and for the publisher.

Users find it way more convenient and faster to complete a survey and get a reward rather than waiting for a video to complete.

User consent and control is very important, and rewarded surveys are paving the way for users by providing a non-intrusive, opt-in control. Users are provided with a clear exit button, and they can choose when to start or stop their survey, making this a less intrusive experience. The all-important balance between desired engagement and the user’s experience is thus well protected.

It is widely accepted in the users’ community that the marketplace needs a different ad format, less annoying, more interactive and tailor-made for the user. This is where surveys come into play.

Get your timing right: Figure out the ideal time to show your survey

Rewarded surveys are getting more popular every day with enticing experiences and ever increasing ROI. Deciding to incorporate a rewarded survey is a non-brainer, but here are a few points that will warrant you a winning monetization strategy. 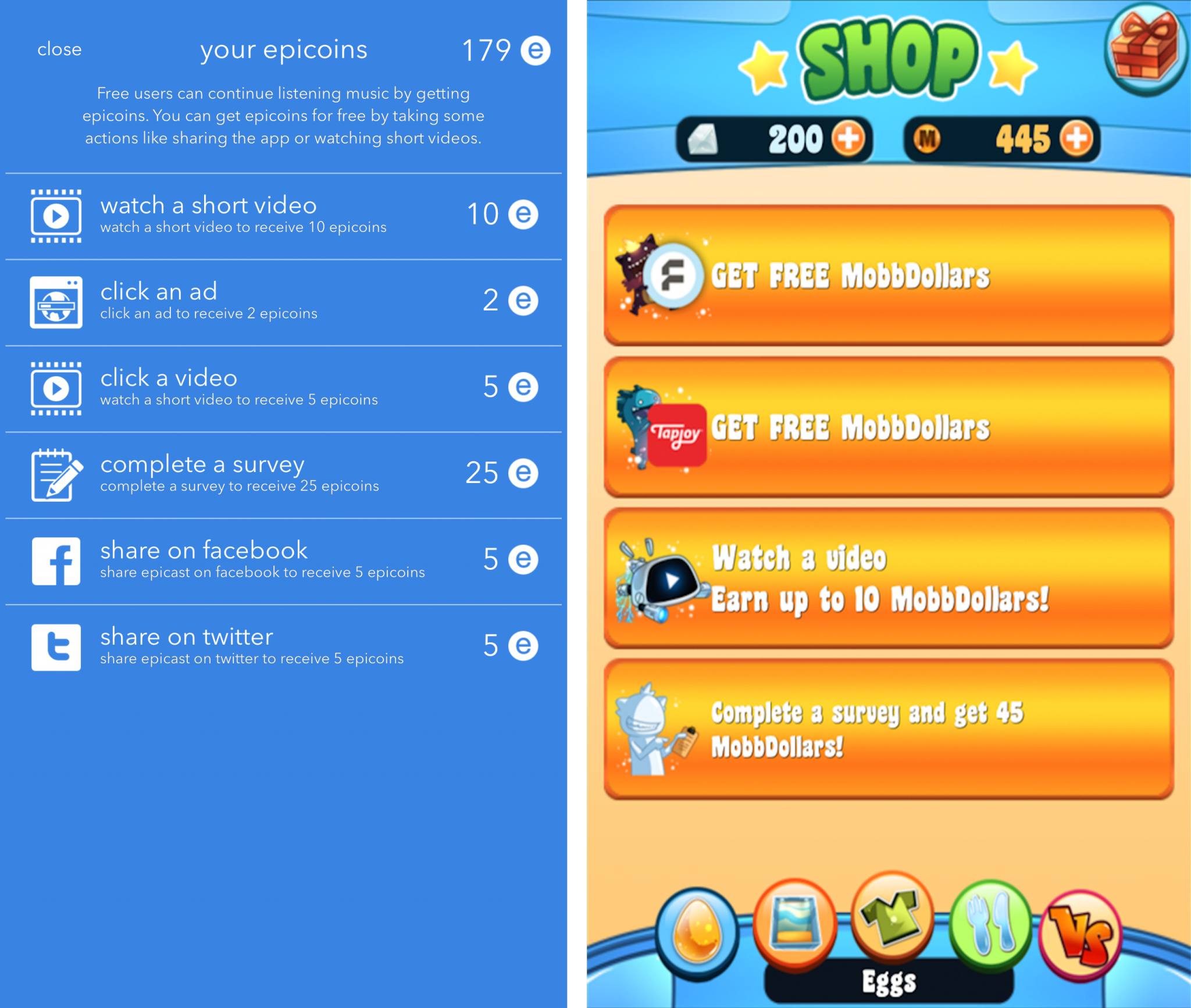 Present Perfect: Where, When and What

This is the most common approach in the marketplace. Users decide to visit the storefront to purchase power-ups, coins etc. and that is when you offer them the option of completing a survey in exchange for a reward! 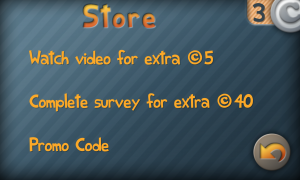 Instead of allowing the user to navigate through to the storefront section, they are shown a prompt that gives them instead the option to complete a survey and receive an initial boost or power up, prior to using the game or app. 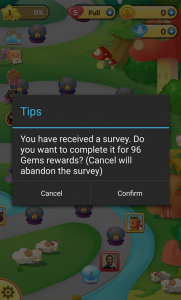 Events during gameplay, such as running out of lives before the finish line can be monetized. Rewarded surveys at level failure may help users advance in the game and keep them playing longer. Personalized rewards following completion of a reward survey, based on whatever level the user is on, will keep them engaged and nudge them towards IAPs when the rewards run out. 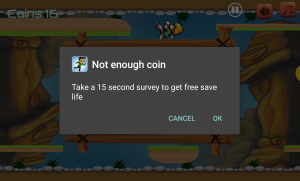 After you decide on the placement of your rewarded survey, you also need to decide what to reward the user with. Remember, it is not always about money! 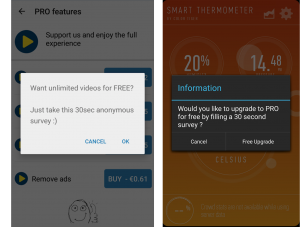 Online ads are a major segment of the advertising industry, and they are getting more intrusive every day. Ads published, cluttering gaming/app experience, are increasing every year, at a staggering rate. Often, the only thing that ads lead to is irritation. Trying to avoid this, publishers looked into monetizing this frustration either with IAP or rewarded approach. Consider being given the option to complete a short survey and be rewarded with an ad-free app environment; who wouldn’t go for it? 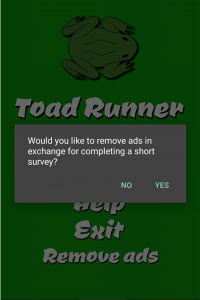 Rewarded surveys can be paired nicely with your existing monetization system, break the ice for freemium users, pay more and increase retention and conversion when used properly. And remember, users will always look for the easier, more interactive and higher payable solution in your app to keep going. This option is rewarded surveys!