Recent research by Yahoo's mobile analytics company Flurry suggests that while the average amount of time Americans spend using mobile devices every day continues to increase, average time spent playing mobile games in the U.S. has dropped significantly in the past year.

In a blog post published this week on the Flurry Tumblr, Yahoo exec Simon Khalaf claims that (based on data gathered from Flurry's analytics platform and third-party sources like comScore) the average person in the U.S. now spends 33 minutes per day playing mobile games. That's roughly a 36 percent drop from the same period last year, when Flurry pegged the average time at 52 minutes per day.

"The completely unexpected result of our analysis this year is the dramatic decline in time spent for mobile gaming," wrote Khalaf.

He goes on to posit three primary reasons for the shift: not enough exciting new mobile games, a growing preponderance of games with in-app purchases players can make to avoid spending time grinding in-game, and a broader trend of people moving away from playing games in favor of watching other people play games.

The same report claims that the average amount of time Americans spend watching entertainment on their mobile devices (including YouTube and thus, presumably, those eSports-watching millennials) has increased 240 percent in the last year, from 13 to 44 minutes per day. Overall time spent on mobile devices in the U.S. has increased as well, up 35 percent year-over-year to an average of 3 hours and 40 minutes per day. 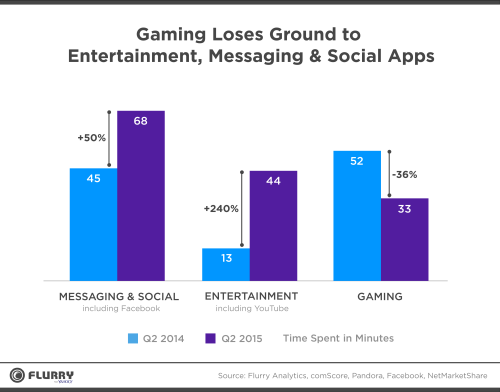