What goes into reawakening a franchise that a publishing executive admits "did fall on hard times"? EA Games label president Frank Gibeau and EALA's Greg Goodrich and Rich Farrelly discuss the revitalization of Medal of Honor.
Kris Graft
Publisher
May 04, 2010

First introduced in 1999 through a collaboration between Electronic Arts and film director Steven Spielberg, the Medal of Honor franchise stood out among the corridor shooters of the time because of its sharp presentation and focus on the story of the soldier.

But somewhere along the way, the once-acclaimed series lost its luster, and while the Medal of Honor name was still recognizable, competition from top-tier first-person shooter developers and shortfalls in the franchise's innovation and quality caused the series to lose relevance.

With this year's modern day series reboot -- simply called Medal of Honor, and set in modern-day Afghanistan -- EA hopes to once again put the franchise at or near the top of the genre.

Here we speak to EA Los Angeles' Greg Goodrich and Rich Farrelly, Medal of Honor's executive producer and senior creative director, respectively, and EA Games label president Frank Gibeau, who admits the franchise "did fall on hard times," but is confident of a turnaround.

Frank Gibeau: With Medal of Honor, we're rebooting the series to get into the top 10. I was not satisfied with the sales of Airborne, and it was a project that I inherited when I came into this label, and at the very last minute. We basically had a month on it. So I looked at the future of what I wanted to build inside of the Games label, and we want to be the worldwide leaders in the shooter category, full stop.

We looked at the assets, the intellectual property, and the team talent that we had, it made sense to me to bring Medal of Honor back, but it had to be brought back in a new way with a new approach, and that's what we spent the last 18 months or so working on. We're really excited so far to the response to the reboot, and we haven't even really shown that much at all.

We're going to be in the Medal of Honor business for a long time. It helped build the genre in terms of the shooter category. When we talk to consumers on the research level, there's still a very strong, positive feeling about the brand. It did fall on hard times there, but the goal is to bring it back in a bigger, better, badder way. 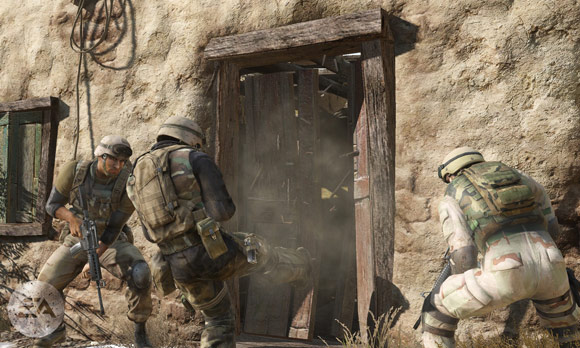 What did you see going on with the Medal of Honor franchise when you first came onto the EA Games label that you didn't like? Was the company taking the franchise for granted?

FG: Yeah. I think any franchise that's been around for a long time, they get in a rut, they become over-annualized. They run out of innovation. The team pounds on a game every year, and they get tired, they run out of time and effort to be innovative and try and take some new risks. That was my view on how the franchise has fallen.

With Medal of Honor, we felt like we needed to take creative risks with the IP, we need to put together a world-class development team to bring that product to life, and as part of the feature set, online needed to be a significant part of the offer and the design. The DICE guys, the Battlefield 1943 team were able to partner with our LA squad and they're doing some pretty remarkable stuff online for MOH that you guys will find out more about this summer.

Would you say that a lot of the fault for Medal of Honor's fall lies within EA itself, as well as the innovation that these competitors are coming up with?

FG: At the same time that MOH was falling on tough times, Battlefield 2 had shipped and was really showing some innovation. So it wasn't really an EA thing, but that [the MOH] franchise in particular was having some challenges.

In this business, it takes time for teams to gel, and getting them through a couple versions of the game is really where you get to maximum quality and big ideas. These guys are going to build this over time, and it's part of our strategy to take back the shooter category.

How will Medal of Honor break through the noise in such a competitive market? Will there be more marketing? What will EA do to put in consumers' heads that Medal of Honor is back?

FG: I've always had a philosophy in the games business that you have to win the core first. You have to be seen as quality, legitimate, and relevant for gamers, then you build out from there, and that's where you pick up the mass market.

What we've been doing over the last couple months and what we'll be doing in the summer is really appealing to the core shooter fans, that they know that Medal of Honor is coming, it's a quality product, it's kick-ass, it's got all the features and story they want.

At the same time, we're laying the groundwork for a true mass-market campaign. It'll be a big launch with a lot of dollars behind it. We're going to go in and we're going to compete.

Overall, it's not just Medal of Honor this year. We're also looking at the sci-fi subgenre, we've got relationships with both Crytek and Epic, two of the most incredible developers in the world that are creating shooter products for us as well. From an overall shooter portfolio standpoint, we fully intend to go into the shooter category to shake it up. 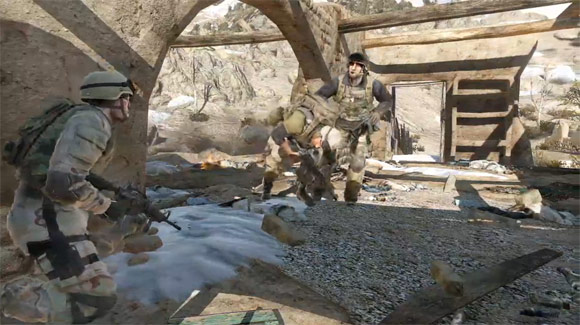 Do you feel like what's happened at Infinity Ward and the new Respawn has put you in a really good position to take over from Activision, which has ruled that category?

FG: They certainly have. Infinity Ward, what they were was a spectacular development organization. Jason [West] and Vince [Zampella, Infinity Ward heads] and their team there clearly created and did things in the entertainment business that have never been done for in gaming. So lots of respect to them. Those guys are big players.

The fact that we were able to take advantage of an opportunity that came our way and partner with Respawn and create a relationship with them has been spectacular, something that we're very excited about. It's a key part of how we're growing our EA Partners business going forward.

That was something that fell into our laps, after they were terminated and announced they were free and independent, and we went for it. The fact that those guys are doing what they're doing, we're very excited.

This was described late last year as a reboot. It's been set in World War II since the start. Why was it the right time to "reboot" the series, and why did it take so long?

Greg Goodrich: I think that a lot of stories had been told in the World War II timeframe. When we set out to do this new game, we talked to some individuals, and their stories that we wanted to tell happened to be taking place in the modern day, and in this current fight in Afghanistan. It was sort of a natural progression for us. It sort of chose us.

From a production standpoint, there was some restructuring at EA LA. How did that change the way that you made this Medal of Honor game?

GG: This is Rich's and my first Medal of Honor. But right now, the game is stood-up, meaning the game is playable from beginning to end. We took broad brush strokes in the beginning on this so we could get the game up and running in its entirety, and see how it plays.

Now we're just turning the crank, we're in polish phase. We're just trying to get every bit of meaty goodness out between now and the ship date.

Rich Farrelly: The biggest difference is the team size. We aren't nearly as large as we've been in the past. It was in excess of 150 in the past. We're a lot smaller, more focused, and have more veterans on the team, so it makes building the product and standing it up a lot faster.

GG: We're not really in that crunch phase that you normally see at this point in a project. We've got kids, we're going home, we're having dinner with our kids at night, we have our weekends, and it's a pretty nice place we're in right now.

People are coming in and working hard, doing everything they can do... to [deliver] a game that's going to set a new course for this franchise, and hopefully put it back where it once was among the greatest shooters of the generation. That's our goal: to hit that quality level.

It's interesting that the team is smaller, but there's less crunch. Do you just attribute that to a more focused, more experienced team?

GG: I would say definitely it's focus, a clear creative vision, and quite frankly it's because we had a really good plan, and we're executing on it. Game development is about proper planning and great execution.

RF: It's also about making smart decisions during production, knowing what to really focus on and spend your money and time on, and knowing when to let some stuff go, and getting your team behind some solid, core game talent.

And the multiplayer component is being developed by DICE.

Was DICE there from the very beginning of development of Medal of Honor?

GG: Not the very, very beginning, but once the location and universe and the story were set, and the types of things we wanted to do and tell and let the player experience, they came into and just started cranking. I think they started right after Battlefield 1943 came out. They bolstered their efforts [on Medal of Honor] as time went along.

There are a lot of military shooters under the EA umbrella, and who knows what Respawn will come up with. Are there any kinds of concerns of having to compete with other EA products?

GG: We actually talked about this a lot internally. Battlefield and Medal of Honor are two very different franchises. They have a certain tone, and we have a certain tone for our game. We think there's room for both, not only in the genre, but within EA. We deal in historical fiction, and Battlefield does something different. This is a game about a group of individuals, about the soldier.

GG: Bottom line is that we, and most of us in the building, we're shooter fans. So first and foremost, we love shooter games. And all those individuals you mentioned create phenomenal first-person shooters, and we wish them the best of luck, as consumers. We also have our heads down and we're building a game right now, and we've missed a lot of stuff going on. But we wish them the best of luck, and we can't wait to see what they come up with.