We talk to Bob Loya about how a passionate kernel of game fans within Activision convinced the giant to take a chance on reviving the Sierra label -- and what the future could hold for the initiative.
Simon Carless
Blogger
August 15, 2014
The Sierra brand is back, as a "developer-led indie initiative" within publishing giant Activision. Director of external development Bob Loya says the revival -- which will see Activision partnering with small teams to make mostly digital games -- was a passion project from insiders. "It's been a long time in the making," says Loya. He has worked in the industry, effectively at the same company, since 2001, beginning with Universal Interactive (the company which would become Vivendi Games, later to merge with Activision), and he and several colleagues had long-time hopes of finding a way to return to smaller games even within the infrastructure of a publisher that currently only makes big budget, high-margin products. "We were always wanting to find ways to work on smaller projects with cool mechanics -- the games we like to play ourselves. There wasn't a path there at Activision until recently, now that digital has exploded," Loya says. "With Xbox Live, PlayStation Network and Steam, we were able to put together a compelling business case for why Activision should be there, and how we would be successful." The Misadventures of PB Winterbottom developer The Odd Gentlemen is doing a new game in Sierra's historic King's Quest series, while the Lucid Games team will make a new Geometry Wars title, Geometry Wars^3: Dimensions, which adds many more modes to the popular twin stick shooter, and places the player on unique 3D shapes instead of in two-dimensional space. "We started with 'let's really take advantage of the digital space, where we can really make great games properly and hit a different consumer,'" Loya explains. "And then we started to look at developers more than anything else. I've been talking with [The Odd Gentlemen] since they were at USC, and I've always wanted to do something with them."

"We have a gigantic back catalog. It's about finding the right developer, matching it with that IP and making the right game."

Sierra partner developers and their projects are a "you know it when you see it type of thing," Loya says. "The first thing we ask developers is 'what excites you,' what do you want to do, what is your passion project, et cetera. So for us, that's the most important thing." Although the criteria for a Sierra game are fairly loose -- any indie project that seems to be the right size and hit the right quality bar -- the opportunity is there for the entire back catalog of Sierra, Infocom and old Universal and Vivendi IP to be revisited. "We have a gigantic back catalog," Loya says. "It's about finding the right developer, matching it with that IP and making the right game. We're really going to focus on modernizing those games and taking them to the next level -- storytelling, mechanics, anything cool and unique." "Who knows where this goes? We can help teams grow studios, build IPs and have the opportunity through Activision to do bigger things," he suggests. "Sony and Microsoft are doing amazing things in the indie community, and it's something we feel we can do as well." Loya also says it's not such a stretch that Activision would be working in the smaller game space, as the company has been producing digital content for its larger brands for a long time. For the Sierra initiative, the main areas of focus will be Steam, Xbox Live and PlayStation Network for now -- "we're not trying to rule out anything, but we're trying to be thoughtful about how we do things," Loya says. "There's a high bar when you put a Sierra name on something. We need to make sure we're doing things the right way." "We passionately wanted the ability to work with different teams on different IP," says Loya. "It adds diversity to what we've been doing, and digital certainly isn't getting any smaller." 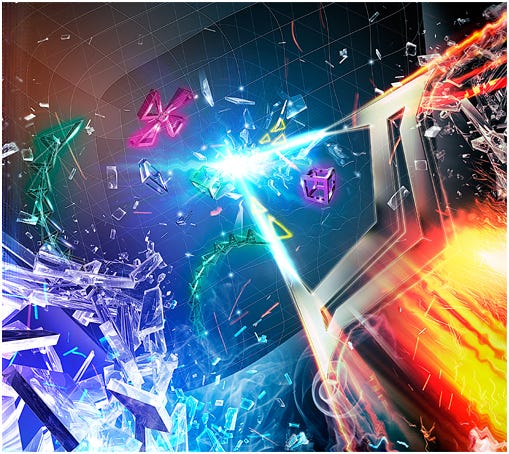 Geometry Wars^3: Dimensions
The Sierra label is eager to work with both established independent studios and small teams looking to bring highly-original ideas to console. But will those developers want to work with a monolithic publisher like Activision? "From the reactions I've personally gotten over the past 24 hours, I don't think that's going to be an issue," says Loya, who suddenly finds himself with an inbox full of hundreds of emails. "A lot of developers love the Sierra label; it's nostalgic, it's a vision, and people understand what you mean when you say it. It sets certain expectations for them." Some Sierra titles may even have the opportunity to be boxed on retail shelves. Loya says. "We have a lot more that we want to talk about," he says. "For me this is new, so it's very frustrating that I can't tell everybody everything. In the next two to four months, you'll hear a lot more." The Odd Gentlemen will begin unveiling their King's Quest game, in which iconic King Graham recounts his adventures to his granddaughter Gwendolyn, in January.
ProgrammingConsoleProductionDesign
Get daily news, dev blogs, and stories from Game Developer straight to your inbox
Subscribe