"The HDK 2 hardware specifications are comparable to the best virtual reality headsets available now, [and are] on par with the Oculus Rift and HTC Vive."
Chris Kerr
News Editor
June 13, 2016

Razer has unveiled the next edition of its "Hacker Dev Kit" virtual reality headset, which will retail for $399.99 when ships in July.

The new HDK 2 headset isn't too dissimilar from the HDK 1, which retails for $299.99, and includes many of the same base features such as IQE image enhancement tech - for reduced screendoor effect - an IR camera that operates at 100hz, and a sensor hub with an integrated accelerometer, gyroscope, and compass.

The biggest change comes in the form of an all new 2160x1200 low persistence OLED silver screen dual display, which runs at 90 fps.

It's a notable improvement over the HDK 1's display, which was only capable at showing VR experiences at 60 fps.

Razer hopes the upgrade will give it the clout it needs to compete with high-profile rivals, with the hardware outfit suggesting "the HDK 2 hardware specifications are comparable to the best virtual reality headsets available now," and "on par with the Oculus Rift and HTC Vive."

Both the HDK 1 and HDK 2 will run on Razer's Open-Source virtual Reality (OSVR) platform, which is Razer's attempt to create an open virtual reality ecosystem that can be implemented across different brands and companies.

According to Razer, OSVR will eventually give VR users "the freedom to combine different brands of HMDs and controllers to experience VR the way they want to."

"We are on a mission to democratize VR by offering open, affordable, high-performance software and hardware solutions with nearly-universal device and game engine compatibility," added OSVR co-founder, Yuval Boger.

A comparison chart provided in a Razer press release shows how the HDK 2 stacks up again the competition. 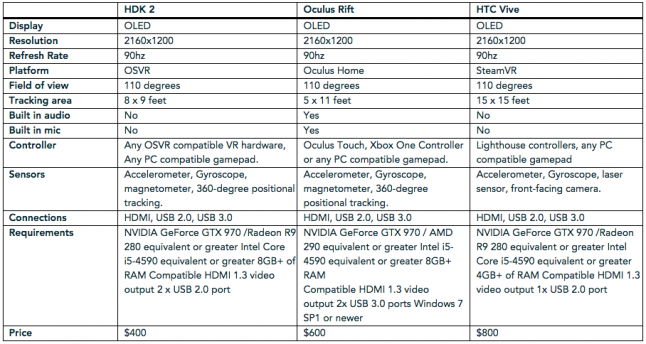