Sony is finally getting ready to let PlayStation 5 owners upgrade their SSD storage, although it seems the SSD requirements themselves will be rather specific.
Game Developer
Staff
July 29, 2021

Sony is finally getting ready to let PlayStation 5 owners upgrade their SSD storage, although it seems the SSD requirements themselves will be rather specific.

A beta version of the PS5's upcoming system software update is currently being rolled to select users, meaning a fraction of those 10 million lucky PlayStation 5 owners can now add more storage to the hulking machine.

In outlining exactly how to do that, Sony made it clear not any SSD will do. Firstly, the PS5 will only support an M.2 SSD, which isn't necessarily a massive hurdle because there are plenty of those about.

That M.2 SSD, however, must meet a number of specific requirements. To deliver optimum performance and (hopefully) match the console's internal SSD, it'll need to feature a PCIe Gen4 interface, offer 5,500MB/s or faster sequential read speeds, include between 250GB and 4TB of storage, and have a module no wider than 22mm.

Crucially, PS5 owners must also find a way to install "effective heat dissipation," ether by choosing an M.2 SSD with a built-in heatsink or buying and attaching one themselves -- either in a single-sided format or double-sided format (you'll also have to consider form factor here, too).

Sony also says it can't guarantee that "all M.2 SSD devices meeting the described specifications will work with your console," and adds that "not all games are necessarily playable with the exact same performance provided by the PS5 console's internal Ultra-High Speed SSD, even where [...] the device's sequential read speed is faster than 5,500MB/s."

Beyond that, the Japanese console maker suggests beta software testers looking to utilize the feature bring together a small flashlight, a #1 Phillips or cross-head screwdriver, and a well-lit room with a table before beginning their SSD transplant.

The full explainer on how to select and equip an M.2 SSD can be found on the PlayStation website, but you can find a list of requirements posted below. 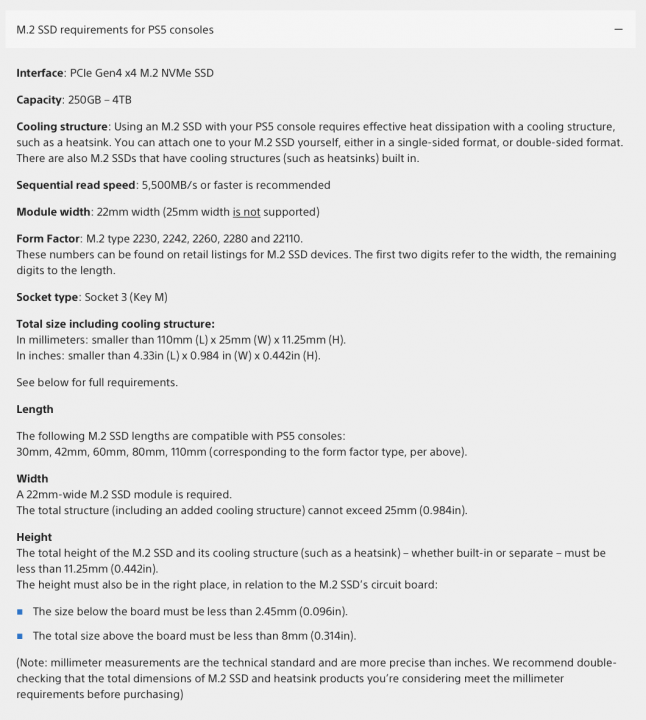