Profits up in Sony's games division as PS4 sales near 60M

Sony is the latest company to release its financials for the full year ended March 31, 2017, and both sales and profits are down across the company as a whole.

Sony says that positive showing was primarily due an increase in PlayStation 4 hardware and software sales, and rising digital sales.

As the graph below shows, PlayStation 4 sales hit 20 million units during the last financial year (FY16), up on the 17.7 million units shifted in FY15. Using that new data, it's fair to assume lifetime PS4 sales now stand at the 60 million mark, given Sony reported lifetime sales of 40 million just under a year ago.

As it stands, Sony isn't expecting to repeat that performance in the next financial year, but is still hopeful of selling another 18 million consoles by the time FY17 draws to a close on March 31, 2018.

If all goes to plan, Sony expects profits in the division to rise by 14.6 percent to 1.89 trillion yen ($16.9 billion) by the end of the next fiscal year.

Company-wide, Sony is forecasting sales of 8 trillion yen ($71.8 billion) and profits of 255 billion yen ($2.3 billion) over the same period, an increase of 5.2 percent and 247.9 percent respectively. 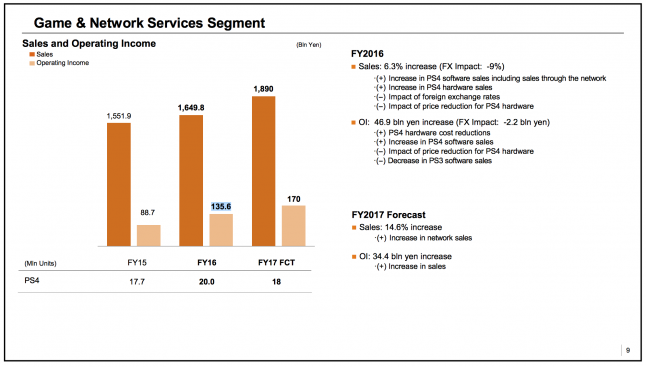