Net sales and profits have increased at Nintendo thanks to bumper Switch hardware and software sales.

Switch hardware sales increased by 37.1 percent year on year to 28.83 million units, pushing the console to 84.59 million lifetime sales. That upswing was driven by "strong" Switch software sales which reached 230.8 million units for the full-year -- an increase of 36.8 percent year-on-year.

Digging into those numbers, Nintendo revealed that 8.51 million of those hardware sales were attributable to the Switch Lite, with the remaining 20.32 million resulting from sales of the original Nintendo Switch.

In terms of software, digital sales accounted for 42.8 percent of all software sales -- an increase of 8.8 percent year-on-year. The company explained that sales of download-only titles and sales related to Nintendo Switch Online were also "steady," helping to bring digital sales revenue to 344.1 billion yen ($3.1 billion) -- an increase of 68.5 percent year-on-year.

Looking ahead, Nintendo is forecasting net sales of 1.6 trillion yen ($14.6 billion) and profit of 340 billion yen ($3.1 billion) for the end of the next fiscal year on March 31, 2022. The company said its ultimate goal moving forward is to "continue to convey the appeal of the hardware and software and maintain sales momentum at a high level." 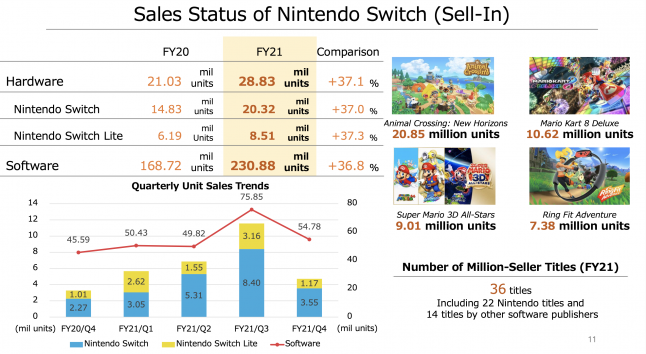 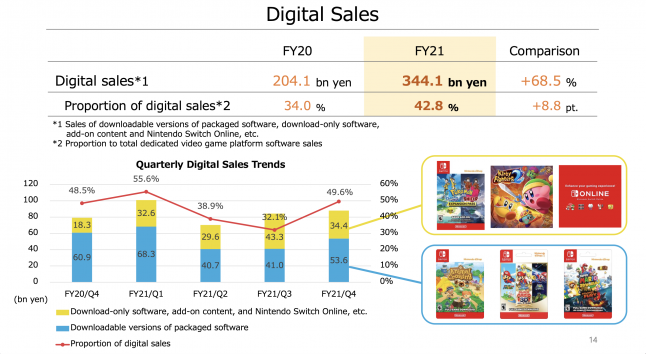