Check out this example of turning production budget into marketing campaign by creating products that promote themselves.
Chris Toepker
Blogger
March 07, 2016

What to do when you’re a start-up that has dedicated everything to product development and yet need to do marketing? Make the products promote themselves!

Kuboo.com faced a difficult problem: the mainstay framework and game was technically ready, but there was no marketing budget to speak of. How could an audience be found, addressed and attracted? We needed a partner that was equally interested in educating kids and families, using technology in innovative ways and spreading a message of care and safety. Enter the Arizona Humane Society (AHS).

By wisely investing the dedicated production budget, listening carefully to our strategic partner and closely coordinating what marketing resources we had, Kuboo realized a “products that promote themselves” win.

Dr. Kris Haley, Manager of Humane Education at AHS was implementing wide outreach programs that educated Arizona kids about empathy for animals. She was interested in not only reaching out further to become a technology leader among other humane societies, but also in reaching deeper into kids’ lives and teaching them pet care on a daily basis. A perfect match! 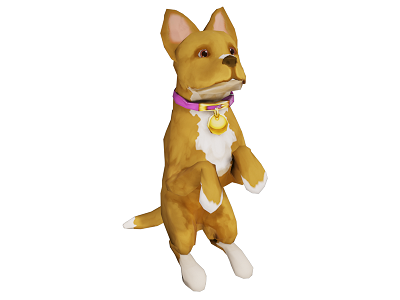 Therefore, we sat together and went over Dr. Haley’s empathetic approach. By increasing empathy for animals, a child’s compassion would be awakened, and this leads to action to make animals’ lives better. Practically speaking, kids’ attention is focused on the animal itself. Any pet owner recognizes that animals let you know how they are feeling – happy or hurt, energetic or apathetic. Watching them and providing care accordingly is necessary, and also fun.

Dr. Haley and the AHS team outlined a wide variety of care that kids could take responsibility for and would obviously contribute to a pet’s well-being. Things such as feeding, bathing, brushing, exercise, and training. Yes – training can help a dog feel part of the family “pack.” So, we spent quite a bit of time understanding the “clicker” method of training and how dogs behave throughout the process.

Equally important to AHS was readying families for adoption. This meant no pure breeds in the game. Pets at AHS are rescued at all ages, and are of all kinds. So, collecting and raising specific breeds, like in something like “Nintendogs” was out.

Back in the studio, we looked over the input and put together our design. To start, we created a system that would randomly generate dogs. By creating a variety of bodies, noses, ears, tails and textures we were able to ensure that kids would be presented with a huge variety. Without getting into specifics, it’s safe to say that we never expected any two dogs in Kuboo to ever be alike.

At the same time we designed gameplay. Simply put, it would be familiar to anyone familiar with Tamagotchi. We created a system of countdown clocks to drive the dog’s behavior. Each clock was then associated with a Care Event. If care was provided in a timely manner, a Happiness score would increase. As a clock approached zero, the dog’s behavior would change to show it needed care. 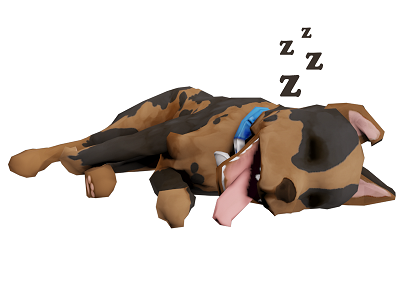 Importantly, onscreen timers were not presented. Instead, animation and effects were used to highlight the Care Event needed. For example, if the dog’s nails needed trimming, limping would be seen. If the dog needed a bath, a green cloud of “stink” and bugs would be seen. This naturally leads the child to focus on their virtual pet, which is the heart of the empathic method Dr. Haley uses.

Of course, no pets in Kuboo ever die or get deathly ill. Still, a dog can go Lethargic. As the Care Event countdown clocks reach zero, there is an increasing chance the dog will become Lethargic – it will just lay there, and a small “med kit” icon is displayed. To “cure” a dog of Lethargy, the child has to pay a small amount of easily-earned virtual currency and watch a video about pet care from AHS veterinarian Dr. Lannen. This increases the real-world learning, as well as increases association with AHS adoption center.

Originally the countdown timers were very realistic. Feeding was required twice a day. Walkies every day. Bathing once a week. And so on. Equally, the countdown clocks were completely hidden – kids would have no overt way to see when the perfect time for delivering care would be. During development, the team increasingly felt this was too difficult and punishing. After all, the kid is not in charge of how often they can log in and play. If they weren’t able to log in for days, their dog would always be Lethargic! As a result, two major changes were made. First, the clocks were lengthened so that care was needed on mostly a weekly basis. Second, a notebook was added so that kids could double check where the countdown clocks were.

Then we added a training mini-game. Using a basic scrubber bar mechanic to mimic the clicker, kids could now train their pet to sit, stay, and so on. At the same time, we ensured that Happiness would be tracked for each individual pet and created thresholds for Beginner, Pro and Champion trainers.

Finally, we created a “leash” mechanic that allowed the child to take their dog through the virtual world. This was important not only as part of the pet care game, but also socially. We wanted kids to be able to show off their dog, the tricks it had learned and how it would fit into activities elsewhere in the world.

After approximately three months of development, we introduced the prototype to AHS and Dr. Haley. They were thrilled, feeling that we had strongly captured their input and presented it in a way that helped them achieve their “leaders with technology” goal. They also agreed that when kids’ achieved the Pro or Champion trainer levels, they would offer steep discounts on adoption and merchandise for real-life pet adoptions.

This result was exactly what we had worked for – now AHS was willing to activate their audience and point them to Kuboo. Immediately we coordinated a roll out through social media, making announcements and delivering sign up encouragement through emailing, Facebook and Twitter.  Equally important, Kuboo materials were included in AHS school outreach programs, putting our materials directly into the hands of interested kids. They were also made available at the AHS retail locations, as well as a variety of supporting retailers across Phoenix. Perhaps most exciting, AHS featured Kuboo on their super-popular weekly “Pets on Parade” TV broadcast.

Throughout that campaign, the free-to-play message was delivered to kids, while parents were provided a ready-made answer for the age old “can we have a pet” question.

The promotional win was further followed up by interweaving the pet adoption game with Popeye Village introductory quests, encouraging kids to become involved in activities across the virtual world. More on that next time!