From its first trailer that told gamers to "Please Remain Calm" to its release this week, Halo 3: ODST underwent substantial changes. Originally conceived as an add-on for Halo 3, ODST evolved into what Microsoft today bills as a fully fleshed-out experience.

As the final vision of the game took shape, Bungie's 70-person ODST team, which included a five-person core design team, met challenges from a personnel and technical standpoint during the course of the game's development -- which lasted about one-third as long as a typical Halo game.

Gamasutra spoke with Bungie's ODST executive producer Curtis Creamer. He's one of the 165 full-time employees at the Halo studio, which is currently working on the upcoming Halo Reach, as well as another unannounced project (for reference, when Halo 3 shipped, Bungie employed around 110-120 employees).

Here, Creamer elaborated on the hardest part about making ODST, how Bungie adapted to challenges, and the new elements that ODST is bringing to the blockbuster Halo universe.

Can you talk about the hurdles you encountered in the development of ODST? What issues did the team run into, and were people ever at odds, creatively?

Curtis Creamer: Creatively, the team really was pretty cohesive. The biggest challenge behind making ODST was that we were trying to make it in a timeframe that we hadn't made a game in anytime recently. For the previous Halo games, we're talking about three-year development cycles.

In ODST, we were shooting for about a year of development time. The challenges for us were having an understanding of just how much of a game we could make in a year, and also knowing the aspirations we were going to have, and how we were going to pull those off with all of the limitations we had as a studio.

When we were making the Halo games, it was something everyone in the studio was getting on board with, but at the end of Halo 3, we had split up. There were people working on Reach, people working on another project, and people working on ODST. We didn't have the full resources available for the project like we would normally have. We didn't really understand exactly how much we could make and how far we could push the technology.

The biggest challenge for us was with the design of the game. We decided we wanted to focus the story in one location on Earth, in New Mombasa, whereas in the previous games, you were jumping from the Halo ring to Earth to a Forerunner installation to a different side of the ring -- but now it's snowing. The environments were really different.

The city itself was really big, so the idea of making a city that had a non-linear type of movement through it was something that the Halo engine had never really been designed to do. That was probably the biggest technical challenge for us -- how are we going to create this gigantic city? How are we going to make it do things the engine was never set up to do? And then, how are we going to do it with fewer people and on a shorter timeline? 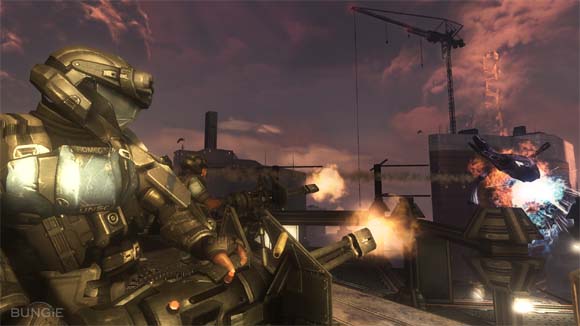 There were a lot of technical problems that we could have run into there, but our strategy was that we wanted to build some modularity into it, so we could get some reuse out of some of the assets we were making. It was a big technical challenge, and it took a lot of effort for how we were going to make this non-linear space work with an engine that was meant to handle linear spaces.

...Halo 3 ODST was based on the Halo 3 engine -- which is why we left Halo 3 in the title -- but we did have to make modifications. There were changes needed to support the difference in gameplay mechanics for playing as an ODST rather than a Spartan, adding new features such as the VISR, which enhances nighttime vision and enemy acquisition, and all of the underlying code that supports Firefight [mode].

Another area we had to focus on was developing new AI systems that would support the open non-linear environment of New Mombasa. Typically in a Halo mission we always knew which direction the player would be coming from and we had AI that worked very well in that situation.

But with the open environment, we had to develop ways that the covenant could intelligently patrol the city, and react intelligently no matter where they were attacked or from what direction. 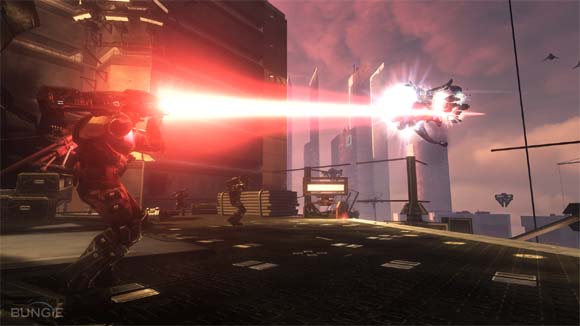 Halo 3: ODST  is different from other Halo games in a few ways. One is the inclusion of "Sadie's Story" [a sub-story about a civilian in ODST's city of New Mombasa], which goes beyond the typical warrior's tale. Does this mark a change going forward for storytelling in Halo games?

CC: There were a couple of things that made that happen. For Halo 2, we worked with these guys -- 42 Entertainment -- to do the "i love bees" marketing campaign, which was like a real-world [alternate reality game]. We continued to have close contact with some of those guys. Some of them left 42, and ended up starting their own company called Fourth Wall Studios.

Since we were on a really tight development schedule, we knew that we would need some help in telling a really interesting story. We had the idea that we wanted to try to do something like the "i love bees" type of story, but instead of making it a real-world sort of thing, we wanted to try and create that experience within the game itself. We thought that [Fourth Wall] could help us with the story.

We really wanted to get more down to the street level for what we were telling as a story in the Halo universe. We thought it would be super-interesting to explore the idea of what happened to the people who were living in New Mombasa, so this was a fun, creative new way for us to leverage some of the things that we have done in the past with Halo -- like with the terminals in Halo 3 -- and also create the experience like the "i love bees" guys did with Halo 2.

Moving forward with Halo Reach coming out, will you continue this evolution of storytelling within the Halo universe?

Sure, but regarding nothing specific, you're obviously going to be taking some lessons you learn here and move them forward.

CC: Yeah. We're always looking for new and creative ways we can tell a story. That was one of the appeals to doing ODST, that it was an opportunity to tell stories in some new and interesting ways. It was a great way for us to change up the timeline and change up who the main characters were, and using that as a springboard to try some new ideas.

There's something else in ODST that's different from previous Halo games -- the Firefight mode. It's kind of Horde-type gameplay. What was the inspiration behind that?

CC: It's something we had talked about doing before, so it wasn't a brand new idea. I would say that technically, in how we wanted to pull it off, that the seeds of that are in Halo 3's campaign. You can turn on campaign scoring, and play through the campaign experience in a way that you could compete, play as a team, and earn points.

That's where the seeds of that idea technically came from. We always knew that would be a cool gameplay mode. It's just not something we thought we had the bandwidth or the scope to pull off. This was a good opportunity to try some of those other things we hadn't had the chance to do before.

This game was originally conceived as a lower-priced add-on, and then it grew into something bigger. Can you talk about how Bungie may have struggled with the concept of value, and drawing guidelines between, "This product here is worth $40, but this here is worth $60?" Was it just a matter of adding bigger spaces, or bigger levels? When was the pricing decided?

CC: Earlier on, we were talking about it in terms of it being an expansion pack. It was basically because we didn't have any data or understanding of how long it would take us to build an environment in an engine that was pretty much done and stable, and that the artists actually had some experience in.

We had tons of data regarding how long it took to build a Halo 2 or a Halo 3 mission, but that was always based on an engine undergoing work. There were stability issues where you would lose time, and so on. We just didn't have a great idea of how much we could make.

We really didn't want to over-promise on something we weren't sure we would be able to deliver. [The question of] "What can we make?" was in competition with our high aspirations for what we wanted to do. We had great ideas for what the city of New Mombasa could be like, and the type of gameplay we could do that would be different.

When we thought about value and the $30 or $40 price point, we were thinking that if we did end up making just an expansion, like a two- or three-hour campaign add-on experience, we would team that up with the additional work we've been doing on the Halo 3 competitive multiplayer experience with the extra maps we've been making. That seemed like it would be a reasonable value offer for $30 or $40. 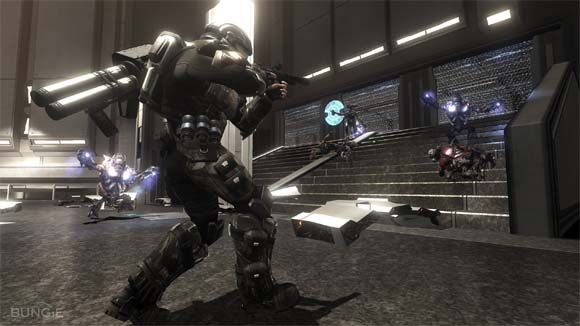 But basically, as we went through development, realizing these efficiencies we had been trying to get, the game was ending up to be quite a bit bigger than anything we thought we could pull off at the beginning. That's when the value of it changed. We really were able to come up with a complete campaign experience, like you would expect from any of the previous Halo games.

On top of that, the Firefight game mode ended up being a lot more successful than we thought it would be, and we were able to create a lot more spaces for that to happen in as well. We thought that putting all that together with the Halo 3 competitive multiplayer experience was a good, full-sized product.

There are reports that the game was done a while ago, sometime in the spring. If that's true, why is it launching at the end of September? Is that purely a marketing move, to have it be a big fourth quarter release?

CC: That's a decision that gets made by our publisher, Microsoft. We did finish the game. It was handed off at the beginning of May, and it was up to them to make the right decision as to when it made the most sense to release it.