Oculus devs will no longer have to rely on third-party applications and data providers to find out how their apps are faring on various platforms.
Chris Kerr
News Editor
March 20, 2018

Oculus wants to give its developers the ability to make data-driven decisions by granting them access to PC and mobile hardware reports for the Oculus Rift and Gear VR.

In short, that means Oculus devs will no longer have to rely on third-party applications and data providers to find out how their apps are faring on various platforms.

Both hardware reports will provide aggregated and anonymized statistics on active, Oculus platform-level usage, and will be updated daily to offer a rolling 28-day platform snapshot.

The Rift report (shown below) will feature CPU, GPU, and OS breakdowns, while the Gear VR report will spotlight the distribution of phone model types, chipset, and OS.

In addition to those hardware and software stats, Oculus will also provide a heatmap that highlights the play area space that people use with their Rift, along with the inputs that Gear VR users have access to.

Reports can be found in the Developer Center under the 'discover' tab, and can be accessed without a developer ID. You can learn more over on the Oculus blog. 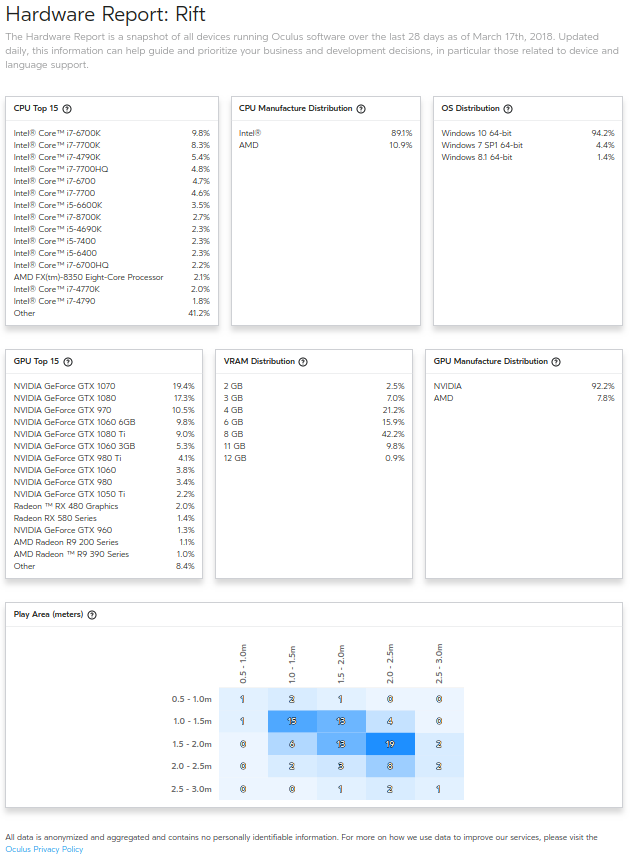