Today Oculus VR chief Brendan Iribe took the stage at the company's inaugural press conference in San Francisco to showcase the first commercial version of the Rift headset, talk up some upcoming VR games from the likes of Insomniac and CCP, and announce a partnership with Microsoft.

That last bit is particularly intriguing, as it appears to be an aggressive move on Microsoft's part to back a VR heavyweight and afford the Xbox team an answer to Sony's upcoming Project Morpheus VR headset, which shares the Oculus Rift's first quarter of 2016 launch window.

Xbox chief Phil Spencer briefly appeared during the event to talk up plans to package an Xbox One gamepad and a wireless PC adapter for the controller with every Rift headset, the idea being to encourage people to play Xbox One games with the Rift by taking advantage of Windows 10's advertised ability to stream Xbox One games to a PC, then displaying that streamed game on a virtual cinema screen inside the Rift.

To be clear, there was absolutely zero talk of the Rift working directly with an Xbox One console, or of any Xbox One VR games.

Oculus also confirmed partnerships with a number of developers to bring ported and original VR games to the Rift, including Insomniac's upcoming Rift-exclusive third-person adventure game Edge of Nowhere.

Developer-oriented announcements were almost an afterthought -- this was a consumer-oriented event, after all -- but Oculus dev relations chief Anna Sweet did take the stage to announce plans for investing "more than $10 million dollars" into "accelerating independent game development" on the Rift platform. Gamasutra has reached out to the company on how this investment plan will work, and how game developers can benefit from it.

Oculus didn't name a price for the consumer version of the Rift, but did say the headset will ship with a new tracking sensor designed to stand on a nearby desk and track the headset's movement in 3D space using a new "constellation" system of sensors embedded in the device.

The headset will have a built-in slider for adjusting the distance between its lenses, as well as built-in speakers capable of 3D positional audio that can be removed if a player wants to use their own headphones. You can see the Rift for yourself in the goofy promotional image embedded below.

Company founder Palmer Luckey closed out the hour-long event by taking the stage to talk about "one more thing" -- a prototype of the Oculus Touch motion controller the company is currently working on that has a lot of developers buzzing, and is expected to ship separately from the Rift headest in the first quarter of 2016. 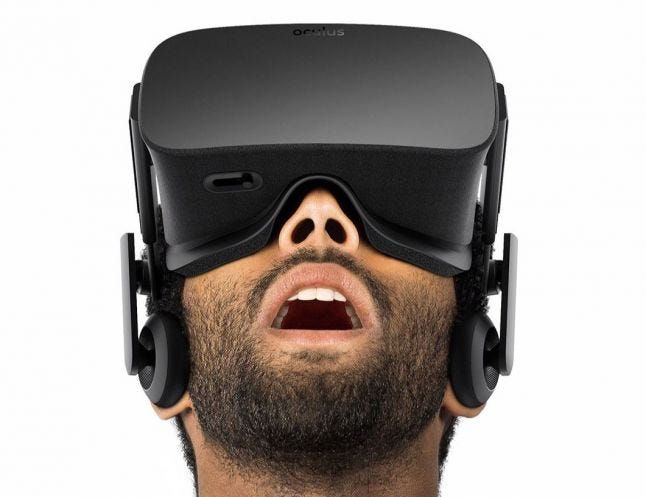