Nintendo sells 5.7 million Amiibos and plenty of games, but it's no relief

While Nintendo's stock price has slid following its latest financial results, reports are pouring in about how well its games and new Amiibo toys are doing.
Christian Nutt
Blogger
January 29, 2015

Today, Bloomberg reports that Nintendo president and CEO Satoru Iwata has revealed the company has sold "about" 5.7 million Amiibo figurines since the toys went on sale last November.

If you're interested in how Nintendo is doing, though, the Bloomberg report isn't full of much cheer. Analysts are positioning themselves against the company, and its stock has taken a tumble in the Japanese markets (8.7 percent) on the back of its financials.

Though the company has returned to profits, much of that is due to the weakening of the Japanese yen. The company actually sold slightly fewer Wii U consoles in the fourth quarter of 2014 than it did in the same period of 2013.

Today, the company also released its latest sales figures, showcasing the first party titles that have globally passed the million-seller mark so far this fiscal year (which ends in March.) Of note, Super Smash Bros. on Wii U and 3DS have so-far sold 3.39 million ad 6.19 million copies, respectively.

The full chart is below (note: units are in ten thousands.) 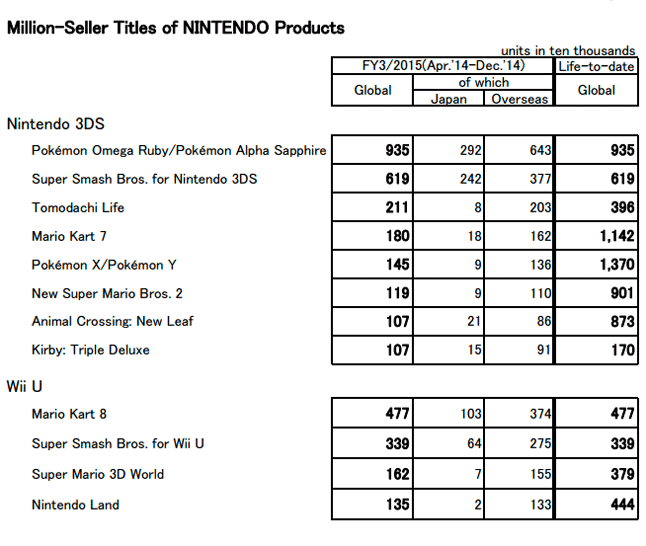