Nintendo is preparing to introduce a subscription plan into Animal Crossing: Pocket Camp, doubling down on the model initially used in Mario Kart Tour last month.

In an email sent out to Pocket Camp players (posted on ResetEra), the company said it would be celebrating the game's second anniversary by rolling out a new paid membership service called Pocket Camp Club.

Due to launch on November 21, Pocket Camp Club will come in the form of two different subscription plans: one that lets players receive fortune cookies and store their clothes and furniture in warehouses, and another that lets them bring in a "camp caretaker" to get some extra help around their campsite.

It's currently unclear how much each package will cost, although we'll likely find out in a few days time, with Nintendo promising to share more details on November 20.

This isn't the first time Nintendo has experimented with monetization methods on mobile. The company's first proper smartphone game, Super Mario Run, was a free-to-download premium experience that asked players to pay $9.99 for the full game after completing a set of demo levels.

Although the game was downloaded over 150 million times, only 10 percent of those translated into full purchases. After that, the company pivoted towards more traditional free-to-play methods with titles like Fire Emblem Heroes, Animal Crossing: Pocket Camp, and Dr. Mario World, which feature a variety of in-app purchases.

You can see the email Nintendo sent out to Pocket Camp players below. Thanks again for the spot, ResetEra. 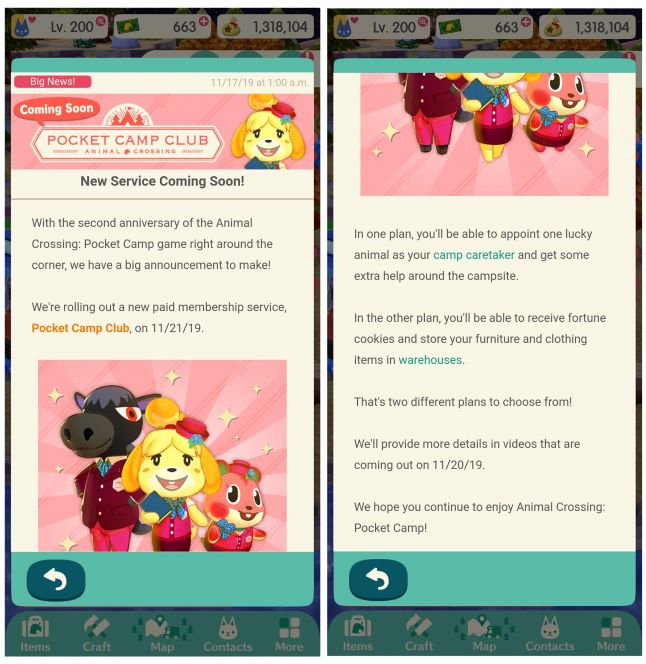