NetEase has found success in Japan with a handful of carefully tailored, stand-out mobile titles, but Chinese competitor Tencent is instead focusing its efforts on emerging territories.
Louise Shorthouse
Blogger
September 13, 2019

The lucrative and established Japanese mobile games market is difficult to crack; partially due to the audience preference for domestic titles and publishers. NetEase, however, has recently found success there with a handful of standout titles, whilst Chinese competitor Tencent is nowhere to be found. 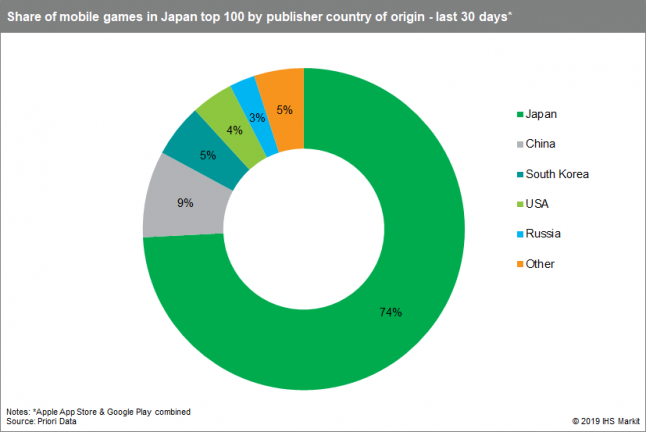 According to Priori Data, Japanese publishers represent 69% of the top 100 mobile games ranked by net revenue in Japan for the last 30 days. NetEase is the foreign publisher with the most titles in the list. Four games make the cut: Knives Out, Identity V, LifeAfter and Great Kingdoms. Russia’s Playrix and Hong Kong’s Six Waves Inc. follow behind, both with 3 games in the list.

NetEase is targeting the Japanese audience through carefully curated, culturalized content. Knives Out is now a familiar presence amongst Japan’s top-performers, but the publisher’s further offerings are also proving popular.

NetEase’s asymmetrical horror game Identity V is a recent hit and has racked up net revenue of $32.1m in Japan in the last 30 days – peaking at no.2 in the daily charts. 80% of the game’s net revenue is generated there.

Despite being established on console and PC, this genre is relatively new to the mobile platform. Visibility is everything on saturated app store fronts, and Identity V is managing to establish itself above the noise of RPGs, simulations and battle royale games by addressing the Japanese thirst for quirky horror.

A crossover event with Persona 5 in August saw revenues spike for Identity V. This strategy is well-established: it can re-engage lapsed players whilst also expanding reach and attracting fans of the featured IP.

This has been seen in other games like Fortnite but is especially common in the Japanese market. Pokémon GO recently hosted a crossover event with the anime One Piece, and Monster Strike (a top-performing title in Japan for many years) has previously featured characters from the Final Fantasy series.

As NetEase targets Japan, Tencent is instead focusing its efforts on emerging territories. PUBG Mobile Lite – the lightweight version of PUBG Mobile – has been pushed out into multiple Android-first markets with high numbers of low-spec smartphones, including Indonesia, Thailand, Brazil and India. It had over 40m downloads in August alone.

In their respective target markets, both NetEase and Tencent are catering to local tastes and needs.