Earlier this week the internet was hit with leaked photos of an all new, accessible Xbox One controller, and now Microsoft has officially lifted the lid on the device.
Chris Kerr
News Editor
May 17, 2018

Earlier this week leaked photos hit the internet showing an all new, accessible Xbox One controller, and now Microsoft has officially lifted the lid on the device.

Dubbed the "Xbox Adaptive" controller, the gamepad has been designed to make games more approachable (and affordable) for players with limited mobility.

With that in mind, the slate-like controller features a host of customization options, such as larger, reprogrammable buttons, and extensive support for third-party accessories and inputs such as PDP's One-Handed Joystick and a variety of common adaptive switches.

"Our goal was to make the device as adaptable as possible, so gamers can create a setup that works for them in a way that is plug-and-play, extensible, and affordable," said Xbox chief Phil Spencer, writing on the Xbox Wire blog.

"By taking an inclusive design approach and considerations of gamers who might not be able to reach all the bumpers and triggers or hold a controller for an extended period of time, for example, we were able to design a controller that provides a way for more fans to enjoy gaming.

"On our journey of inclusive design, we have taken a wider view of our fans and a more inclusive approach to designing for them."

The controller is available right now for $99.99 through the Microsoft Store, and the company hopes it will offer a more affordable alternative to some of the other specialist options that exist today.

The console maker plans to share more about the Adaptive pad during E3, but if you're curious to hear how the project took shape, you can check out an in-depth 'making of' feature over on the Microsoft Story Labs website. 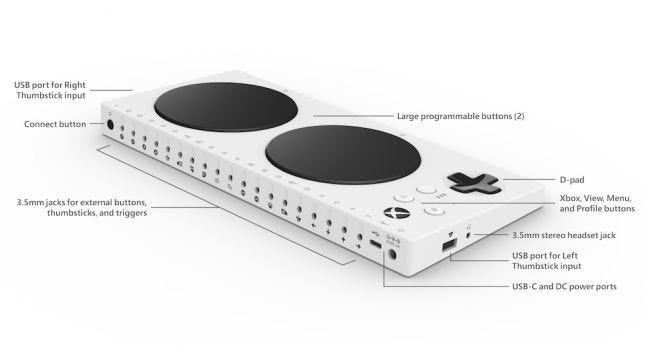