Nintendo is back in the black, but how did it get there, and what are its prospects? Gamasutra's Christian Nutt takes a look.
Christian Nutt
Blogger
May 08, 2015

Alongside its latest financial results -- which cover its full-year performance, during which it the company finally made it back into the black -- Nintendo released president Satoru Iwata's presentation to shareholders. The presentation contains some interesting data, and we wanted to break it down in a quick and digestible format.

The first thing to point out is that the company is clearly mid-generational. Sales for the 3DS (thanks to the introduction to the New 3DS) and the Wii U are stable. Though the 3DS was flagging a bit, the New 3DS boosted its sales in every territory it launched in (at least temporarily) and the latter is doing better this year as compared to last everywhere but Japan -- which Iwata puts down to Mario Kart 8 and Super Smash Bros. for Wii U, of course.

Looking at the overall trends for the system, it seems clear the Wii U has defined the size of its niche and will continue selling moderately over its lifespan -- in other words, don't expect a major spike in the numbers unless Nintendo pulls a damn big rabbit out of its hat.

In the case of both consoles, Iwata talked about the company's efforts to attract new players (the 3DS, with games targeting women; the Wii U, with games that let families play together on the gamepad) but nothing he said provided an "a-ha!" moment about how we'll see the company majorly drive them upward. Both have good lineups coming up, so a precipitous drop-off isn't likely, either.

How'd Amiibo do, in the end?

The sales of Amiibo, on the other hand, are of great interest.

During the fiscal year, the company shipped approximately 10.5 million units of Amiibo toys worldwide, with 66 percent of them going to North America. Amiibo only launched in November 2014, which means that number represents shipments over just five months (the fiscal year ended March 31.) 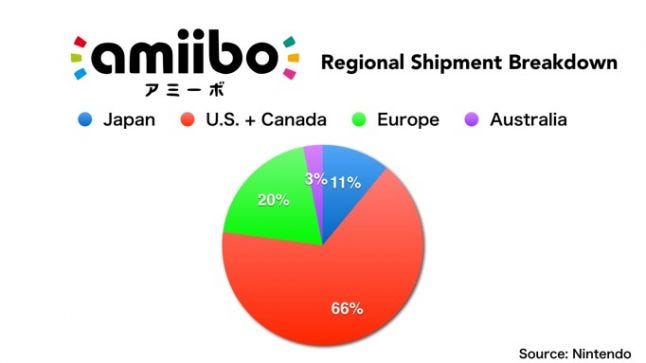 " ... the number of software titles compatible with Amiibo is increasing and consumers’ recognition and understanding for Amiibo has improved significantly compared to the launch period, so we believe that we can predict further sales growth," Iwata said.

I'd argue that a truly compelling game that uses Amiibo extremely well is neither released nor announced; I wouldn't expect Iwata to do so at a shareholders' meeting, of course. That's for a Nintendo Direct. But such a game is sorely needed if this momentum is expected to continue.

Another important figure that helps explain how Nintendo has clawed its way back into profitability (besides Amiibo and favorable currency exchange rates) is its increasing share of digital sales. Digital sales are more profitable, of course, and the company has boosted its revenue share from digital game sales tremendously. It also has begun to embrace DLC (the Mario Kart 8 DLC was both extremely high quality and aggressively marketed.) Super Smash Bros. DLC is on the way, too. 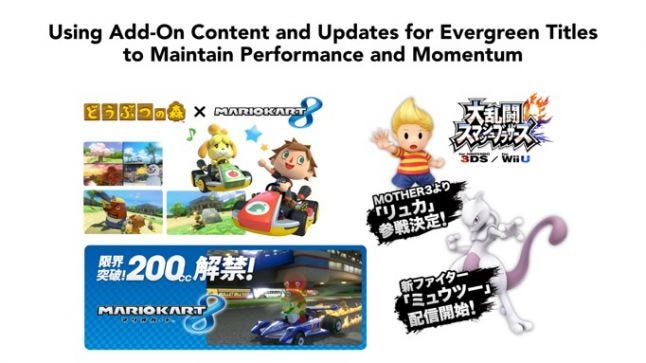 "The digital download sales increase of about 30 percent compared to the previous fiscal year should be mainly attributable to such facts as the sales of the digital versions of both the Nintendo 3DS and Wii U software increasing, especially in the overseas markets," Iwata said.

We have some charts here from Gamasutra analyst Matt Matthews that illustrate exactly how the company's digital revenue share has increased over the last 12 months:

Now, it's a nice, continuous upward climb, but 12 percent isn't a big share to be digital. For example, EA and Activision recently announced digital revenue shares of about 43 and 45 percent. Note that we're not breaking out Nintendo's digital share of total numbers (which would include hardware) but of software numbers, which makes it more directly comparable. However, the big, obvious difference is that Nintendo doesn't have any mobile revenue... yet.

The latest on Nintendo's smartphone plans

There's not a lot of new information about Nintendo's plans for smartphone games, but there are a few nuggets. As previously announced, the company (with its partner, DeNA) plans to release just one game by the end of 2015.

But Iwata mentioned that the company only has plans to release a total of five games by the end of its next fiscal year -- March 2017.

"You may think it is a small number, but when we aim to make each title a hit, and because we want to thoroughly operate every one of them for a significant amount of time after their releases, this is not a small number at all and should demonstrate our serious commitment to the smart device business," Iwata said.

The company also announced that veteran Hideki Konno has been put in charge of its mobile games. (The company plans to develop the games itself, and let DeNA handle the analytics and other "mobile" aspects it's weaker in -- hence the partnership.) Significantly, Konno lead the 3DS project -- this suggests that the company is as committed to mobile games as it was to its own new platform launch.

"We will strive to expand this business into global markets at a steady pace so that eventually we will entertain hundreds of millions of people all around the world. We are aiming to make this one of the pillars of Nintendo’s revenue structure," Iwata said.