Looking at Pay to Win

While most mobile games are free-to-play, it’s still that the free-to-play business model, are often misunderstood. In this blog post, we’ll examine some of the mythology around the idea that free-to-play games are "Pay to Win"
William Grosso
Blogger
November 02, 2016

What is "Pay to Win"

One of the most common objections to the free-to-play business model centers around the idea of "Pay to Win" (hereafter pay-to-win).  For example, a person making this objection might say

Free-to-play multiplayer games tend to favor wealthy players that will simply "pay to win", buying up all the power-ups or items they need to edge out the players who can’t afford to compete (or who don’t want spend). Ultimately, most of the players feel the game is unfair and get "crowded out," thus making it hard to build a long-lasting community for free-to-play games.

There’s a lot in there, and it can be hard to tease apart. But it boils down to the following 4 claims:

If these were always true then, taken together, they would imply that multiplayer games which are strongly free-to-play don’t build long-lasting or large-scale communities.  Since that’s not true (there are free-to-play games with very strong monetization which measure user lifetimes in years), it’s worth examining these claims a little more closely and talking about how to use the free-to-play model effectively without destroying the gameplay.

Before we begin, it’s worth noting that the old saying that "Where’s there’s smoke there’s fire" applies here. 10 years ago, on the desktop, in the early days of free-to-play, pay-to-win was a huge problem (especially for MMORPG’s with strong communities. Games like Age of Wushu were often upbraided for being pay-to-win). But it’s much less of a problem today (and, in fact, incorporating a small amount of pay-to-win into your game is an established best practice).

This is, in general, true. Keeping in mind that the vast majority of players don’t spend at all in free-to-play games, it’s still the case that the likelihood of spending, and the likelihood of being a "VIP Spender" are higher when the player has significant disposable income (e.g. is wealthy).

In the absence of personalized or dynamic pricing, this also means that wealthy people generally buy more things than people with less disposable income. But also note that the app stores generally encourage charging different prices to different players (for example, Apple’s pricing tier system is nothing but a way to charge lower prices in less wealthy countries).

Spending More Gives People a Significant Advantage in the Game

This would  be a huge problem if true. It’s usually raised in the context of games where people compete directly with each other and there are items or power-ups that can give a player a competitive advantage (we’ll call these "competitive items" and buying them "competitive spend" below). For the game to be unfair, it must be the case that different players are competing, or at least comparing their experiences, and that spending helps them win.

But here’s the thing: while people do spend for competitive reasons, they usually taper off fairly quickly once they start winning. While every game is different, competitive spend often has the following pattern: 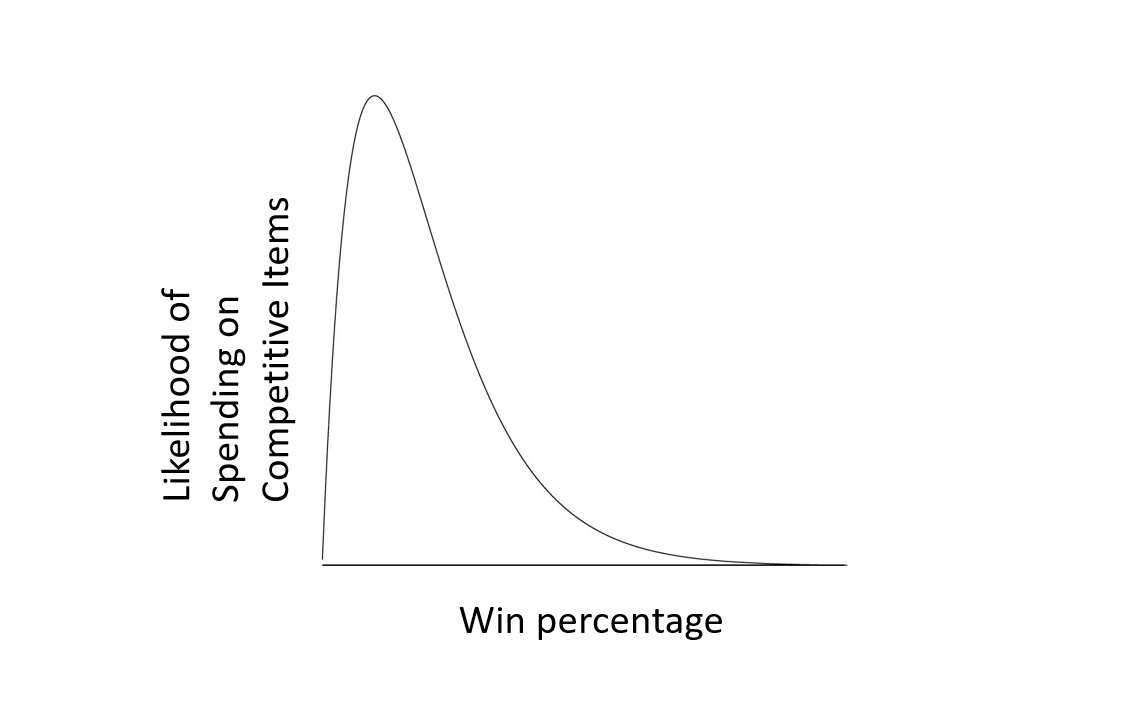 Or, in plain English:

Higher rates of in-app purchase revenue for competitive or gameplay items typically come from players with win percentages in the low to middle range, while players at higher win percentages have increasingly lower monetization rates. The most likely inference here is that less experienced players are spending more IAP in a (usually futile) attempt to gain an edge against talented veterans they’re going up against.

This doesn’t mean, however, that your game’s best players are free riders: In fact, they’re helping monetize it by giving others further incentive to keep playing in order to catch up with them (boosting retention), or buying high quality items/consumables that would otherwise require many hours of gameplay to earn (boosting revenue).

And it also corresponds completely with time-honored precepts of game design that have nothing to do with free-to-play design. Consider, for example, matchmaking (grouping players by skill, so that players play against similarly ranked players).  It turns out that effective matchmaking increases direct monetization dramatically.

The traditional argument for solid matchmaking is that it makes the game more interesting. It makes matches more competitive, which improves retention. And that is certainly true (and that improves monetization indirectly, since players who don’t play certainly aren’t spending).

But what’s the direct effect on monetization?

While this can be true in some games, it’s actually more of a failure of game design than an indictment of the overall free-to-play model.

Consider a modern PvP mobile strategy game like Clash Royale (note that Clash Royale is not a Scientific Revenue customer) which has the following characteristics:

How do players get better at Clash Royale? In order of importance, there are four basic mechanisms:

The key point is that three of the four ways to get better (and the most effective three ways) are free, or only cost you time. It’s entirely possible to be very good at Clash Royale without spending a dime. This effectively mitigates the "it’s a pay-to-win" complaint.

The other key point is that cultures change. In 2000, Amazon was forced to publicly apologize for engaging in price experimentation. In 2013, Profitero estimated that Amazon makes 2.5 million price changes every day, based on data and experimentation. What changed? Well, people got used to the idea that e-commerce vendors change prices and do experiments.

Similarly, as free-to-play has gained acceptance, so has the idea that you can either spend time or you can spend money, and that, as long as things aren’t too biased in favor of the spenders, it’s all part of the experience (you can see evidence of the change all around us-- even in hardcore Desktop MMO’s, the conversation has changed from "Pay to Win is Always Unconditionally Bad" to more nuanced discussions).

Drilling Down on Clash Royale a Little More

Clash Royale is a very successful game. It’s a mid-core, player versus player combat-oriented strategy game which monetizes highly via the free-to-play model and in which spending money does give you a competitive advantage.

That alone is very surprising and, as stated above, strongly indicates a sea change in gaming culture.

But it’s also worth pointing to another important cultural change, and how it changes monetization. That is, the presence of video replays / YouTube / "TV royale"

Obviously, replays build loyalty and engagement and enable players to learn the nuances of the game from experts. In fact, anecdotal evidence suggests that the typical Clash Royale player spends a little more than half their time watching videos or YouTubers like Molt.

Replays are also a strong, and important, monetization best practice. Here’s how it works in Clash Royale: 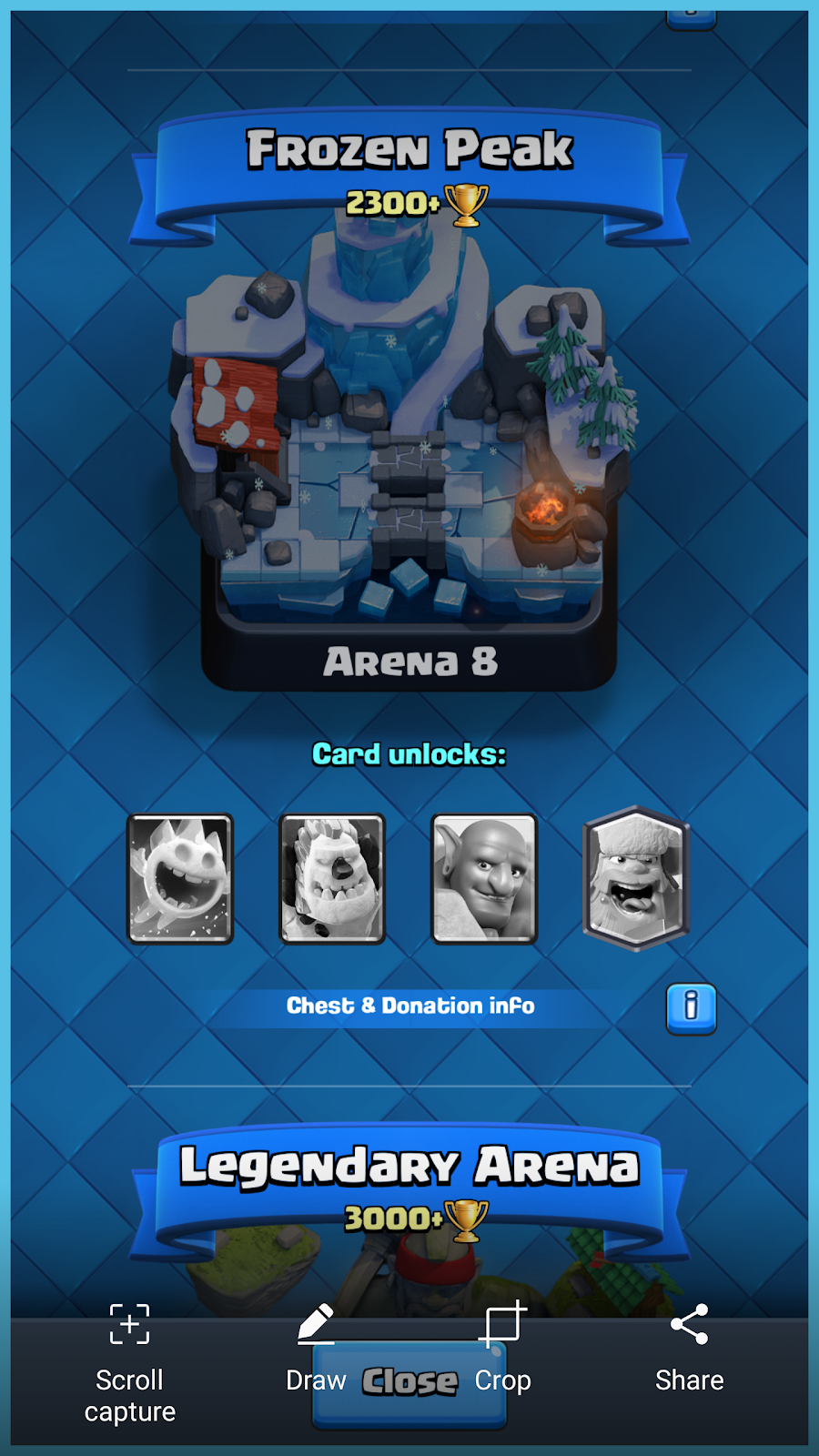 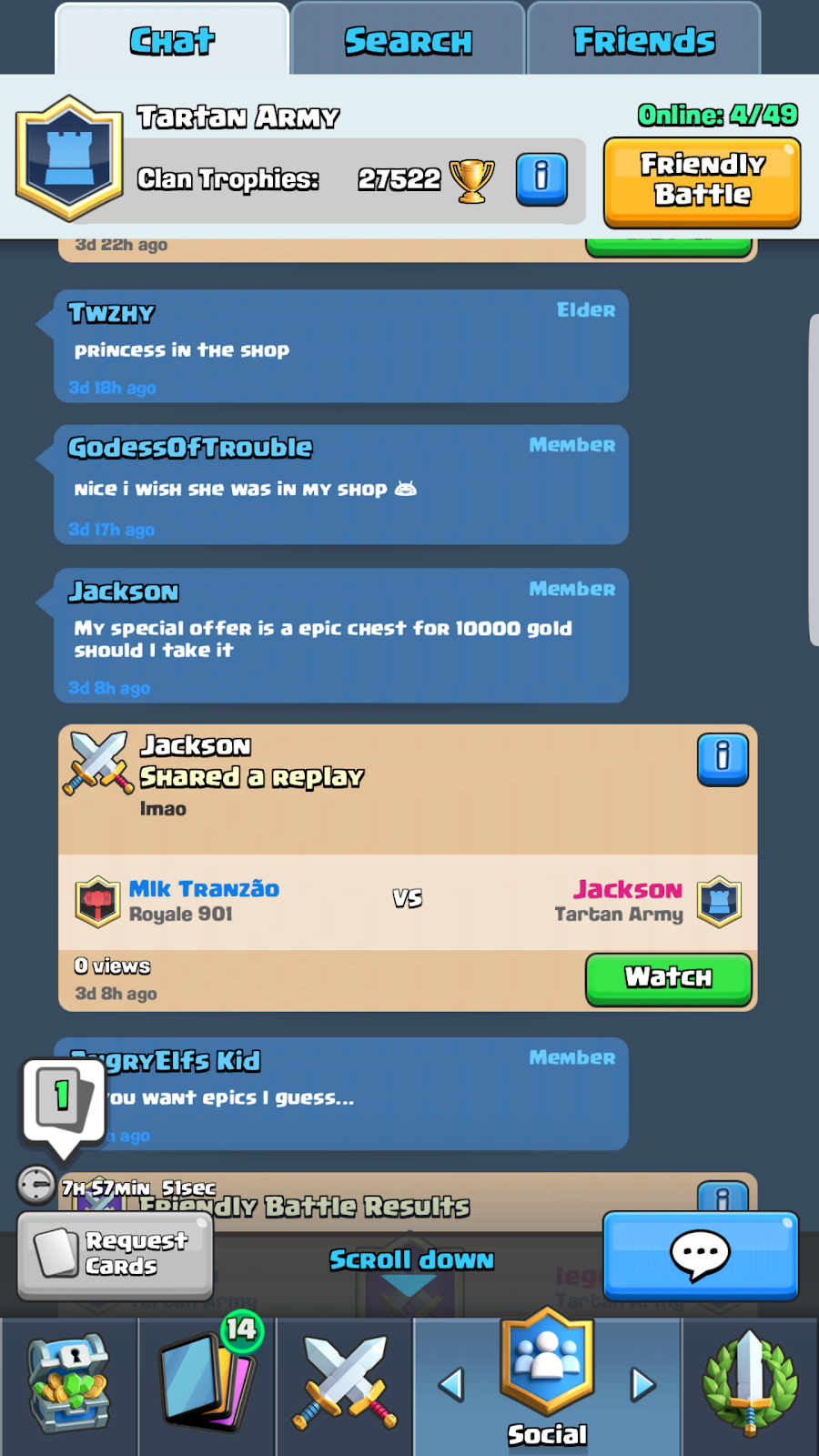 People talking about what’s in the shop.

The evidence is clear: while "play to win" was overdone in earlier generations of free-to-play games, and gamers reacted badly, the world has changed significantly and it’s time for game design (and gamer) biases to catch up.

Not only has culture changed, making free-to-play and pay-to-win practices more acceptable, but we’ve also learned a lot about how game design and game monetization interact, making it possible to create high monetization games that play naturally, don’t offend players, and don’t cause outrage in the community. Clash Royale is not alone, and there is a growing body of knowledge about monetization best practices that can directly impact your bottom line...