The CodeSpells Team launched its first Kickstarter campaign at the beginning of this month, and we learned a lot. With only 5 days remaining, we're excited to share what we learned with the Gamasutra community!
Lindsey Handley
Blogger
September 30, 2014

Back in June, our team of five was excited about launching a Kickstarter for our video game, CodeSpells. We had a plan for taking CodeSpells to the next level, but we didn’t know anything about running a Kickstarter campaign for a video game. We did a lot of research to prepare, primarily on Gamasutra, so we’re happy to give back to the Gamasutra community today! This is a lesson that we saw on pretty much every Kickstarter Post-mortem ever, so we tried to heed this advice. The more you can prepare ahead of time, the more time you can spend doing productive things when the Kickstarter actually launches, like answering backer questions and promoting the campaign! We spent 2 whole months preparing for the launch:

These preparations helped us raise $32K in the first 5 days of our campaign! This put us well past halfway to our funding goal of $50K. Although a lot of this initial funding came from friends, family, and the mailing list, we were also very lucky that John Walker at Rock, Paper, Shotgun featured our Kickstarter on launch day and sent people our way early on.

Only four days into the Kickstarter campaign and we were already losing momentum! We knew we needed more coverage, but we couldn’t get any of the major media sites to return our messages. (Pretty much the most frustrating feeling in the world.)

A writer from Player Theory, a small blog that covers video game news, interviewed us, but we didn’t expect too much to come of it. A day after the interview was posted, we noticed a huge pick-up in our funding from a very unusual source: imgur.com. We soon figured out that the writer at Player Theory had posted images and gifs of our video game, and the album had spontaneously gone viral. Imgur users donated $17K to the campaign over a 3 day period (Sept. 8-11)! 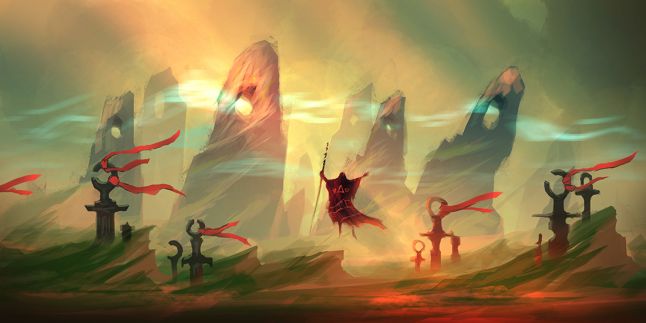 We never would have expected imgur.com to be a place to promote a video game Kickstarter, but we would highly recommend future Kickstarter campaigns to try promoting their video games to the Imgur crowd. Concept art & some cool gifs will go a long way.

After another long slump, a friend suggested we post a Thank You album on Imgur to tell all the Imgur users thanks for giving our campaign such a boost. We made infographics showing the huge difference Imgur users made in our campaign. We asked our backers and friends on Facebook to upvote this album, and, as soon as we had 300 upvotes, this album went viral too! The two CodeSpells albums posted on Imgur have received over 880K views and over 18K upvotes between them. 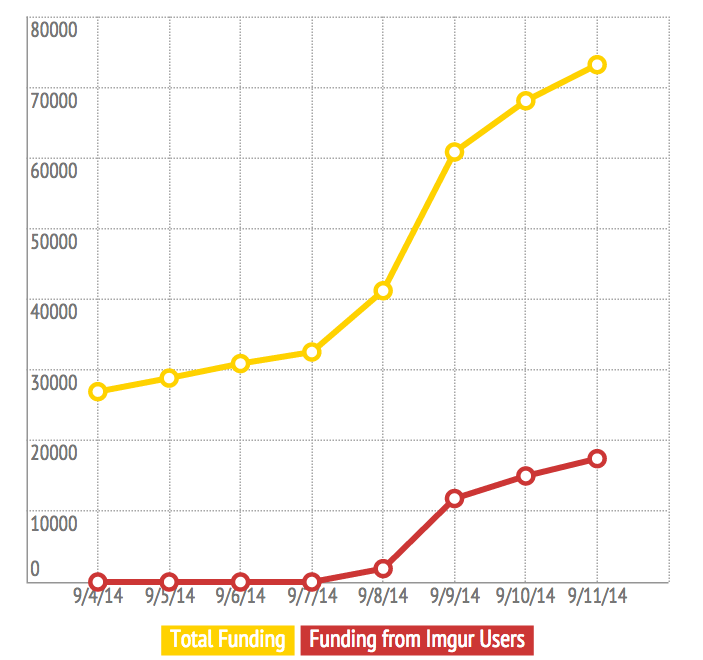 Immediately after the imgur-bump, we added some cool in-game item rewards to the higher tiers, attempting to coax current backers to pledge just a little bit more to our campaign (we made it very clear this was our intention). Although this was generally very successful and most backers responded positively to the pick-up in funding, it backfired somewhat and unexpectedly angered some of initial backers who felt the discounted “Early Bird” tier backers should also receive the staffs. Although the new in-game rewards generated a lot of funding, I wish we had planned this a little better. We lost several upset backers in the mix. In general, campaigns should try to make sure Early Bird discounted tiers (our $10 tier) receive the same rewards as an identical non-discounted tier (our $15 tier). 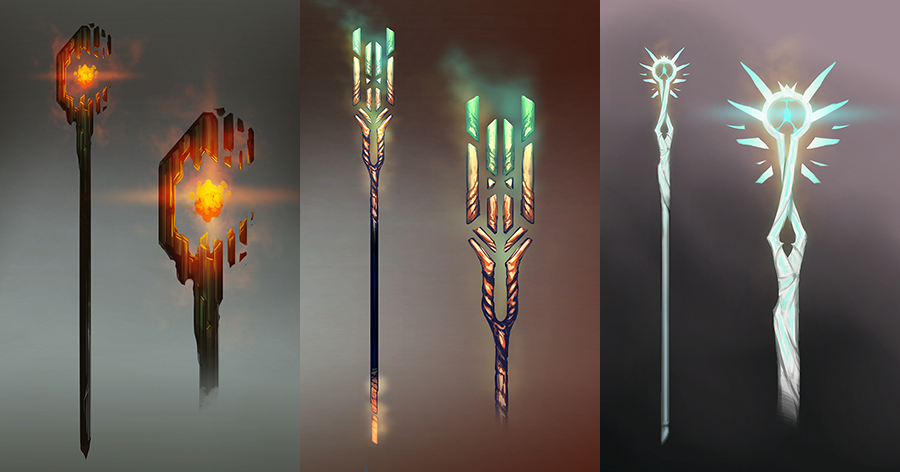 We thought this was a long-shot, but with the success of Imgur, why not try promoting our Kickstarter on 9gag? We tried to make a 9gag submission based on the meme that many of our supporters had been throwing at us: “Shut up and take my money”. The submission we made was not particularly funny, but we gave it a shot anyway.

We asked friends and backers to upvote our 9gag submission, but the submission got stalled out that day at 85 upvotes. We thought it was a lost cause, until two days later (Sept. 26th), when the image randomly went viral, hitting the “Hot” page on 9gag.com. One issue with 9gag is that it’s not easy to embed a link in a 9gag submission without it feeling like an advertisement - and advertisements don't usually go viral. Luckily, the comment on our submission that was upvoted the most informed readers that the submission referred to CodeSpells which was currently on Kickstarter. Immediately, our website (the #1 search result for “CodeSpells”) received a huge influx of traffic. Although our funding did pick-up above normal, 9gag did not bring as many backers to our Kickstarter as Imgur did. 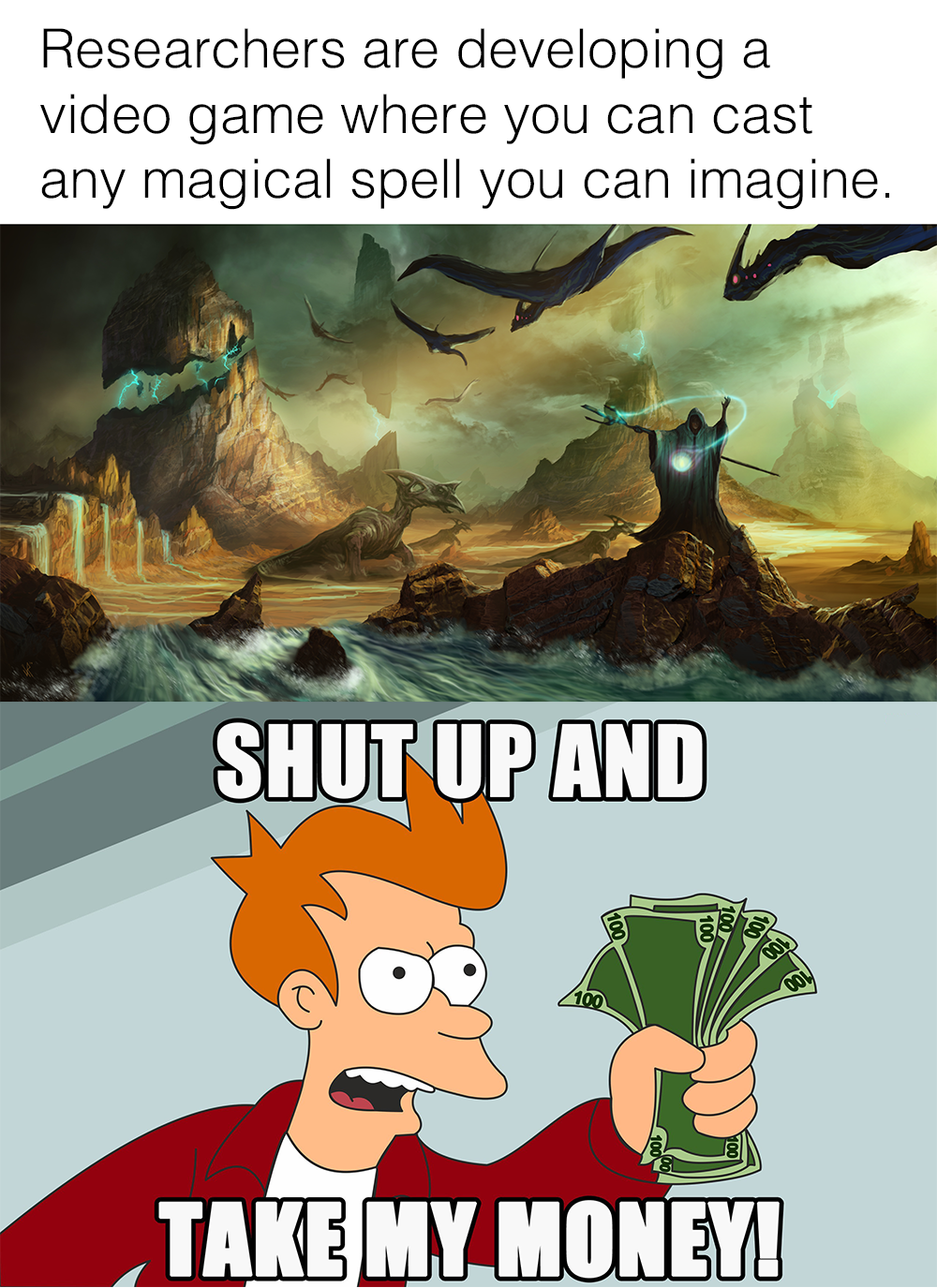 Your Kickstarter backers are your biggest asset. If you keep up a dialogue with them throughout your campaign, they will promote your campaign to their friends and family, and they will back you up if anyone criticizes your campaign. Communicating with backers (and potential backers) has taken up the majority of my time during our Kickstarter campaign, but it’s been worth it. We’ve been answering questions & comments over Twitter, Youtube, Kickstarter, Facebook, and our website. Make sure you have a team member who can dedicate the majority of their days to this. CodeSpells backers consistently help promote our campaign by sharing our content over social media, and our backers have repeatedly thanked us for being so communicative with them.

Other Relevant Data from Our Campaign:

Run a Steam Greenlight Campaign along with your Kickstarter:

We launched a Steam Greenlight campaign the day after our Kickstarter launched. We were Greenlit only 9 days into our Kickstarter campaign, but being Greenlit did not appear to give us a big funding boost (although it was big boost of excitement to current backers). 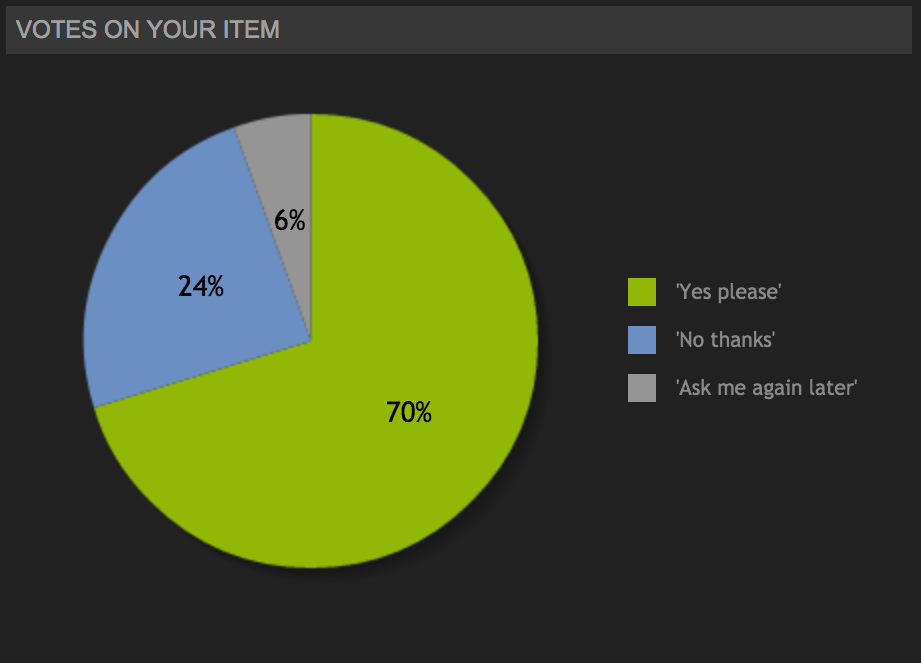 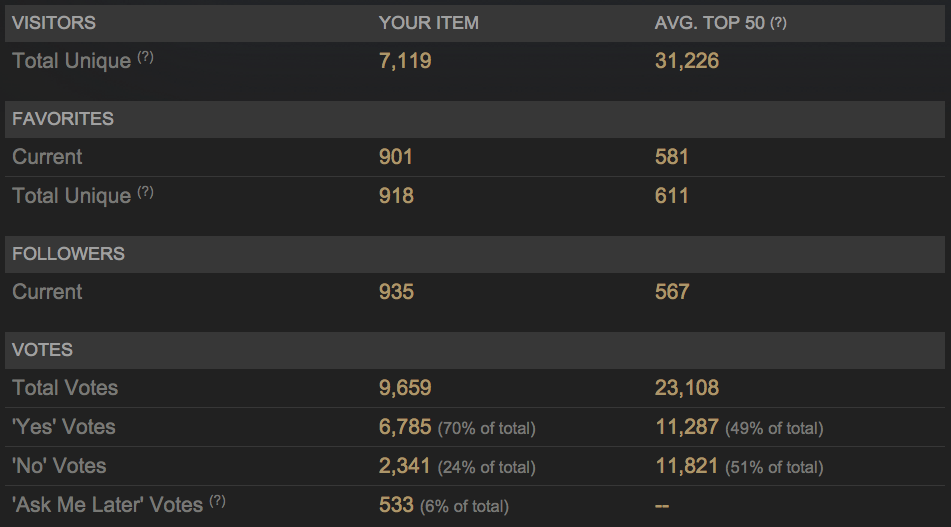 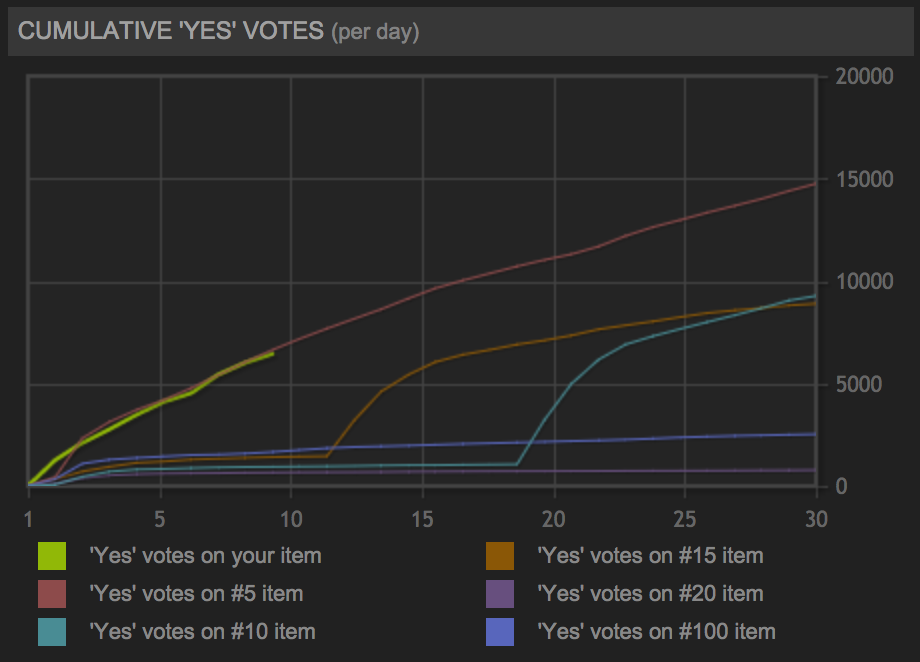 Keep Track of Your Referrers Over Time:

On any particular day, Kickstarter shows you how much funding each referrer has sent your way, but it doesn’t save that information for you from day to day. I would recommend campaign managers save this info yourself in a spreadsheet! I didn't realize this until later on, but now this data has been helpful for us to see what promotions are working and for how long. In the graph below, I've charted the funding from each of our largest referrers over time: 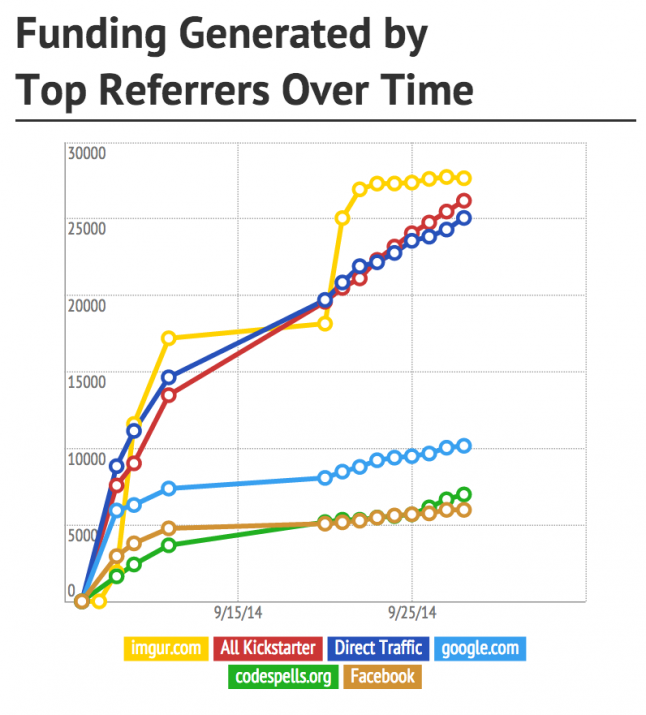 Here is a current snapshot of our funding from each Referrer here: 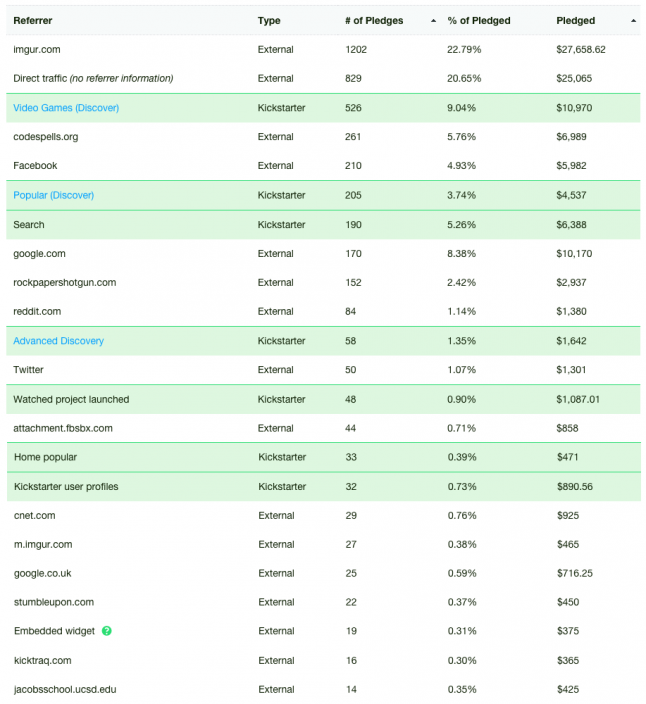 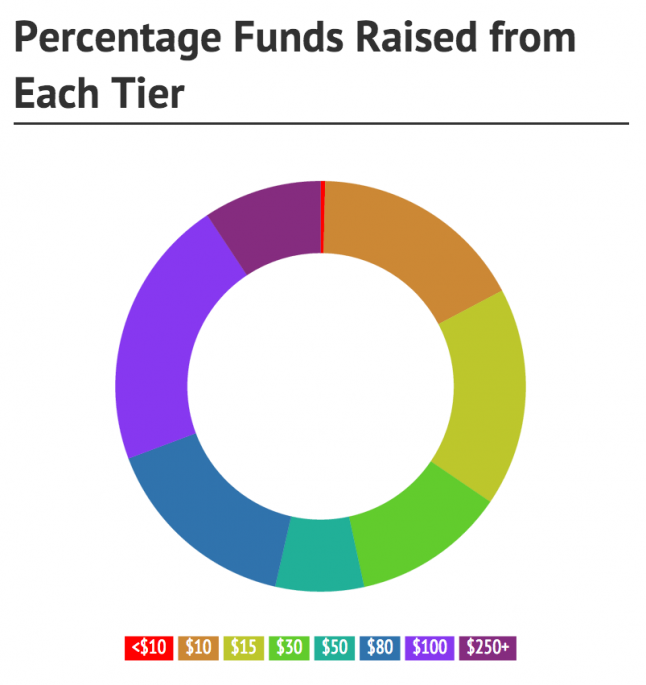 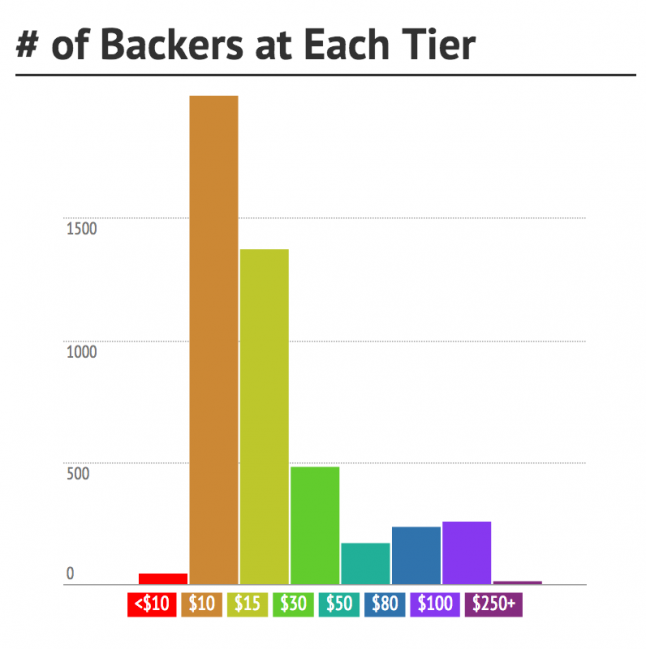