Koei Tecmo doubles down on making games with other peoples' property

The house of Dynasty Warriors sees enough value in collaborating on games with others' IPs that it has opened a whole new division and is working on a new project with a 'big Western IP.'
Alex Wawro
Blogger
November 02, 2015

Japanese game company Koei Tecmo posted its half-year financials last week, and while both profit and revenue were down the firm believes it will have a better-than-expected fiscal year thanks (in part) to the strong sales performance of licensed games.

For the first six months of the fiscal year ending March 2016, Koei Tecmo reportedly reaped 2.47 billion yen (~$20.45 million USD) in profit -- roughly 25 percent less than it saw during the same period a year prior. However, that's more than many analysts expected it to earn, and the company forecasts it will close its fiscal year with a 10 billion yen (~$82.78 million USD) profit.

A notable portion of that stems from its "collaboration titles", like Dragon Quest Heroes and Hyrule Warriors (pictured), which see Koei Tecmo developers collaborating with other studios and branding their work with popular licenses.

An analyst who operates under the moniker "ZhugeEX" notes that Koei Tecmo has recently opened an entire division dedicated to developing such collaborative projects, including games based on the Attack on Titan anime, the Dissidia Final Fantasy game and a yet-unannounced collaboration with a "very big Western IP."

For more details on where Koei Tecmo is at check out ZhugeEX's blog post on the subject, which offers much deeper analysis of the company's latest investor briefing (sample slide posted below) as well as selected comments CEO Yoichi Erikawa made at a public event about the firm's intent to sharpen its focus on mobile game development, VR game development and projects "which would satisfy seniors in their 50s and 60s." 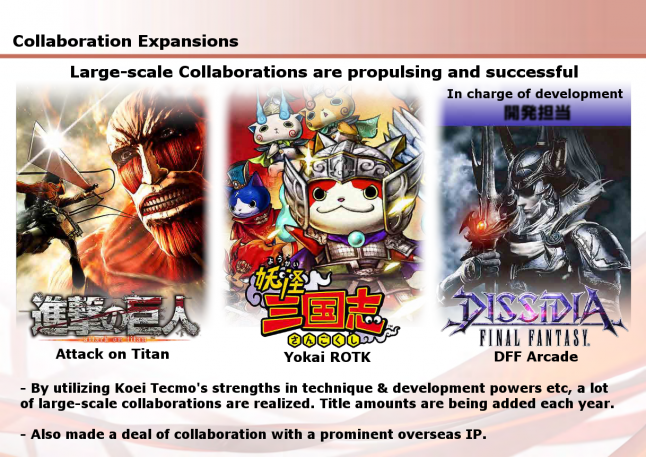