Kickstarters pop up every day, some are a success while others slowly fizzle out of existence. As part of my kickstarter I am keeping a day by day journal, documenting everything I learn and every dumb idea I come up with. Wish me luck!
Arran Langmead
Blogger
August 12, 2014

Another day and my efforts to entice the lets players are not going well. I got 1 response out of the 100 messages I sent out yesterday. So to you, LetsplayPoRusski, the first (and possibly only) lets player who has responded thank you. To be fair to get a response within 24 hours is good. The problem with the connected society is that everyone thinks 24 hours is a long time and when you are doing a kickstarter it feels like a year. I need to relax and not freak out every time someone doesn't respond straight away.

Today was spent filming four player gameplay of Bears. Between finding three people to play with me I also started putting together a press kit (something I should have done ages ago, I know. I am not a marketing person). In preparation for my spamming of the press in the vain hope that that someone will pay attention to me.

Now for the embarrassing part of today's journal entry. After filming the gameplay footage I needed to do the piece to camera. In a moment of insanity I decided it would be funny to do a skit in a Bear costume. I regained my sanity after doing a take of the least funny and kind of creepy kickstarter video. I don’t know if you have ever done a monologue to camera in a cheap bear onesie before but it really does help you realise what is funny, and what is really, really not. 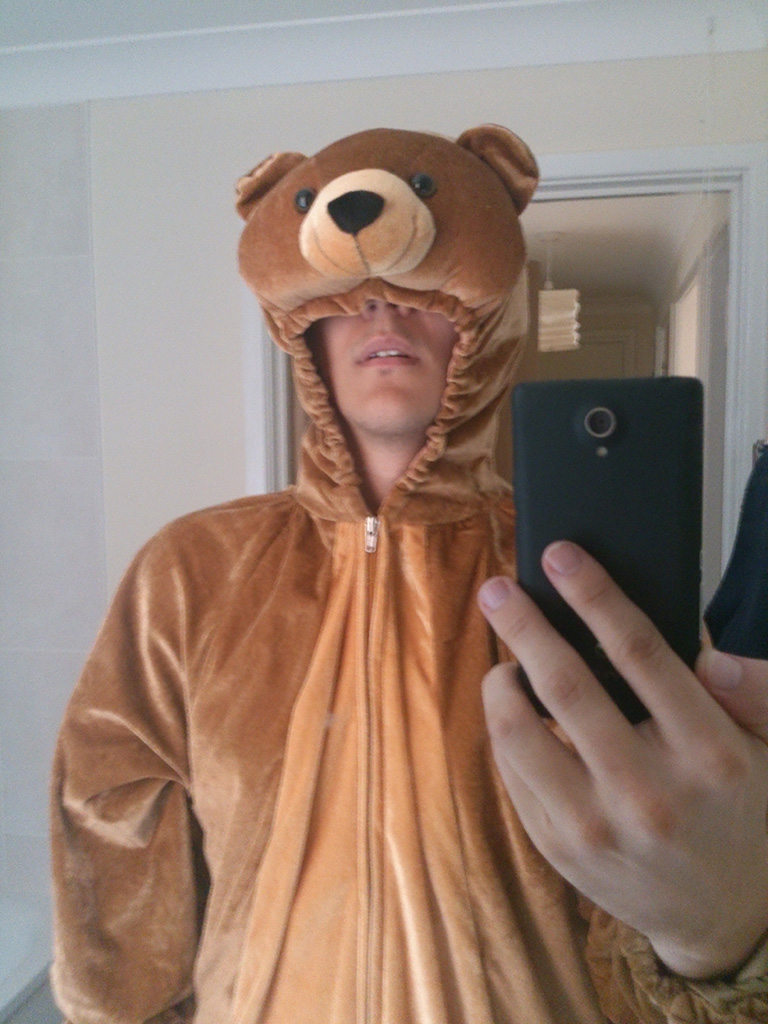 So I shot a new monologue, a straight piece to camera. While I consider myself to have a good sense of humour I didn’t trust myself after the bear outfit. I may never do so again.

Its getting close to deadline and I still have a lot to do. I am aiming to have my video edited and ready by tomorrow night. Then I can concentrate on sending out more emails. I found a website called Pixel Prospector which is an absolute (as the website states) gold mine. It has links to loads of indie game reviewers and other really useful links and tips.

There are several articles that reference Ethan Mollick’s work on social numbers and the success of kickstarter that states having 1000 friends or more on facebook gives you a big enough circle to create a kind of ripple when you post something about your kickstarter. It seemed like a clinical way to talk about a social group of people you call friends but I guess thats how facebook is going anyway, or has already gone.

I have been talking to OUYA, one of the platform holders that the game is going on and they have already been really helpful (one of them is editing my kickstarter page for me as I am writing). They are even showing off Bears at PAX for me!

Talking to a console manufacturer has been really useful. They have greater resources than little old indie me and the guys at OUYA are really enthusiastic. Applying for things like indiecade or PAX seem like a great idea to get some publicity for a kickstarter. It even gave me another completely unique and clever idea to print off a load of business card sized promo’s that have info about Bears and a QR code to the kickstarter. (I used MOO for anyone that is interested)

Finally did a round of emails at the end of the day to 10 indie game review sites. Its a lot easier to find contact details for these guys than it is for the lets players. Most of the sites I visited had a contact section.

I feel like an ass when I email reviewers and lets players. Contacting so many people with the same question makes me feel like a game review prostitute. It feels so one sided as well. “Hey you reviewer, look at my game and give me attention! But I’m also going to ask everyone other reviewer as well. I’m also going to go round talking to all the competition asking exactly the same thing!”

I don’t know, is there an etiquette to this sort of thing? The guilt gets even higher because allot of the sites I don’t even visit. What right do I have to contact these people when I’m not even one of their patrons. This also got me thinking, how do lets players want to be contacted? Does sending them a youtube message even work? There is a great site which lists loads of let's players and its been really interesting going through it. Most have a unique way of doing things. Some only do specific games or console types. Lots of minecraft or Nintendo only pages. Some refuse to take requests and others welcome it. Also when a lets player has a business email, is that for developers to use? or is that for advertisers? I need to find someone that can answer all these questions.

Anyway thats Day -03 over, Thanks for reading and talk to you tomorrow.