Is your game able to sell well even if despised by critics?

In this blog post I would like to analyze our first game despised by critics, but appreciated by many fans still today.
Fabio Ferrara
Blogger
June 15, 2020

Hello my friends!
In this blog post I would like to analyze our first game, since I think could be an interesting read for the new game developers who are approaching to this world.

We developed our first full game “Woodle Tree Adventures” in 2013 (using the engine Unity3D), even though we were totally beginners we decided to try anyway and see what kind of game we would be able to develop.
The game is now available on all platforms (Nintendo Switch, Steam, Xbox One and PS4)

Link to the game (Switch): https://store.steampowered.com/app/299460/Woodle_Tree_Adventures/

Even though we were pretty satisfied of our game, the critics judged us very negatively, and this image is surely enough to show you what I mean:

A 28 on Metacritic is a score that could destroy your career (and can knock you down), but overall even if not perfect, the game sold hundreds of thousands of copies and a lot of gamers appreciated playing it.
As an example here are some few images that can show you the appreciation of our fans:

That said, I’m not insinuating that you have to ignore the critics and reviewers. You surely have to listen to them, and this is what we did for the sequel of the game Woodle Tree 2: Deluxe;
We took as lesson every little feedback that we gained from reviewers and tried to make something unique, this helped us infact to reach a 71 on Metacritic: https://www.metacritic.com/game/xbox-one/woodle-tree-2-deluxe+ 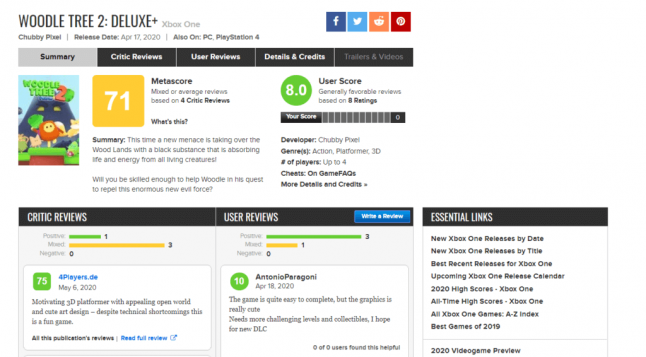 (Now available on all platforms too): https://www.nintendo.com/games/detail/woodle-tree-2-deluxe-switch/

During this time anyway I always wondered why the first game was so much appreciated by players but not by critics (I still receive messages everyday from fans saying that they loved Woodle Tree Adventures).

Probably the fact is that the game is very simple and many players like simplicity and even though has bugs here and there, many players ignored them after a while.

Or could be the fact that being our first game and having many defects, many gamers were able to understand this while playing and even have fun thanks to this fact.

Anyway what I wanted to tell you if you’re starting just now developing games is to not take critics to your game as something personal: try to take them for what they are (just opinions about your game and not about you) and learn from these.
It’s not easy for developers to be able to judge their own game objectively after years of work, but it’s surely something that I think needs to be done.

Thankfully there are many gamers like these that surely will cheer you up and make you understand that your work was worth it:

If you want to check our games, you can visit our official website! https://chubbypixel.com