If you must use runes...

About using runes in games correctly and the importance of research.
Jonas Nicolaisen
Blogger
October 28, 2014

Don't just write "ASDFGHJKL" in some Windows rune font onto stuff in your game. 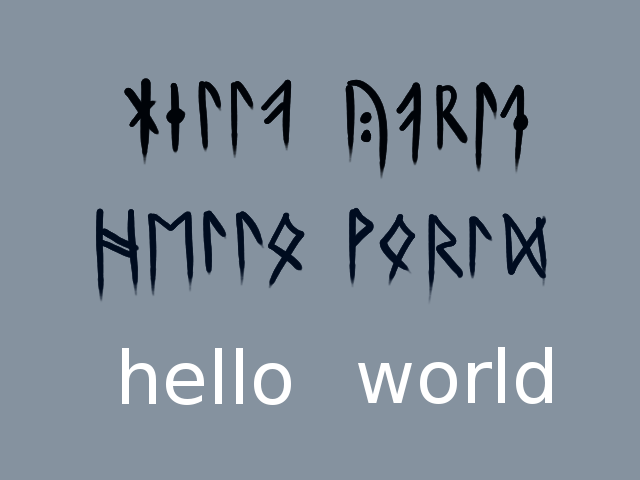 Runes are a historical alphabet. You might be writing something ridiculous in runes without noticing it if you don't pay a minimal amount of attention. So go the extra mile, look at the runic alphabets on Wikipedia, make a cheat sheet for yourself, and be sure what you write. Don't be a cheapskate.

It is a shame that Western game developers don't respect history. What's more, they treat it like a candy store they can freely rob from and just arrange the stuff until it looks good.

That is a bad approach. Every time I see random runes or Vikings with horned helmets in some game, I get annoyed. They are trying to sell me a shoddy product. They didn't even do their basic research. They apparently assume I am some stupid twelve year old who just wants to lob some heads off. I am 40. I have broad interests. I have an education. I want these game devs to do their damn research or I won't feel incited to buy those games. There is not a single Viking game that is actually good AND has done its research. Just like with movies.

Anyway, both the runic lines above say "hello world". The upper is in dotted Danish or medieval runes (the dots were added to denote that a U should be understood to mean a V or a W, as the language developed.) The lower one is in the older common germanic runes. Those have no dots and no weird dual meanings. They also look sharp, so they are well suited for use by artists in games. Elder Futhark is what you probably want to google.

We cannot go on to make games with this laissez-faire approach to proper research if we want to attract a more mature audience who probably also is better educated. We need to up our game and do the extra research. The information is not hard to find these days.

ArtDesign
Get daily news, dev blogs, and stories from Game Developer straight to your inbox
Subscribe