Humble is giving its monthly game subscription plan Humble Monthly a fresh coat of paint, and a new tiered approach that removes the mystery from the service.
Alissa McAloon
Editor-in-Chief
October 18, 2019

Moving forward, what was once Humble Monthly will soon be known as Humble Choice and give its subscribers the ability to choose which games they’ll receive every month, a departure for the blind box method employed by Humble Monthly.

On top of that, the new spin offers three different tiers its subscribers can pick between, ranging in price from $4.99 to $19.99 per month, though current Humble Monthly subscribers have the option to keep their current $12 monthly fee as long as their subscription doesn’t lapse before Choice launches, or at any point in the future.

The Classic plan notably offers the best price and perk package of the pack, something Humble is seemingly using to try and entice new subscribers ahead of the changeover, or keep Monthly subscribers from jumping ship.

Humble Choice’s actual launch date is a bit up in the air right now. Humble says that it hopes to launch Choice in 2019, which gives it just over two months to make the switch, but nothing concrete has been announced.

The overhaul falls a little over three years after Humble Monthly first launched as a service that offered its subscribers a handful of mystery games each month in exchange for that recurring fee. The service later expanded to coexist with the company’s Humble Original initiative, and expanded further in 2017 to include the then-new subscription library Humble Trove.

Choice offers its members a bit more control over the games they keep than Monthly did, but keeps access to both Humble Trove and Original games as part of the deal. The lowest price tier, however, drops the ability to keep games completely and instead focuses mostly on allowing access to Trove. 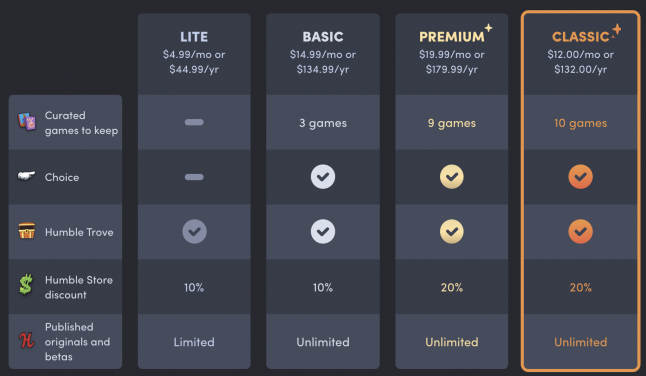