How Switch's success is impacting devs in the game porting biz

To suss out how the Switch has shaped the business of porting games, Gamasutra speaks to "port house" devs to gauge their feelings on the Switch -- and how long they think the boom will last.
Kris Graft
Publisher
February 21, 2018

The launch of the Switch was like a pipe bomb going off in the lap of the industry, disrupting the longstanding barrier between home console and handheld, between mobile and fixed platforms, and clearly demonstrating the powerful appeal of successfully blending toy and game machine.

It wasn’t just the way we travel with games, though. The Switch similarly disrupted the near monopoly on indies that Steam has held for the last decade or more, an iron grip loosened only slightly by Microsoft and Sony’s forays into the space.

But unlike the other platform holder’s cautious, gradual infiltration of the independent market, Nintendo came crashing in all at once, and proved its viability as a platform for indies with strong initial sales and an open, sparsely populated sales front.

A nearly instantaneous side effect was a rush of independent devs (and, to a lesser extent, some triple-A houses) looking to get their games ported over to the new console.

To get a sense of just how big this stampede was and how the Switch was affecting the business of porting games, we reached out to a number of "port houses" -- studios which focus on helping other devs bring their games to new platforms. But before we dove into the impact of the Switch, we wanted to get a sense of how business was generally for developers specializing in moving titles from one platform to another.

The state of the port industry

The overwhelming sense we got from informal conversations as well as during these interviews is that, for port houses, business is booming.

"You know that meme? With the dog? Drinking from a sprinkler? That’s me right now."

“You know that meme? With the dog? Drinking from a sprinkler? That’s me right now," says Adam Creighton, director of development at Panic Button. For him, the volume of work is almost overwhelming. His studio handled the Doom and Rocket League Switch ports, and is currently hard at work on bringing another id property, Wolfenstein II: The New Colossus, to Nintendo’s console. And he hints it’s just the tip of the iceberg.

“And we might have some other titles for that platform, and maybe some other games for other platforms, in the works,” Creighton tells me. “In terms of volume, I’m in this amazing place where as a studio we get to choose how we want to grow, and with whom, and with what projects. My biggest challenge lately is not which projects do we pick to retarget to other platforms, but managing the other parts of our portfolio, picking the different projects that are exciting to different people in the studio, and being responsible about what I want to work on, versus what is best for the studio.” 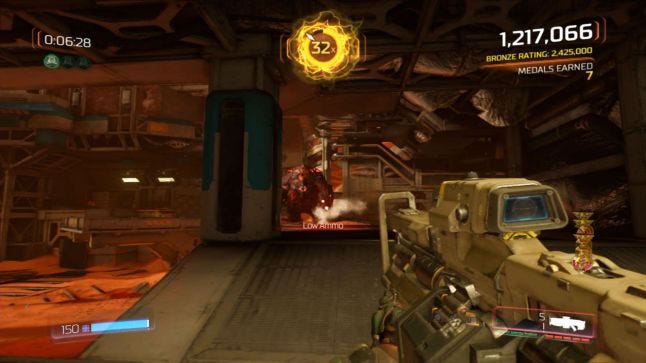 Doom (2016) ported and running on the Nintendo Switch

Tony Cabello, CEO of BlitWorks (the studio behind ports of notable indie hits like Fez, Spelunky, and Bastion), says they’ve also seen a huge spike in port work, in large part due to Nintendo’s noisy entrance into the market.

“We’ve recently experienced a big increase in the amount of work,” Cabello says. “Even though we’re always very busy, we’re now working on more projects at the same time, especially indie games which are our speciality. This is mainly because nowadays, indie studios see that publishing their games on consoles is a possibility, that was not so easy to do in the past because the access to the market was more restrictive. So we now have more developers reaching out to us to get there.”

Cabello emphasizes that consoles slowly opening their arms to indies, particularly on the Switch, means cross-platform publishing is more enticing than ever. “It’s a good time to be a port house, everyone wants to have their game published in every available platform, and even though many developers don’t know they need a porting service they end up realising it requires a whole different skill set.”

Ted Staloch, the executive VP of publishing at Aspyr, echoes those sentiments. His studio, one of the most prolific Mac publishers in the world, is also responsible for a number of complex mobile ports, from BioWare titles like Knights of the Old Republic and Jade Empire to sprawling strategy titles like Civilization VI.

“With so many powerful, capable devices, there is simply more opportunity for brands today than what our partners typically have resources or expertise to fulfill,” Staloch explained. “It’s a need Aspyr is very happy to fill, as gamers have demonstrated they don’t want their favorite games tethered to only one device.”

It’s not just the Switch that’s responsible for this recent bump, though; Staloch says the expanding power and flexibility of mobile platforms has also been a huge boon for the port business. “As the tech improves on mobile devices especially, we see tremendous opportunity for every great game to thrive,” though that also means an increase in pressure to perform as heavy hitters like Activision and Disney come to studios like Aspyr to shepherd their games to new homes.

The impact of the Switch

While it’s clearly not the only factor, it’s hard to overestimate the effect the Switch has had.

For Staloch and Aspyr, “the Switch has been an incredible story from the very beginning. Aside from our partner products in development, we just published our first independent game on the platform, InnerSpace, and will release Next Up Hero on Switch later this spring. The way Nintendo has embraced third-party and indie developers has been incredible, and there’s no question the Nindies have been instrumental to the console’s huge success.” 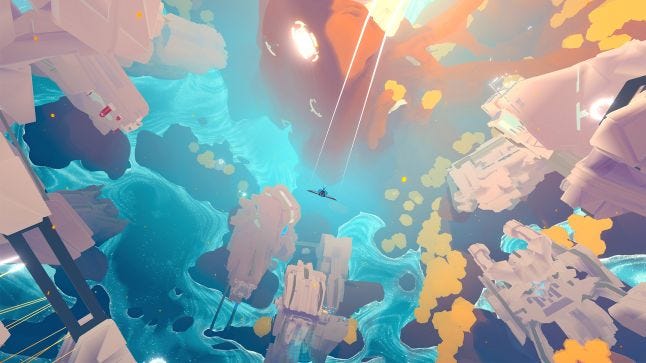 Creighton agrees. The Switch has launched Panic Button to a new tier of success and recognition, with all the perks (and revenue) that entails.

"In the games we have published we’ve seen more sales on Switch than on PS4 and Xbox One combined during the same period. Now every developer wants their game to be on the Switch."

“The Switch release has been perfect. Actually it’s mentioned in almost all the port requests we receive," adds Blitworks' Cabello. "To keep up with this pace, we already have 12 kits at the office! Not yet the platform with the most kits, but definitely the fastest growing trend in our office. In the games we have published we’ve seen more sales on Switch than on PS4 and XBox One combined during the same period. Now every developer wants their game to be on the Switch.”

Just the announcement of a new Nintendo machine was enough to put events into motion. Cabello says the Switch was getting heat well ahead of launch.

“We knew it was going to be big when people started requesting ports for the Switch way back before last summer,” he says, describing what sounds like a rising fever at the Blitworks offices. “Since then, it’s been crazy.”

It’s a word we heard a lot during these interviews.  The overall impression you get is of an industry experiencing a massive boom, and some nervousness around the edges that it’s a bubble, one that will inevitably burst. But as Creighton says, “Panic Button is getting recognition for what we’re able to do on that hardware, and other platforms – current and expected – and it just makes things crazy. Good crazy, but crazy. Is it sustainable? Sure. To a degree games are now commodities, and quality games that can break though the discoverability problem are going to find an audience.”

Nintendo as keyholders and curators

As you might expect during an era of mutual prosperity, most of the port houses we spoke to had largely positive things to say about their partners at Nintendo, a sentiment that was not nearly so universal when the Wii U was Nintendo’s flagship.

"At the beginning getting the hardware was a little bit difficult...the bureaucracy is always there and is sometimes frustrating. The time they take to approve a build (even if it’s a small patch) or the reasons why some builds are rejected can be a bit difficult to understand."

“Nintendo is a fantastic partner and we are completely aligned,” Staloch affirmed. “If you look at any first-party Nintendo game, it’s clear they know how to wring out every last bit of processing and performance on the Switch. Nintendo is very supportive of new ideas regarding control scheme and game flow, and has helped us especially with platform engineering and increasing performance on the Switch.”

The picture you come away with is a Nintendo that’s more open to working with and eager to provide technical assistance to its third party partners. It’s an approachability not only reflected in their business partnerships in the Switch era, but also in their tools.

“Regarding the development, compared to the Wii U, the Switch is a big leap forward,” Cabello says. “Much better tools, more affordable kits. The Wii U was lagging quite far behind the competition, but with the Switch it’s at the same level if not better for some projects. In terms of hardware capabilities it has a really nice balance for a portable, much less restrictive than a Vita for instance.”

But it hasn’t all been smooth sailing dealing with a monolithic company like Nintendo. Even this friendlier version of what has historically been a fairly insular company still has it’s burrs, particularly in terms of logistics.

“At the beginning getting the hardware was a little bit difficult, it took time,” Cabello admits. “the bureaucracy is always there and is sometimes frustrating. The time they take to approve a build (even if it’s a small patch) or the reasons why some builds are rejected can be a bit difficult to understand, but you manage to sort all that out, and you learn for the next port.”

But things have improved apace with the Switch’s success. “Now that has changed and you can get a kit quite fast. Nintendo is always very supportive, they’re there to answer questions during the development and publishing process.”

It’s easier for a company riding a wave of success to be open and supportive, of course, but it’s also the kind of behavior that encourages future prosperity, a lesson Nintendo seems to have taken to heart.

“Nintendo is all about good content on their hardware, and they work hard to enable that,” Creighton said. “They are receptive to and supportive of quality content, whether it’s theirs, something new that is not theirs, or a retarget or remaster that can find a whole new audience on their hardware. I feel taken care of and respected and collaborated with as a developer and a studio owner.”