How many wishlists should you have when launching on Steam?

I recently asked developers to share their Steam wishlist-related data because I wanted to know the relationship between wishlists at launch and sales at launch. Here's what I found out.
Jake Birkett
Blogger
April 25, 2018

Well of course the answer is: As many as possible!

I recently spoke to a bunch of devs and asked them to share their wishlist-related data because I wanted to know the relationship between wishlists at launch and sales at launch. I figured that this would help me to calculate the approximate amount of wishlists required at launch for a “decent” launch. 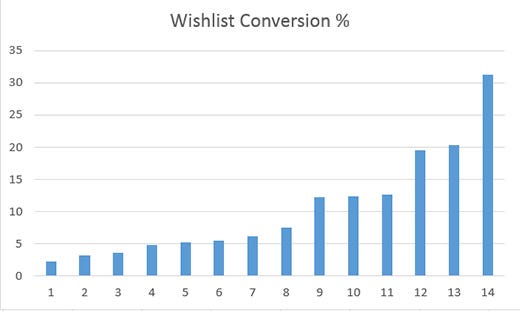 Y axis is exactly what the title says it is. X axis is just anonymized game number. This applies to all graphs in this blog.

On the Steam sales reporting system you can view a page of details about your game’s wishlists. If you set the date range to a week (or eight days to be safe) that encompasses your launch day, you will see a small table at the bottom of the page. That table shows you how many wishlist emails were sent out at launch and how well those wishlists converted into sales during the first seven days. I asked devs to send me their data and they kindly obliged.

Note that if you launched without setting up a “coming soon” page, this table will be missing. Also if your game is more than a couple of years old, the data isn’t available.

I’ve plotted the results from 14 games that had regular or early access Steam launches and the results are at the top of the page. You can see that there’s quite a large range. The average is 10.5% and the median is about 6.9%. Yes, I could do with more data points, so please let me know yours if you feel inclined!

Note that the highest conversion may be an outlier because the dev already had a huge player base for on online game and he encouraged them to wishlist the Steam game. So this may have resulted in a large fanbase buying during the first week.

Note that our game, Shadowhand, converted at 20% which is also pretty high. We also have a decent fan base from previous games and so did the other game on the chart with 19.5%.

If I exclude the possible outlier at the top then the average is 8.9% and the median is 6.2%.

Some games seemed to have a low conversion rate. Perhaps there were n’t many existing fans, or the price was too high, or the initial reviews were n’t positive. All those things and more could affect conversion rate. 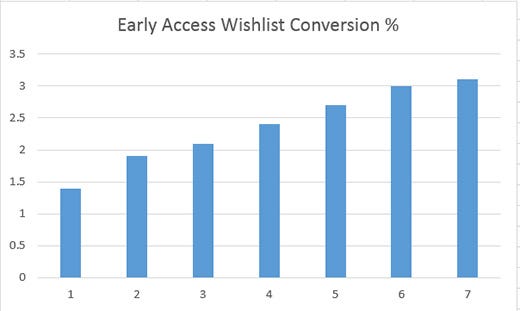 What about games coming out of early access (EA) into a full launch?

Well I managed to get seven data points for those and I discovered that the seven-day conversion rate is much lower than for EA or regular launches. The average and median are both 2.4%.

This suggests that most “fans” (I’m using this term to mean customers who are prepared to pay close to full price for a game that they really like the look of) have already bought the game and the others are just hanging on for a deep discount. Also I suspect that the length of time a game is in EA may affect the conversion rate because if it’s in EA a long time then probably more fans will get round to buying it, thus lowering the conversion rate at full launch. 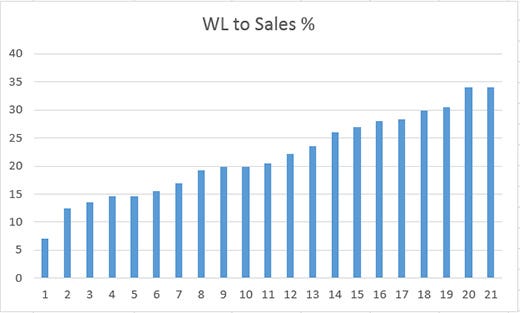 So how many ADDITIONAL sales will a game make during launch week on top of wishlist sales? Well I asked devs that too and charted the results above as a ratio of wishlists sales to total sales. This chart includes regular and EA launches, as well as EA to full launches because there was virtually no difference between them.

Many things could affect this ratio. For example, a large fanbase who have already wishlisted the game would push it up resulting in comparatively less organic sales. Or the game could get some great launch press/streamers or a Steam main capsule feature which would lower the ratio due to all the extra organic sales. 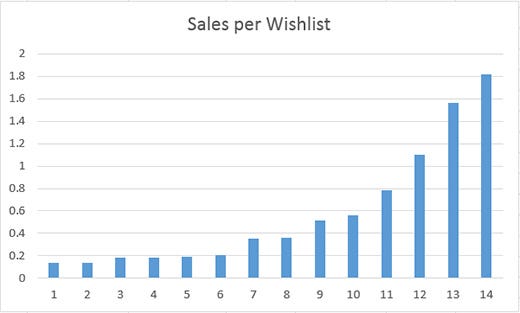 Now things start to get very interesting because we can say that if you had 10000 wishlists before launch then approx 10% of them will convert to sales at launch, which is 1000 sales. Then you can expect 4000 more “organic” sales for a total of 5000 sales in your first week (based on the wishlist sales to total sales ratio of 20%).

Which means that each wishlist is worth approximate 0.5 sales!

This is super-useful info, especially if you plan to spend money on ads to get wishlists.

Of course, there’s a big range in here. Worst case your 10000 wishlists might only generate 2% conversions for 200 wishlist sales which account for 33% of total sales. Therefore total sales = 600 and each wishlist equates to approx. 0.06 sales. A poor result but also pretty unlikely!

Best case would be something like 10000 wishlists converting at 31%, so 3000 wishlist sales which are only 10% or total sales. Therefore total sales = 30000! So each wishlist would be worth 3.0 sales in an unlikely scenario where everything was fantastic.

How many wishlists should I aim for?

This year at GDC I was in a meeting with some devs and a Valve rep and they said 50,000 wishlists would be a good figure aim for if you want featuring to kick in. Wow, previously I’d heard about devs trying to get 10K wishlists, and we struggled to achieve that with Shadowhand as we only got about 4000!

Ultimately you want your game to make a profit, or at least to break even. So if you know your total cost (and you should) then you can work out how many units you need to sell to break even.

Let’s say you need 10,000 units to break even in the first week, then you’d need about 20,000 wishlists according to my research (using the 0.5 sales per wishlist ratio).

For a $10 game that would mean $100,000 in gross revenue in the first week, or about $65K net revenue after Valve takes their cut and deals with sales tax.

Then you can use my week 1 x5 formula to calculate your year one revenue as per my recent blog post on the subject.

Well I hope you found that interesting. Please let me know your thoughts and feel free to email me any data that you want to share in order to improve my results. Thanks!